A visual Mexican artist collects arms used during violent times in his country and transforms them into works of art, to demonstrate how human beings have more powerful arms to convey their message in the form of images, literature, thoughts and words.

Originally from Jalisco, one of the Mexican states situated in the western part of the country, Álvaro Cuevas, 45, has an unusual artistic style: he transforms tons of arms, pistols, pump-action shotguns and machine guns, into works of art, in a country where violence occurs daily. Last year alone, violence claimed as many as 34,582 human lives.
The artist explains how this unusual artistic vocation came about: “It is the result of a long process of discernment on my personal history”. His reflection on his past and that of his family led him to this decision after seeing his brother, his cousins and his uncles dying, struck down by arms. His immense sorrow led the sculptor to ask what could be done to purify the arms: “When arms are inactive, they remain as they are, according to their purpose, but when they are transformed, completely different objects and concepts are created”, he tells us. 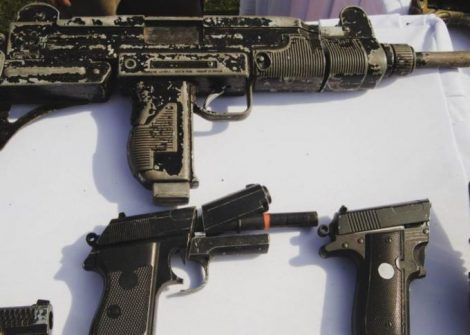 In this way, a new manner of confronting violence was born. He produced his first artistic works in 1998 and he began his professional career in 2006. The year 2017 saw a turning point when the Mexican National Secretary for Defence contacted Álvaro Cuevas and handed over to him thousands of arms that were impounded or handed in by citizens during campaigns of voluntary exchange, in line with his project of transforming instruments of death.
Cuevas took the twelve tons of arms he had been given and began to shape them into animals, children and fingerprints. The Mexican artist describes this work as ‘Impressions that leave their mark’. It is the result of two years’ work, joining up all the pieces and giving them a meaning and resulting in 21 sculptures. 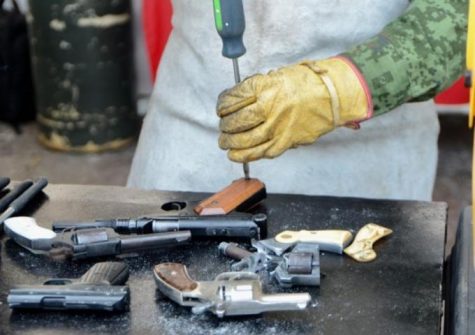 In 2018, the visual artist created the exhibition ‘Arms of Sensibility’. It comprises sculptures of such wild animals as deer, jaguars, rhinoceroses, fish and an eagle. “These are animals that kill out of instinct, unlike human beings who kill for pleasure”, the visual artist explains. Just to create the deer sculpture, he used 514 confiscated arms and it took him about six weeks to complete the work.
Soon afterwards, he opened an exhibition called ‘Fingerprints of Reconciliation’.  These sculptures are three metres tall and reproduce fingerprints. This series, exhibited “in places where conflict took pace. A conflict zone is a zone of death, robbery and harm”, the artist states. He therefore seeks to generate movements of healing, spirituality and overcoming challenges. Cuevas explains: “Mexico is armed. It is urgently required that people launch the other projectiles they have, those that are used daily the world over and that are more powerful, in such a way as to transcend arms: words, education, health, and art, for example. An explosion of the talents of the people”.
The city of Guadalajara received its first sculpture in the form of a digital print. It can be seen in the Prisciliano Sánchez quarter, where there have been attacks and murders. It, too, is part of this series, also exhibited in Guadalajara and the work has a special meaning for Cuevas. “This is the sculpture containing a cross. It also contains some of the arms used to assassinate Cardinal Posadas on 24 May, 1993″, the artist told us.
The sculptures of Álvaro Cuevas, created using arms, create an intimate dialogue with the viewer in order to generate a reflection on it. 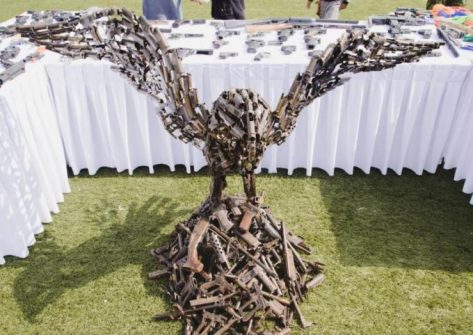 In one of the workshops organised by the artist, he exhibits a series of works in which children hold powerful arms in their hands: a book, a paintbrush and palette full of colours. Together with them, the artist increases awareness of education and builds the future of the children. “The message is that we are all ‘projectile’, because we can all ‘explode’, transcend and influence others. However, it is the personal decision of each one that makes the difference, whether to pull the deadly trigger or to develop one’s own talents”, says the artist.
In another of his recent collections, Álvaro Cuevas has built a projectile three metres high, so people can go inside it and be made more aware. Among others, the underlying questions are: What would happen if a real bomb like this one exploded? And how would we contribute or not to others if we killed one or more people?
Starting from painful personal and family experiences, and with the aim of transmitting a message of peace and reconciliation to the people of Mexico who suffer a high level of violence, the artist will continue his project with another 100 tons of arms he will receive from the National Secretary for Defence. Meanwhile, the Jalisco artist contacted the Institute of Alternative Justice (IJA) of the State of Jalisco, one of the most violent in the country, where the saddening Jalisco New Generation Drugs is present, and began a campaign to exchange arms and plastic arms for domestic appliances, among the 7.3 million inhabitants. In a short time, the artist collected more than thirteen tons of arms and more than twenty thousand plastic arms. Also in collaboration with the IJA, he created a mural depicting animals which, in fables, spread the culture of peace. Composed of five large sculptures, it was exhibited during a festival for children organised by the University of Guadalajara. 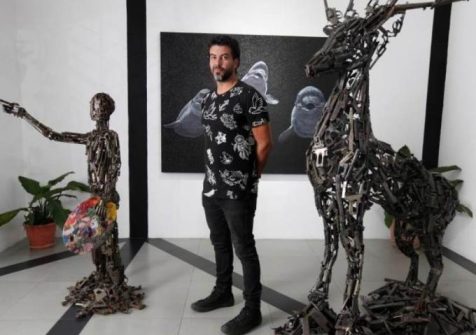 The artist has donated various works to a number of government bodies in the Mexican states of Jalisco and Yucatan, to be exhibited permanently. Other works make up an itinerant exhibition that is taken to cultural and civil events, in order for the message to reach the greatest possible number of people.
He also intends to distribute the new sculptures among the 100 universities in Mexico, so that the students may generate artistic proposals that may contribute to their unity as Mexicans: “Instead of arms that divide, we ought, on the contrary, join together through the proposals for transformation”, the artist explains.
Álvaro Cuevas told us of an episode that struck him deeply. After visiting one of his exhibitions, a man started to cry. He told us that: “His brother had been killed a month earlier. Until that moment he had been unable to cry and he thanked me for allowing him to express his sorrow.”
“Everyone has their own story and each one leaves their mark, whether visible or not, conscious or not. Art is communication, an invitation to reflect and a stimulus to build a better world, more just, peaceful and sharing”, the artist concludes.