The Tigray conflict has dampened the enthusiasm raised by the Ethiopian Prime Minister and Nobel Prize Abiy Ahmed three years ago. The UN wants massacres of civilians by the Ethiopian and Eritrean armies to be investigated.

On the 4 March 2021, the UN Security Council was warned of a dire humanitarian crisis in the Tigray region by the UN Under-Secretary-General for Humanitarian Affairs, Mark Lowcock, Accordingly, 4.5 million Tigrayans out of a population of 6 million need food assistance and much of the area is inaccessible. Lowcock spoke of a high risk of famine and escalating violence, four months after the conflict broke out in Tigray, when Prime Minister Abiy Ahmed ordered troops to respond to an attack on military bases by forces allied with the Tigray People’s Liberation Front (TPLF) which rules the region. By early March, the death toll amounted to at least 52,000, according to opposition sources and over 61,000 Ethiopians had fled into Sudan according to the U.N. 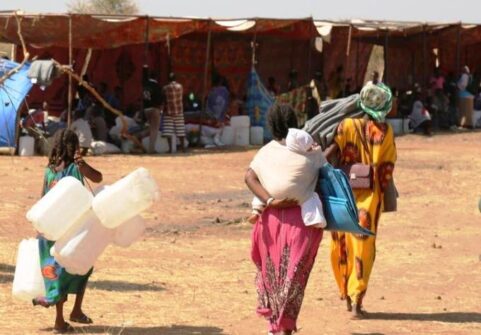 Tens of thousands of Ethiopians have been displaced by the ongoing conflict in the Tigray region. (UNICEF/Zerihun Sewunet).

On the same 4 March 2021, the UN High Commissioner for Human Rights, Michelle Bachelet called for an investigation into the atrocities which took place during the conflict including mass killings, rapes, abductions of civilians, destruction of offices, churches and monasteries. She corroborated information about the indiscriminate shelling of the regional capital Mekelle and of the towns of Humera and Adigrat during the Ethiopian offensive of November. On the 26 February 2021, another massacre was perpetrated in the village of Dengolat, North of Mekelle. According to Bachelet, such violations could amount to “war crimes and crimes against humanity”. Possible perpetrators include the Ethiopian National Defence Forces, the TPLF, the Eritrean Defence Forces (EDF), the forces of the neighbouring Amhara region which side with Addis Ababa and allied militias.In February, Amnesty International published a report which accused the EDF to have killed hundreds of civilians “including monks in the monasteries” in a “coordinated and systematic” manner in order “to terrorize the population into submission”, on the 28 and 29 November 2020 in Axum. “The massacre was carried out in retaliation for an earlier attack by a small number of militiamen, joined by local residents armed with sticks and stones” says Amnesty. According to a deacon at an Orthodox Church who spoke to the Associated Press, at least 800 people were killed on that weekend. 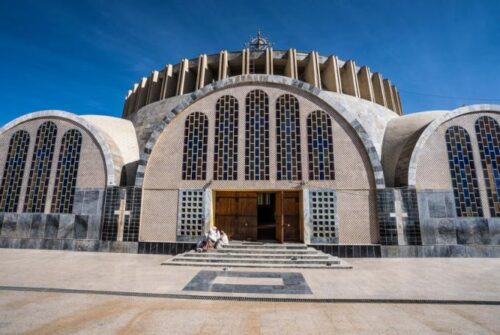 Church of Our Lady St. Mary of Zion, the most sacred place for all Orthodox Ethiopians in Axum, Ethiopia.

These events in Axum were the culmination of a wave of violations carried out since 19 November, when Eritrean and Ethiopian forces entered in the city, after shelling the city and firing at those who tried to flee, says Amnesty. The report was denied by Eritrea’s Minister of Information Yemane Gebremeskel who called it a “fabrication”, reported the Voice of America on the 27 February. Ethiopian and Eritrean officials also denied that Eritrean forces were involved in the Tigray conflict, despite accounts who identified Eritrean soldiers by their dialects.
“Eritrean Defence Forces must leave Ethiopia, and they must not be enabled or permitted to continue their campaign of destruction”, said the UN Under-Secretary-General for Humanitarian Affairs. But the UN Security Council failed to reach consensus on the issue on the 4 March 2021. Previously, the United States also called on Eritrean troops to withdraw from Tigray, while the EU declared that their presence was “exacerbating ethnic violence” in the region. 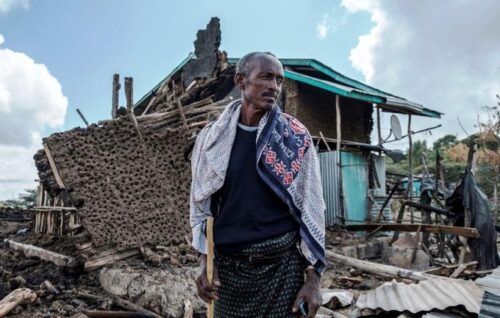 However, to some extent Eritrea’s involvement in the Tigray conflict is  “explainable”, claims Nathanael Tilahun, assistant professor of Law at Coventry University. First of all, the relationship between the TPLF and Eritrea are bad. At the beginning, they were intimate movements.
Both were led by Tigrayan Christians and were Marxist. They remained allies since the creation of the TPLF in 1974 during their common war against Colonel Mengistu’s DERG regime. EPLF troops helped the TPLF during its victorious offensive of 1991.
But relations became tense when both movements became rulers of their respective countries.
The EPLF which claimed to be an older and better run organisation, and the TPLF, ruler of a much larger country did not sort out their ” big brother-little brother  quarrel “. Things ended up with a border conflict launched by Eritrea in 1998. It was only in 2018, with Abiy that Ethiopia and Eritrea set normal relations.
Eritrea’s involvement in the Tigray conflict was foreseeable after the TPLF attack on the ENDF headquarters in Mekelle and on the four other military bases in Tigray on the 3 November 2020. Prime Minister Abiy Ahmed accused the TPLF of dressing its soldiers in uniforms resembling those of the EDF to “implicate the Eritrean government in false claims of aggression against the people of Tigray”. Then, the likelihood of Eritrea’s involvement increased after Prime Minister Abiy told the Ethiopian Parliament that ENDF soldiers who survived the TPLF attack of the 3 November had been ordered to withdraw into Eritrea. 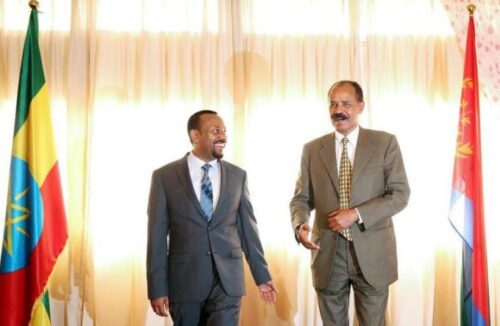 Before that, in the run up to the conflict, elite Ethiopian army units were sent already into Eritrea as part of a security pact between both states, wrote the former Eritrean Defence Minister Mesfin Hagos in an article published by African Arguments on the 4 December 2020. These units were expected to be the hammer and the ENDF Northern Command the anvil to strike the TPLF. Then, more ENDF troops were airlifted into Eritrea after the outbreak of conflict.  Local sources in Asmara counted 30 military airplanes flying in thousands of Ethiopian soldiers, before TPLF’s rockets hit the Asmara on the 14 November.
The Eritrean army’s response was massive. Eritrean support units provided intelligence and logistics to the Ethiopian troops’ offensive into Tigray, before taking part massively in combat. According to Mesfin Hagos, at least three Eritrean mechanized divisions and eight Eritrean infantry divisions entered into Tigray.
Without Eritrea, it would have been difficult to defeat the TPLF and regain control of the main cities of Tigray by end of November 2020, say Abiy’s supporters. When the war broke out, the TPLF was a ” formidable military force taking possession of more than half of the country’s military equipment “, reminds Tilahun. The TPLF could have marched on Addis Ababa, without much resistance.
Clearly, the Eritrean President, Isais Afworki finds now himself in a position of king saviour, say analysts. De facto, Abiy owes him the survival of his government. According to Alex de Waal, the executive director of the World Peace Foundation, ” It’s now clear that Afwerki saw the peace deal as a security pact with Ethiopia to eliminate the Tigray People’s Liberation Front’s (TPLF) leadership”. 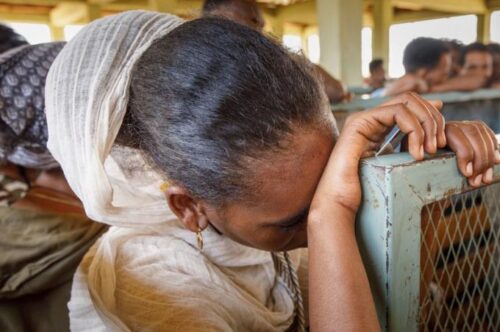 Another consequence of the war is the damage inflicted to the image of the Ethiopian Prime Minister who was awarded the Nobel Peace Prize in 2019, for having brought to an end the military tensions with Eritrea. He is now under the pressure of the West, namely United States whose ambassador at the UN, Linda Thomas-Greenfield declared that “The onus to prevent further atrocities and human suffering falls squarely on the Ethiopian government’s shoulders”.  The European Union suspended its budgetary support to Ethiopia in February which disappointed Ethiopian Diaspora Associations in Belgium and Luxembourg. In an open letter sent by their coordinator, Zerihun Assefa, to the president of the European Parliament, David Sassoli, they express their concern after a debate on the situation in Tigray on the last 11 February and deplored the “unfounded accusations that the government of Ethiopia was using humanitarian aid and sexual violence as weapons of war”.
The letter went on: “We were also disappointed after waiting in vain for anyone to point out that the conflict in Tigray was an insurrection by the TPLF in which scores of unsuspecting EDF personnel were gunned down in their sleeps and their weapons and supplies confiscated. Neither have we heard even a passing remark about the callous massacre of innocent civilians in Mai Kadra by TPLF-associated militia”, who are suspected to have killed 600 people mainly from the Amhara ethnic group. 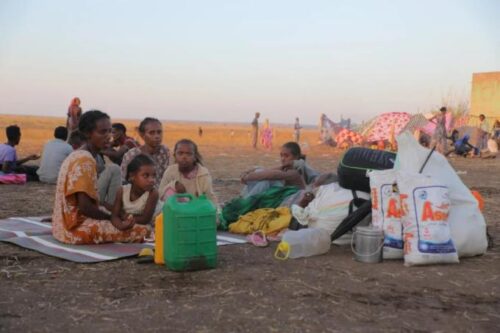 These tensions with the West and the UN add to the Ethiopia’s diplomatic problems. Relations are indeed becoming very tense since mid-December with neighbouring Sudan. whose authorities deplored that a border patrol unit was ambushed by “Ethiopian forces and militias” in the disputed area of Al-Fashqa. Then, in mid-February, Sudan summoned home its ambassador to Ethiopia, while both sides were accusing each other of seizing territory by force. The Sudanese authorities reported at least a dozen deaths, including some soldiers, due to incursions by Ethiopian militias.
All this context may not bode well for the future of the difficult negotiations concerning the filling of the reservoir of the Great Ethiopian Renaissance Dam on the Blue Nile, between Egypt and Sudan on the one hand and Ethiopia on the other, as both Arab countries want to involve alongside with the African Union, the EU, the US and the UN which are all at odds with Ethiopia over the Tigray issue.