They live today almost the way they could have lived one or two hundred years ago, and this way differs a lot from that of their neighbours. We look at the main traits of their culture by analyzing the fundamental stages in a person’s life: birth, puberty,
marriage and death.

Birth. It is remarked with horror by neighboring tribes that Gumuz women give birth ‘alone and in the forest’. Is it just a simple rumor or the fruit of prejudice? Gumuz women do give birth outside the home. It could be a short distance away or perhaps next to it, but always outdoors. There are two reasons that explain this practice. The first is that giving birth is a test of courage. A woman has to face it alone and has to do so with determination and skill. She must cut the umbilical cord and wash the child herself, since bearing the pain with fortitude is an honor for a woman. The second reason is related to the taboo of blood. If blood ‘sullies’ the house, it would lead to misfortunes such as the child’s death or deformity. 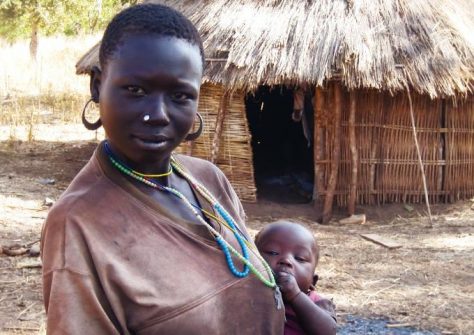 Puberty. The first menstruation of a girl is a public event and a feast for the village. She is decorated with lots of colorful necklaces and has her newly-developed breasts uncovered. Her girlfriends are also dressed this way when accompanying her. They pay visits to houses in the village and each family gives them something: a chicken, some money, perhaps even a goat.
As night falls, they gather to eat meat, drink local beer and dance. A young girl who has just started menstruation has a series of taboos to respect: she cannot enter her parents’ house and she cannot cross other people’s land. Even after marrying, all women who are menstruating have to follow certain rules, although these vary from one area to another. It may include sleeping in a different house, not opening or closing the front door and such like. They must always take great care not to approach the central pole of the house; otherwise the spirit that lives there will punish them.

In traditional Gumuz culture, women are not circumcised. Female circumcision is only practiced in some areas bordering Sudan, probably under Muslim influence. Boys, on the contrary, are all circumcised when they are between 5 and 9 years old. No boy escapes this rite of passage. If they are not circumcised they cannot marry; an uncircumcised man is not a real adult.
Marriage. Traditionally, there are four basic forms of marriage among the Gumuz: sister exchange, elopement, kidnap and paying a dowry. Sister exchange is the most common form. Any man that wants a wife must give a sister, daughter or other woman from his family group in exchange. Apart from the wedding expenses, no dowry is paid by either party. The second form, elopement, is also frequently practiced. A young man and woman who love each other decide to marry. But, as this is not possible either because the parents do not approve, or because the young man does not have a woman from his family to give in exchange, they run away together. Later, they may contact the elders to resolve the situation. A solution is found when the family of the young man finds a woman to exchange, or promises to provide one when she is found. 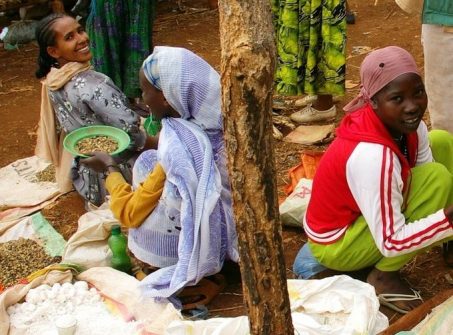 The third form is kidnapping. It is different from elopement because the young man takes the girl by force and rapes her. It is a serious criminal offence that frequently leads to bloodshed between families or clans. The way it is resolved is similar to that of elopement.
The fourth way, paying a dowry, was rarely practiced among the Gumuz. It has been recently introduced through the influence of neighbouring peoples. Here, a dowry is paid for the bride in accordance with customary criteria. The amount that must be paid is high, that is why this type of marriage is reserved for the rich and powerful. Girls are given in marriage when they have barely reached puberty. This means that, when they stop being children they are already wives with their first child on the way.
Illness and death. The government has made an effort to open health centres even in the remotest villages but the Gumuz do not go to them. They normally prefer to visit a traditional witch doctor or gafia. The problem is that, when the witch doctors are unable to do anything, the health centres cannot either, because they are badly served and poorly stocked with medicines. Going to a hospital, particularly if it is for an operation, is beyond most people’s reach. The Gumuz have a short life cycle. You see very few old men and even fewer old women. They do everything fast: they marry young, have children young and die young. 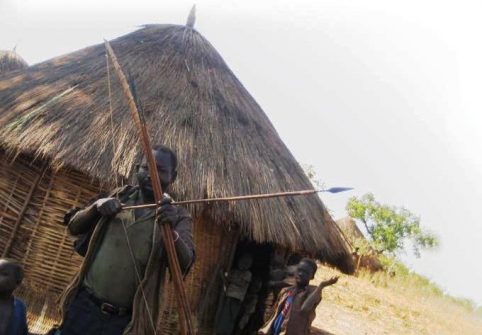 Death is very present in the daily life of the Gumuz because almost everyone dies at home, for all to see. But not all deaths are seen in the same way. If the person who has died was old, had children and had seen the children of his or her children, the death is not really a cause for mourning, but rather a celebration. They have fulfilled everything expected of them. So people dance. If the person who dies is a child under four years of age, the celebrations are small and limited to the family circle. He or she was just a child and there is no reason to grieve for them. In contrast, the death of a young person, between 4 and 40 years of age, approximately, is considered outside the natural rhythm of things and there will be no dancing or singing. Forty days after the funeral, the so called ‘teskar of the bones’ is held; this celebration is more solemn than after the death itself as there has been time to make preparations and people have been notified in advance. The funeral of an elderly person is one of the biggest events in Gumuz social life and surrounding villages literally empty in order to participate. The grave is deep. The body is carefully wrapped in cloth so the earth does not touch it. They do not use a coffin. After the burial, in the following days, the family will return to the tomb to offer drink or food, to light a fire, etc. They believe that, if they do not follow these rites, the dead person will take revenge. He or she is seated on top of the roof of the house and watches what is done. However, despite these signs of a reverential fear, there is no clear idea of personal survival after death.
If questioned about the existence of a life after death, the answer would be most surely negative.
(J.G.N.)