It is a country with over 10 ethnic groups, each with different cultural traditions and beliefs. The dance represents one of the highest cultural performances of these cultural groups.
A glance at some of the dances.

In the central region of Malawi live the Ngoni people and they are around 750 thousand people in all. One of their famous dances is called the Ingoma. It was originally a war dance performed after a successful battle.
The men in the Ingoma are dressed in an elaborate and decorative way. Their costume includes headgear made of feathers, ornaments worn on the limbs, a network of beads wrapped across the chest and stomach, and around the neck various types of animal skin hang. They carry a spear or club, and a shield. The women instead wear an ordinary Chilundu (a piece of cloth) from the waist downwards, and a blouse and headgear called duku. In the Ingoma dance, men dance in straight lines while women form lines on the side of the men.
The men sing and stamp their feet, wielding their shields, spears and clubs symbolising a war scene while the women sing, clap and ululate in unison with the men’s dance performance. 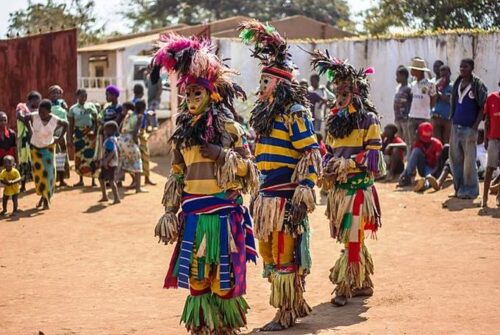 The Chewa people live also in the central region of the country.  One of the important dances of the Chewa is called Gule Wamkulu (‘great dance’).  The people involved in the dance are believed to be communicating with the ancestral spirits as part of the religion. The Gule Wamkulu ritual includes songs and dances performed by masked individuals disguised as animals. It is a symbolic representation of the invisible spirit world performed for various events, such as initiation ceremonies, healing rituals, funerals, and so on.
The Gule Wamkulu dance was, and is, a secret cult which the Chewa people highly respect. The people who perform this dance are only those who have been initiated into Nyau tradition and the dancers are all men. 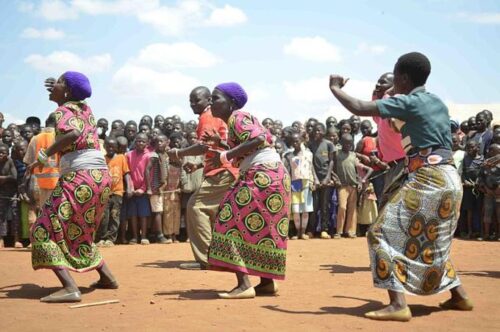 The Chisamba dance, instead, is a female initiation ritual which is a complement of the male initiation in Gule Wamkulu. Its purpose is to turn girls into attractive women and takes place at a tree of maidenhood (Mtengo Wa Anamwali). Here, girls receive instructions on the protocols of womanhood. The Chisamba dance is led by a senior woman, usually the chief’s sister and known as Namkungwi. This dance is also performed at the funerals of chiefs and important individuals in the village.Another common dance among the Chewa is the Mganda dance. This is probably the second most popular dance after the Gule Wamkulu, among the Chewa.
It is primarily an entertainment dance performed during wedding ceremonies. The dancers are usually in a group of 6 to 10, sometimes more, with a drummer in front of the dancers.
Men who form two or three lines facing in the same direction perform it but, as they dance, they systematically face all directions. The dancers hold small flags and a ‘badza’ (made from a gourd).
During wedding ceremony performances, entertained viewers throw money to the most entertaining dancer.
The Mganda is also performed merely for entertainment at functions such as political party rallies. 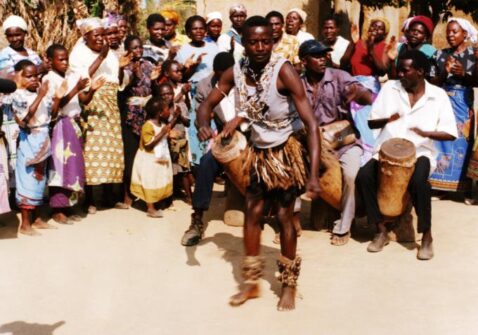 In the north of the country among the Tumbuka people, a popular dance is called the Vimbuza. It is a healing dance. After being diagnosed, patients undergo a healing ritual.
For this purpose, women and children of the village form a circle around the patient, who slowly enters into a trance, and sing songs to call helping spirits. The only men taking part are those who beat spirit-specific drum rhythms and, in some cases, a male healer.
Singing and drumming combine to create a powerful experience, providing a space for patients to ‘dance their disease’. The Vimbuza healing ritual goes back to the mid-nineteenth century, when it developed as a means of overcoming traumatic experiences of oppression, and it further developed as a healing dance.
For the Tumbuka, the Vimbuza has artistic value and a therapeutic function that complements other forms of medical treatment. It is still practised in rural areas where the Tumbuku live and is performed by both men and women, usually at night.
The Sendemule is a traditional dance performed by the Balambia people of Chitipa in northern Malawi during funerals, chief installation ceremonies, and for entertainment. When it is performed at funerals, the songs are appropriately mournful, and when it is performed at a chief’s installation ceremony, or when a dangerous animal like a lion is killed, the songs depict triumph. Today the Sendemule is performed at many social gatherings, where the dancers usually dress casually. 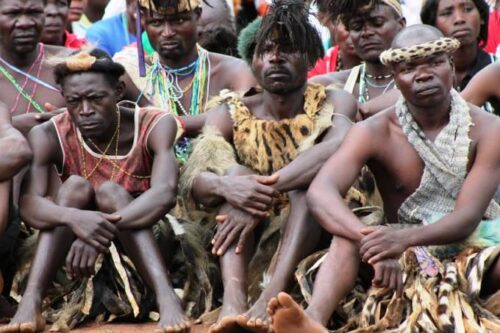 At each New Year’s Day, men and women congregate at the village arena to entertain the village with the Chilimika dance. Photo. Fotoferm/123RF.com

In the Nkhata Bay District in the Northern Region the Chilimika (meaning year) is performed mostly by Tonga women and youth.
At each New Year’s Day, young men and women congregate at the village arena to entertain the village with the Chilimika. It is actually a very humorous dance and is mostly performed by men.
The Manganje is an initiation dance performed by the Yao people in the central and south region and is performed at the initiation of boys. When boys (initiates) leave for, and then come out of the (Jando) enclosure, the dance is performed to celebrate the occasion. Today the Manganje is also performed for entertainment.
In the south, among the Lomwe people the Tchopa dance is performed. In the past the dance was performed during a tribal war as well as the Nsembe (sacrifice offering) ceremonies when a calamity has struck. During tribal wars, men used to dance, informing the folks that they were back with news of victory. It is now mostly performed for entertainment. Another popular form of dance practiced in the villages around the country is the Chitelera. It is mostly performed for entertainment on full-moon nights by young girls, but is also used as a form of inter-village competition. Teams of girls travel to neighboring villages to see which village has the more talented dancers. The girls form circles as they dance.