The suburb of Mukuru is home to about 600,000 people. This area, which is experiencing severe urban decay, grows around the financial centre of Nairobi, the Kenyan capital. Right there in the suburb, the Sisters of Mercy have set up the Mukuru Promotion Center (MPC).

Dicson’s house was flooded again a few days ago. The young Kenyan has lost count of how many times water has come in through the rusty brass entrance door of his house damaging everything that was inside.  But Dicson is prepared by now. Each morning, before leaving home to go in search for work, he puts all his belongings on his bed in order to protect them from water. Dicson lives in Mukuru, a slum that houses 600,000 people, who live in substandard shacks mainly made of mud, brass
and corrugated iron. 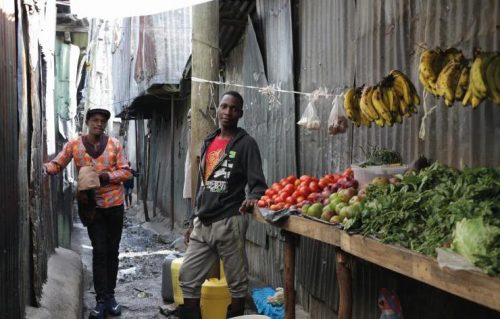 The Mukuru slum was built on the banks of the Ngong River. The need to find a land where to construct their flimsy buildings led people to steal the land that belonged to the river. The Ngong river narrows as the slum grows, although sometimes, when it rains heavily, the river claims what has been taken away and causes landslides that move the shacks close to the shore. As a matter of fact, it rains daily and heavily. “In October rains are supposed to stop, but they have not this year, and so this week several schools were closed because they were flooded”, laments Sister Mary Killeen, a religious of the Sisters of Mercy.
“The Ngong river is increasingly dirty and contaminated”, says the Irish nun and she puts the blame on the non-existent political will to stop the pollution of rivers and air. The victims of the contamination affecting the slum arrive every day at the clinic of Mary Immaculate, which was also established by the  Sisters of Mercy in order to meet the health needs of the most vulnerable population. “Every month we take care of more than 1,200 people, most of whom are affected by respiratory, gastrointestinal and digestive diseases”. Diseases caused by environmental factors such as poor sanitation, lack of access to drinking water, no waste collection and the burning of kerosene and coal for cooking. 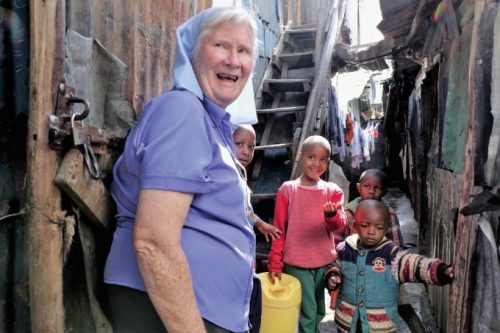 Mukuru is a place where poverty is perceived with all five senses: people can see it, hear it, smell it, touch it and taste it. The people who arrive here are those who try to escape from an uncertain future by moving to Nairobi in search of the promised land. Many of them flee from tribal conflicts and clashes over land, livestock or political power. Others flee from hunger due to scarcity of food as a consequence of drought. “In Kenya, the desert is advancing rapidly, and some green land has turned into desert over recent years, so, many people abandon their land in search of a better life in Nairobi, but the problem is that they are not skilled enough to find a job that can guarantee them a decent standard of life, and so they end up living in a slum”, Sister Mary explains.

Those forgotten by the establishment
“Mukuru is the place of those who have been forgotten by the establishment and society. Despite all this, however, we have been able to verify that life is present in every street and in every corner of the slum. Despite all difficulties you can see people laughing, dancing, chatting, cooking the little food they have, making all kind of garments by using sewing machines. The Mukuro slum proves to us that people, even in the most adverse conditions, want to live and not just survive. 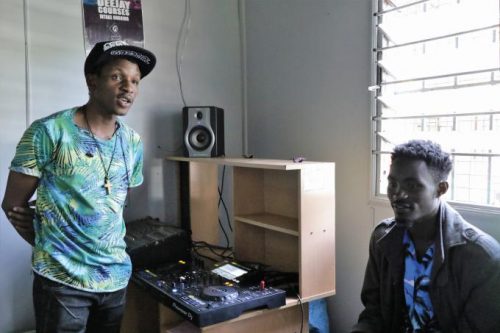 Music has been the salvation for several young people of the slum. Music is the universal language with which human beings communicate their deepest feelings, fears, joys, hopes, denunciations, love and heartbreaks. Emmanuel, who proudly bears the nickname of ‘the Preacher’, and Boaz, a DJ, have been saved by music, which kept them far from alcohol, drugs and the dangers of mafias”, says Sister Mary. She and the Sisters of the mission have always supported the two young men’s interest in music, and now Emmanuel and Boaz in turn, use music to help other young people to stay away from the dangers of a life in the streets.Sister Mary Killeen has been living in Kenya for over 40 years. She and the other nuns of the Sisters of Mercy have been accompanying the poorest and the forgotten of Mukuro for decades.
The Sister’s main objective is to save, through education, children from drugs, violence and prostitution. 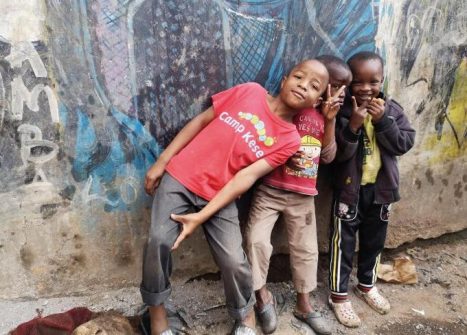 While entering the narrow alleys of the slum, the religious tells us that, since 1985, the slum has grown rapidly and so the number of out-of-school children . “That is why we had to intervene quickly, because children who do not go to school end up in the street getting involved with drugs or becoming victims of child prostitution”, Sister Mary Killen explains. “We had neither land nor money to build schools. But thanks to the parish priest and the help of other people, we were able to establish six temporary schools”, the Irish religious recalls. This happened in the early 90s, those schools are still functioning today in the different areas of the slum and are attended by more than 10,000 students every day. Over the years many other projects have been implemented by these nuns, such as a secondary school, education activities for adults, reintegration and support programs for street children, a care centre for children with different disabilities, a vocational training centre, a clinic and three mobile units. The Mukuru Promotion Center has become a centre of attention and development.