Along the centuries, food and plants coming from America, and in particular from Mexico have given a great contribution to the Mediterranean diet.

The first people to bring back information about the food and plants of the Americas were early explorers and conquistadors, some of whom showed a special interest in the vegetation of the New World.
Spain was the first stop for Mexican plants on their route to dissemination throughout Europe. After their arrival, they spread along two different paths: some plants prospered in northern Europe, while others adapted better in the warm climate and loose soil of the Mediterranean basin. 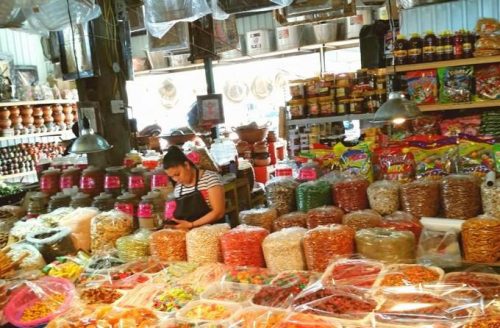 The latter group arrived first in Italy, which is not surprising since the Spanish crown dominated large parts of the Italian Peninsula in the sixteenth century, facilitating contact between the two areas. Corn or maize, for many centuries a staple food in Mesoamerican Indian cultures, along with beans, the traditional accompaniment for tortillas, prospered in the Mediterranean. Chili peppers and tomatoes, a flavor combination characteristic of Aztec cuisine, also adapted to the new environment. Other Mexican plants that prospered in the new habitat were squash, the sweet potato, the agave or century plant and the prickly pear cactus, which now forms an integral part of the local landscape. 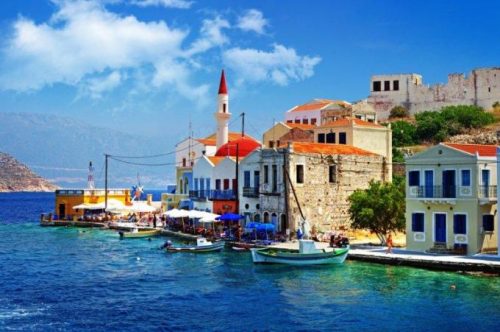 The well-established trade routes set up by Spaniards many years before were important factors in the spread of American products. Aragonese merchants controlled commerce between Spain, Italy and the Far East and no doubt played an important role the distribution of plants along routes. The Turks also took them to the whole eastern half of the Mediterranean basin, dominated in the sixteenth century by the Ottoman Empire. The early nomenclature given to the newly arrived plants reflects the Turkish role in their dissemination.
Corn first appeared in Europe herbals under the names ‘Turkish grain’, ble de Turquie or ‘Turkis korn’; the chili pepper was known as ‘Turkish red pepper’; the squash was called ‘Turkish cucumber’ and even the wild turkey, which arrived England in 1511 still goes by the name of ‘turkey’ in contemporary English.

During the early Middle Ages, a distinct diet was formed in the Mediterranean basin, based on bread, olives, wine. There were certain regional variations in the diet such as the thick soups of southern France, Italian pastas and Turkish yogurt, but a certain uniformity in the diet became evident from early times and has continued until today. Mexican plants did not however arrive in the area as competitors of the traditional crops that had developed over the centuries. Rather, their role was complementary. While wheat and other grains were planted in autumn and winter, maize, beans and squash were planted in the spring and did not encroach upon the space needed for the traditional plants. Nor were their harvests incompatible, since wheat was generally cut in June and grapes and olives were picked in the fall, whereas American crops were harvested at the end of summer. 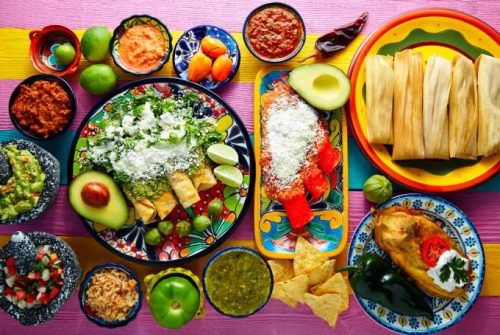 Initially the new plants could only be grown in small family plots or gardens as most American plants developed as semitropical crops that require moisture during the growing cycle and the formation of the fruit. In the hot, dry Mediterranean summers, the new plants needed artificial irrigation in order to produce fruit, and this was only possible on small plots of land. This was never a problem for the traditional plants of the area because they had evolved in semi-arid zones of the Middle East and needed humidity after being sown in the winter, but did not need water during the final months of their agricultural cycle which were in the summer.Mexican plants offered several advantages over European crops. For example, beans are well known for their ability to enrich the soil since they have the capacity to fix nitrogen in the earth through the small nodes on their roots. The overworked and exhausted soils of the Mediterranean were badly in need of enrichment and improvement. Mexican plants also played a role in crop rotation, another method of soil improvement, since the same grain could not be sown on the same land for more than two consecutive years because of the depletion of the land’s humus level.
Some plants proved to be more easily accepted due to their similarity with those already known in the area. This was the case of the Mexican bean that looked like the European fava bean, known since Romans distributed it throughout the Mediterranean basin during the expansion of their empire. Spaniards knew them as fesoles and gave them the same name when they came upon them in the Caribbean. Some years, later, the name was changed to frijol and they are still known by that name in Mexico today.
The corn plant has little similarity with other grain plants, but its preparation in the form of ground flour in breads and gruels gave it an air of similarity with other cereals. Corn meal was mixed with other bread flours to make coarse, rustic breads for the poor. It also became a substitute for millet in Italian polenta, an ancient Roman dish that had sustained poor Italians for centuries. Corn offers several advantages over other grains: it produces more calories in less space, in less time and is less labour-intensive than any other grain except for rice. It adapts easily to a wide variety of climates, soils and altitudes and can be used as animal fodder as well as for human consumption. 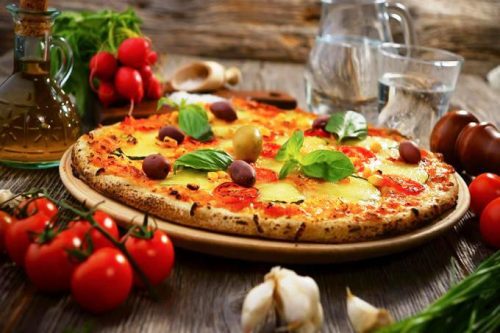 The chili pepper and the tomato arrived as strange new plants and were regarded with deep suspicion. They acquired the reputation of being hallucinogenic and poisonous since they belonged to the same plant family as the mandrake, henbane and belladonna. They also soon became well known as effective aphrodisiacs. Both these plants were completely new to the Europeans; they had never seen any fruits that even looked like them. They did not know how to grow them, prepare them for the table or even how to go about eating them. Chili peppers were spicy and pungent so that they were difficult to eat. Italians were afraid to eat tomatoes raw, fearing they might be poisonous, but when cooked, they were unappetizing and appeared to be spoiled. They were also said to have a ‘foul’ smell. It was not easy to adopt these plants and incorporate them into the Italian diet. Furthermore, the large, red, smooth juicy tomatoes we know today have little similarity with the small, ridged, pale, acidic and strong-smelling tomato that arrived in Europe in the sixteenth century. It was the caring hands of Italian gardeners that transformed the tomatoes into the edible and attractive fruit we know today. They also modified the chili pepper, converting it into a large, sweet-tasting vegetable without the pungency characteristic of Mexican chili pepper. Transformed into ‘green peppers’, they could be consumed as vegetables and were used for stuffed peppers, a popular dish in the eastern Mediterranean. The chili pepper was introduced into Hungary by the invading. Turks in 1526 and was given the local name of paprikas or paprika and is a dominant flavor in Balkan cuisine.
During the eighteenth century, Mexican fruits and vegetables became incorporated into European diets. Many changes occurred in European cuisine during that time. A new social class developed due to the prosperity attained from commercial activities of the time. The new bourgeoisie favoured a simple cuisine, based on regional dishes, as taste was no longer dictated by the nobility and a life centred around the royal court. New World flavors combined well with the local dishes and cooks began incorporating new ingredients into established local fare. They did not invent new or exotic dishes with them, rather they learned to use them as useful elements in traditional dishes.

The red colour of tomato sauce

Corn and potatoes were added to local soups, stews and other typical dishes. The frijol or Mexican bean became a substitute for the roman fava bean in such dishes as fabada asturiana of northwestern Spain and in the cassoulets of France’s Provence. Italians living around Florence adopted the bean with such relish that Italians in the rest of the country began to refer to them as mangiafagioli or bean eaters. Neapolitans discovered that tomato sauce blended well with pastas, previously served with sauces made with olive oil or butter. Italian pizzas also benefited from the new flavor and bright red color of tomato sauce. The flavor combination of tomatoes and green peppers has been documented in salads typical of every country surrounding the Mediterranean basin. 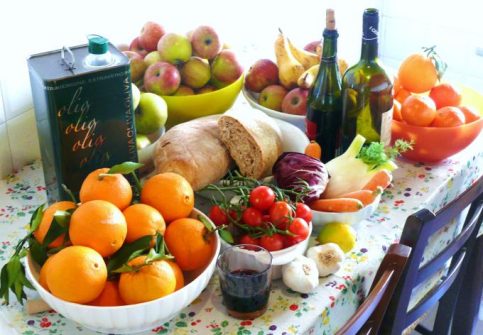 Southern Spain’s gazpacho, an ancient soup known from the time of Arab occupation in the region, suddenly acquired a new presentation with the addition of tomatoes and green peppers. Valencian paella incorporated several Mexican ingredients into its preparation, as did the codfish dish, bacalao. By the end of the eighteenth century, Mexican plants were fully incorporated into the diet in several Mediterranean countries.
During the nineteenth and twentieth centuries, these plants, modified and improved by Europeans, were reintroduced into the New World as part of the cultural baggage brought by European immigrants who wanted to recreate their native diets in their new countries. Italian immigrants in the United States, Canada and Argentina brought new uses for the tomato as canned tomato sauce to accompany pasta dishes. They also brought green peppers and a new method of eating squash as a young, immature vegetable, which they called ‘zucchini’.
Finally, Mexican plants were incorporated into the Mediterranean diet. They contributed toward a more nutritious diet, made food more abundant and thus helped reduce effects of hunger that had plagued Europe for centuries. Some historians consider them to have played an important role in the population increase that became evident in the second half of the eighteenth century. Their ability to complement the ancient Mediterranean crops during the agricultural cycle as well as in the diet contributed toward their final acceptance. Today, they are identified with the Mediterranean diet as the areas older plants, such as wheat, the olive tree and the grapevine.