The cancellation of the effective reforms imposed during the decade in which the social-democrat government was in power, gave rise to serious public protests culminating in an armed revolt in 1960 that was led by a conspicuous group of military people who remained faithful to Arbenz. It was joined by workers, union groups, and students and also professionals besides the poor classes and Maya peasants scattered throughout the rural villages.

The revolt was put down in blood by the army but many of the leaders succeeded in escaping abroad where they nourished growing resentment against the government and increasing radicalisation that led to the formation of armed revolutionary groups, inspired by the Cuban experience. In 1968, the American ambassador was the victim of assassination and this was followed by another escalation of terror by both factions until, following the coming to power as president of the Republic, in July 1970, of General Carlos Manuel Arana Osorio, the repression was systematically inflicted on thousands of Indian peasants accused of supporting the guerrillas or of sympathising with them. This was but the prologue to an even more bloody wave of violence in the years that followed. 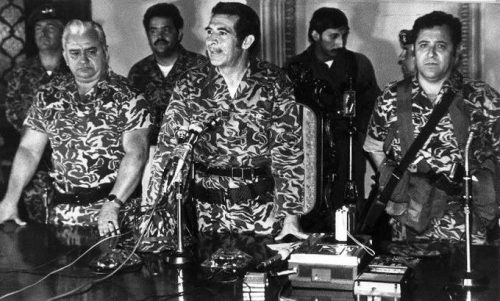 In the late eighties, the violence intensified, culminating in the extermination of the Maya community by the army led by the dictator Efrain Rios Montt. On that occasion, the government used a new strategy supported by the new ‘doctrine of national security’ which, besides legitimising the indiscriminate violence by the state against anyone seeking social justice, did no longer engage in selective repression but the direct repression of the masses, implementing a truly systematic plan to eliminate entire Maya communities. This genocide took place before the indifferent eyes of the entire international community, genocide that no one, not even civil or Church movements, could stop; genocide that spared neither women, children nor the elderly. The aim of preventing the spread of communism and a possible Soviet-style government on the borders of the USA was, in fact, considered more important than respect for human rights. Consequently, to guarantee national security by means of the appropriate doctrine, anyone who took an opposing stand was subject to elimination.
All forms of opposition were seen as cultivation grounds of the ‘enemy within’ and even the work of many priests for the defence of the weakest was considered subversive. 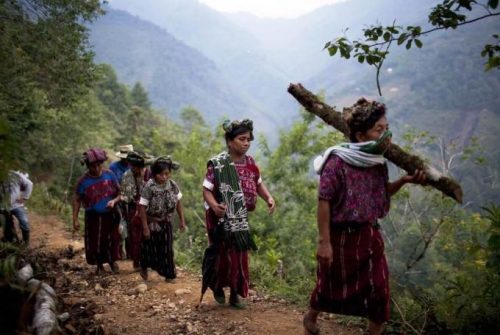 Despite the large amount of aid given by Washington to the government army, both in terms of weapons and of finance, and the anti-insurrection units specially trained by the US ‘Green Berets’, many localities of the urban centres were controlled by groups of guerrillas. Guatemala had become a country broken in two by dividing lines that changed according to the outcome of clashes between government troops and the rebels. Efrain Rios Montt was replaced in August 1983 by Oscar Mejia Victores, former minister of defence. Faced with the strongly critical situation that had been created, the new President appointed by the men in uniform should have known that it was necessary to restore civil and political rights so that the country could return to a minimum of normality. It was only with a return to constitutional legality and, therefore, only with the support of parties and civil authorities that it would be possible to defuse the deep social tensions and stem the activities of the extreme left.
So it was that, after fifteen years under a military regime, in July 1984 proper elections were held which were won by the Christian Democrat party with a relative majority.
It took more than ten years for the army to stop the death squads from attacking the indigenous communities and the guerrillas, in turn, decided to cease hostilities and sign a peace  agreement. 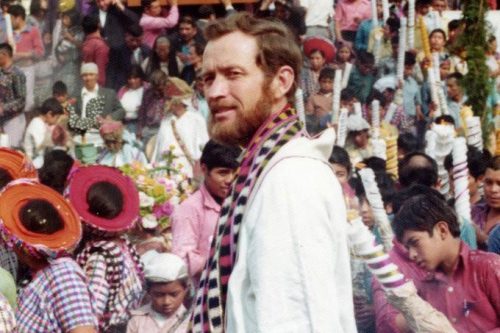 In 1996, under pressure from the international community and the work of the UN, the parties to the conflict met in Oslo to agree upon a cessation of hostilities. At the same time, a Commission for Historical Clarification (CEH) was set up with the mandate to reconstruct the unfolding of events during those years and to promote reconciliation on the basis of historical truth. The enquiry ended in 1999 with an official report presented by the same Commission from which an even more terrifying account emerged. The Commission also showed that the killings, that included 626 episodes of the massacre of harmless civilians by government forces, were caused only marginally by military action against guerrillas, classifying the vast majority of the cases, such as that against the Maya population, as crimes against humanity.
The signatory of the peace agreement was President Alvaro Arzù Irigoien, elected in 1995 with a centre-right government with very little room for manoeuvre due to restrictions caused by the extreme right, expression of the military leaders who had been the leaders in those atrocities. However, in 1999, with the victory of the Guatemalan Republican Front (FRG) which put Alfonso Portillo Cabrera in power, the situation again became complicated because the new president, abandoning all the promises made during the election campaign, immediately saw to it that the leaders of the army and the police were officials involved in the repression unleashed in the past against the guerrillas and the Indian communities. This action only served to reopen the wounds of the civil war at a time when the country was coming to terms with a devastating economic crisis. A large proportion of the population was living under the poverty level, making do with means of subsistence and various forms of traditional barter. 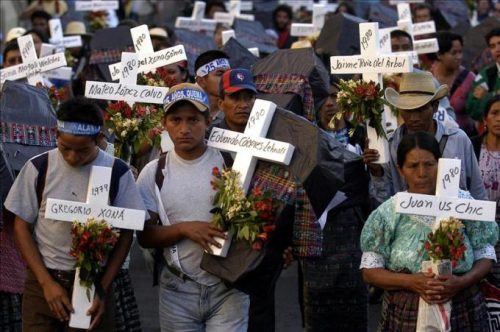 Besides, there were in the country those who were growing rich through the drugs trade and the trafficking of children legalised by the government through a series of agreements between poor, local families and families in the USA who paid cash to adopt children. The climate was rendered even more explosive by the bands of paramilitaries who had formerly fought against guerrilla forces and now claimed some financial recompense for their past services.
The insecurity that was again being generated and miserable living conditions forced many to cross the borders of the country and migrate towards Mexico and the United States where more than a million Guatemalans legally settled, even if thousands of them were, from time to time, repatriated by the US authorities.(F.R.)