Cous cous, a popular emblematic dish of North Africa, has been placed on the list of intangible cultural heritage by Unesco, at the joint request of Algeria, Morocco, Mauritania and Tunisia.

It was something quite rare in the history of the Maghreb countries when Algeria, Morocco, Mauritania and Tunisia, in March 2019, together presented the candidate entitled ‘Knowledge, know-how and practices relative to the production and consumption of cous cous’, with no dispute concerning the paternity of this traditional food.
The initiative raises the hope that the dish may be the beginning of political rapprochement. 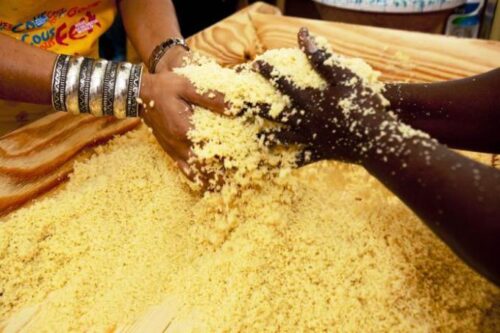 The grains of this food are obtained from wheat (or millet) roughly ground. The ground kernels are then sprinkled with flour and worked by hand by the women until they become like small seeds which are then passed through a sieve. The work demands much patience and time. Cous cous is always steamed in a special pot in which the lower part is used to cook vegetables and meat while the cous cous is placed in the upper part. The steam from the lower part passes through perforations and into the part with the cous cous. This food can be served in many different ways according to traditions. It may be cooked with meat or fish, vegetables or hard-boiled eggs. In Algeria, there is a version that is prepared with butter, sugar and raisins. It is this variety that allows it to be prepared in so many ways depending on the different territories while at the same time acting as a unifying culture over a vast area. 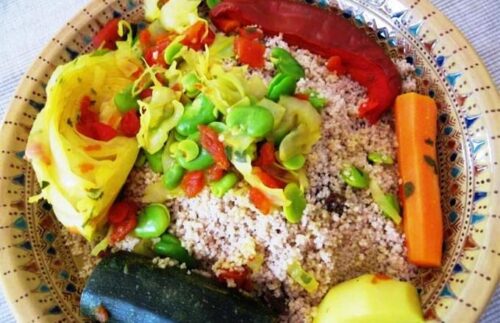 Cous cous is the dish consumed during feasts, gatherings, celebrations, weddings or funerals. Though it is not very nourishing, it represents a delicacy that evokes in those who have been accustomed to it from childhood, memories and reminiscences of family life. It is a dish that is shared, seated on the ground: the family or friends eat it from a single container, using a spoon or their hands.
The rule requires one to use three fingers of the right hand because, for Muslims, the devil eats with one finger, the prophet with two while five fingers indicate gluttony. Eating cous cous together is an act which cancels out conflicts and disagreements. 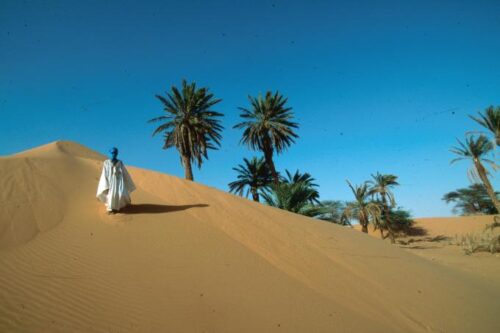 The books about food trace the popularity of cous cous to the Kuskusi of the 19th century but the cous cous we know today may well be much older and come from the 12th century (from the Berber seksou). It is certain that the Tunisian historian and sociologist Ibn Khaldun in the 16th century referred to cous cous as a symbol of the Berber culture.
In addition, the fame the dish acquired over the years is that of a ‘unifier’ among peoples.
Cous cous is praised differently in every country.  In Morocco, on 26 October of each year, the ‘World Cous Cous Day’ is observed; in Algeria, it is even part of the traditional school curriculum to study cous cous. Various cookery programmes on TV dwell upon the various recipes.
In Tunisia, cous cous workshops are held in the schools, while in Mauritania the state supports cooperatives that perpetuate the tradition of its preparation. 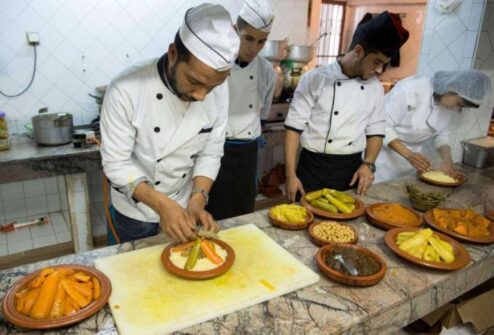 A Moroccan chef prepares a traditional couscous dish in a restaurant in the capital Rabat. (AFP)

Last December, UNESCO motivated the inclusion of cous cous as part of the intangible human patrimony ‘for the knowledge, know-how and practices relative to the production and consumption of cous cous’ that link together the four North African countries. In the case of cous cous, the techniques bring together the traditions of songs, gestures and oral traditions that accompany the preparation of the dish that is basically made from wheaten semolina, vegetables, meat or fish, and unites Berbers and Algerians, the cities and the countryside, the sweet and the salty, vegetarian or not, middle-class and working-class.
“Algeria cooks it in its own peculiar way while Morocco and Tunisia cook it differently”, the well-known Algerian chef remarks. “Even though I love my country deeply because I grew up there, there are no divisions, we are all equal and the cous cous is Maghrebi, something that belongs to us all”. Hicham Hazzoum, head of a famous Moroccan restaurant, the ‘Dar Naji’, like many chefs believes that cous cous should be recognised all over the world. Just like the pizza and other foods.
Rather than a dish, cous cous is a cultural patrimony that is culinary and made up of memories, traditions, knowledge, and gestures handed down from one generation to the next, with an infinite number of refinements.