They are at the traffic lights, juggling their torches and coloured balls and performing acrobatics. The street children have invented a new approach to raising funds by amusing the motorists.

It is evening and the traffic flows along the brightly lit street of Managua. At the traffic lights, children both large and small have exchanged the soapy water used to wash dirty windscreens for a display of acrobatics with machetes, knives, oranges, coloured balls and torches. The entertainment can be dangerous but earns some money to take home.
Close to the large Avenida Masaya, near the statue of Alexis Arguello, a former multiple world boxing champion, we met with Jose Roman.
He is the most famous among the street ‘acrobats’. His main act is juggling flaming torches.
He is slim, very short and wears dirty old clothes. The lights turn red and he goes to the middle of the road, deliberately dropping a torch and using his feet to pick it up and start his juggling act. Higher and higher go the torches and again he uses his feet as part of the cycle. 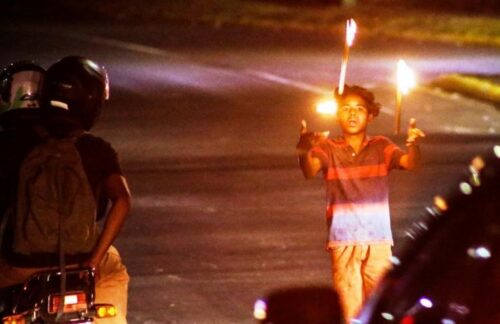 Jose Roman extinguishes the torches and approaches the cars with open hands. Those hands, blackened by the smoke of the torches, collect the royal sum of ten Cordobas.Asked how much he collects each evening he answers: “About 100 pesos” (3 Euro).
It is eight in the evening and he has been performing for two hours. The light turns red again and he sprays his torches with petrol, lights them and again performs his act.Jose Roman is only twelve and lives in the Jonathan González Quarter. Two other boys accompany him almost every evening he goes to his work. 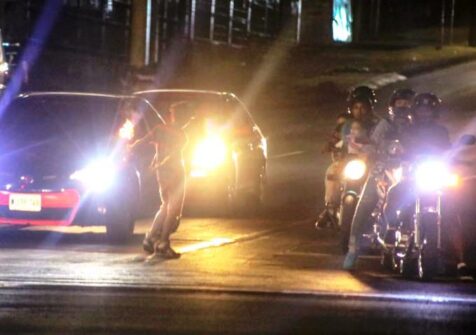 At the crossroads of Managua there are many children involved in the same sort of activity. They use their creativity and imagination to earn a little money. They all have one thing in common. Those boys and girls are always smiling, even when people shout at them.
Jose Roman has just finished another performance and collected another ten Cordobas. He tells us how he spends the money buying leftover food.“You don’t want to buy clothes or shoes?”, we ask him. “At present I am collecting money to buy my school uniform”, he replies. Another boy interrupts saying: “He is lying. He is not collecting money to buy food or a school uniform “.He shamefully admits this is true. He gives the money to his mother. “My mother doesn’t want me to do this but we need money at home. There are eight of us”. 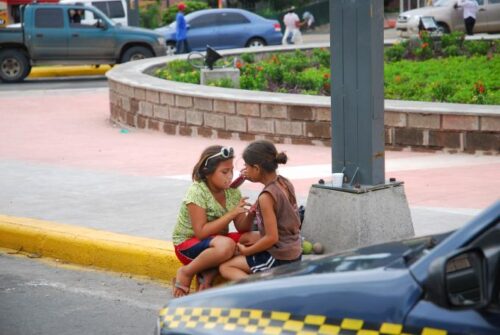 The light turns red again and at the end of the show I ask Jose Roman where he learned to juggle torches. “Two years ago, on the road, a boy taught me. It was not easy. I burned myself a lot.” Then he says: “My friend began to sniff glue (a mixture of cobbler’s glue and petrol) saying it made him feel strong. He got sick and died”.
Robin, a brother of Jose Roman, tries his hand with the torches. He is a year older. The other boy is called Steve. Each one has his own traffic light. Jose Roman and Robin live with their mother and an aunt. They have two sisters, one older and one younger. The mother has no work and the aunt has two small children. They all live in a small two-roomed house. Jose Roman’s father has some informal work but is a heavy drinker and hasn’t lived with them for years. 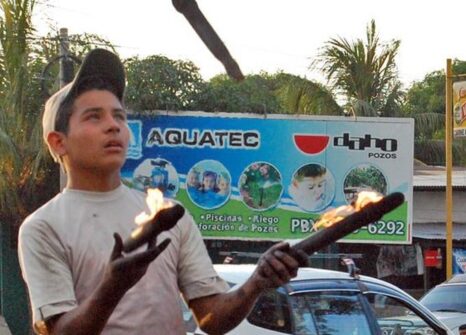 Jose Roman and Robin explain how they began washing windscreens and just begging for money. They soon realised there was too much competition and knew they had to do something different.
One day they saw that other boy performing at a traffic light and they knew they had to do the same.
The three children say nobody ever tried to persuade them to give up their activity, even though the government has a plan involving the street children. They feel they are lucky as they can go home afterwards. In the capital Managua alone, there are said to be 15,000 children from 7 to 15 years old who live on the streets.
It is nine o’clock and there are fewer cars now. Jose Roman tells us how he was once hit by a car but not injured. They have to be careful. Robin looks at the burns on his hands. Steve is counting the money to buy food to take home. The lights turn red once more but the three friends are on their way home after their day’s work.