The situation of Christians in Egypt is that of a varied minority. They do not always succeed in living as brothers and sisters. Nevertheless, the reality of encounter and fraternity is a real possibility. The monastery of Anaphora is a place that bears witness to this. A young Comboni Missionary tells us about it.

Christian Egyptians comprise about 10% of the 100 million inhabitants of the country.  They make up the numerically largest Christian presence in all of North Africa and the Middle East. Most of these Christians are Orthodox Copts belonging to the Church which is heir to the millennial monastic tradition of the desert and of the best-known theological school of the first centuries of the Christian era, the Alexandrian School.
Alexandria city was also the seat of one of the five patriarchates of the primitive Church. The head of the Coptic Orthodox Church is the Patriarch of Alexandria and successor in ministry to Saint Mark the Evangelist who, according to tradition, was the first patriarch
and evangeliser of Egypt. 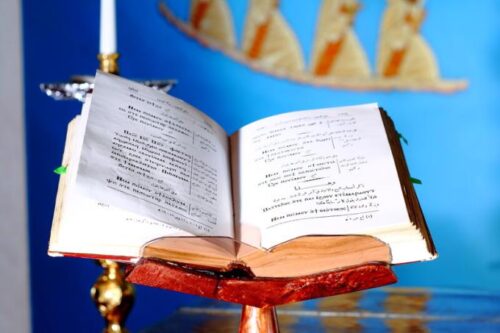 The Coptic Church is an Eastern Orthodox Church, one of the Churches that separated from the great Latin and Greek Church after the Council of Chalcedon (451).
As such, it is independent and separated both from the Catholic Church and the Greek Orthodox Church which is under the Patriarch of Constantinople. Alongside this Orthodox majority, there are also Egyptian Christians called Coptic Catholics who, while observing their Coptic rite, are in communion with the Church of Rome. There is also a growing number of Egyptians who belong to reformed denominations including Anglicans and various evangelical Churches.
Egypt has always been a place of encounter of peoples, cultures, and religions due to its history and its geographical location. In the course of the ages, groups of Greek, Turkish, Maltese, Lebanese, Armenian, Syrian, Italian, French, English, Sudanese, Eritrean and other nationalities moved into Egypt and settled there. These communities are to be found mostly in Cairo and Alexandria.
Many members of these groups are Christians of various denominations who, over the years, established places of worship and religious communities. Consequently, the Christian presence in Egypt today is made up of a large variety of nationalities, rites, and communities. 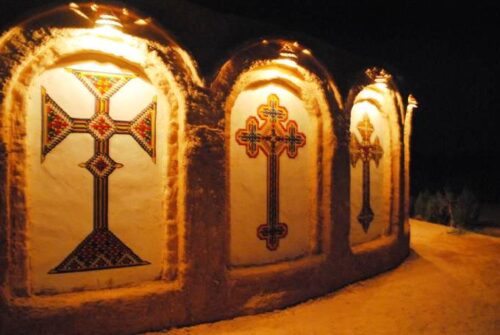 The different rites of the Catholic Church, the various Orthodox communities and the galaxies of reformed Churches live side-by-side on the banks of the Nile, their churches and places of worship often close together. Coexistence is not always easy. Belonging to a minority may, on the one hand, encourage valuing what is held in common, especially regarding daily life. On the other hand, this situation carries the risk of clinging to what one has, and living together of Churches and rites may lead to competition. For this reason, the acceptance of Christians of other denominations can never be taken for granted, especially as concerns the leadership of the communities. Fear, mistrust, new and old grudges come to the fore especially as regards the sacraments, the first of which is matrimony, and the formation and accompaniment of the youth. However, it was through an experience with the youth that I had the opportunity to come to know a place that is a symbol of openness and encounter: the Coptic Orthodox monastery of Anaphora situated about 75 km north of Cairo. 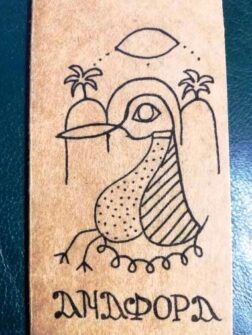 Anaphora is a Coptic word of Greek origin which means ‘offering’, derived from the verbs ‘to raise up, to carry’.

The monastery was founded towards the end of 1998 by Bishop Thomas, Orthodox Bishop of El-Quossia, in Upper Egypt. A charismatic personality with many years of monastic life, His Grace Bishop Thomas came into contact with some European places expert in ecumenism such as the French ecumenical monastery of Taizé. As pastor of a mostly rural diocese in southern Egypt with problems related to work, education, and co-existence between religions and different groups, he decided to found a monastery in an area to the north of Cairo where, for centuries, some Desert Fathers had lived. Besides providing work for some young people of the diocese, the monastery has 120 acres of land cultivated sustainably, with the goal of making the monastery of Anaphora self-sufficient. Right from the start, Bishop Thomas wanted Anaphora Monastery to be a place of encounter for all, especially Christians, regardless of their denomination.
The name of the monastery suggests its vision. Anaphora is a Coptic word of Greek origin which means ‘offering’, derived from the verbs ‘to raise up, to carry’. It is, therefore, a community that lives fully the vocation to build up and raise the spirits of those who visit it, a fruitful reality that wants to be a place of peace, serenity, simplicity, and welcoming for all, without setting limits to journeys, convictions or faith. 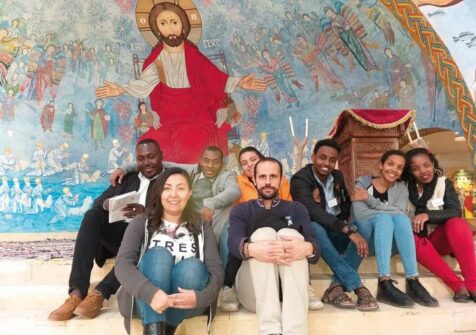 Father Giovanni Antonello with a group of young people visiting the monastery.

My first contact with Anaphora Monastery was in November 2018 when, together with a confrere and a Comboni Sister, we accompanied a group of young people from our parish in Cairo to take part in a three-day meeting organised by two monks from Taizé in collaboration with the Anaphora Centre. Those days were like a cool drink of water on a hot summer’s day. We were the only Catholic group among a large majority of Orthodox Christians and various groups of Protestants. Right from the start, we felt that we were meeting not so much as Catholics, Orthodox or Protestants but as brothers and sisters. With extraordinary simplicity, our differences were overcome as we prayed and reflected together, in listening to experiences of dialogue and service, in the simple sharing of meals and study seminars. During those days, we could breathe an atmosphere of fraternity, exchange, listening and reciprocal acceptance. 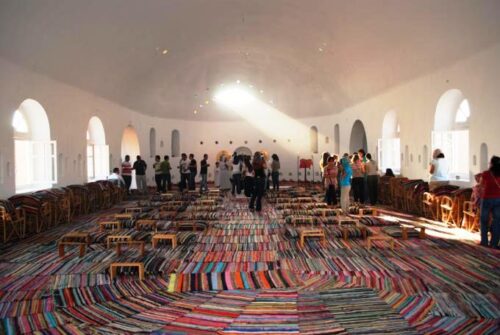 We immediately understood that what we were living was not exceptional but an integral part of the mission of the monastery. As well as meeting Orthodox monastic men and women and volunteers, we also met some members of European Protestant Churches who were having an experience of monastic life there with them. That visit gave rise to many more in the years that followed.
Today, I am reinterpreting my experience at Anaphora Monastery in the light of my experience as a Comboni Missionary living and working at Aswan, in Upper Egypt, involved in coming to understand better the challenges faced by these people and especially the Egyptian Christians.
I see the monastery experience in the light of the Covid-19 pandemic and Pope Francis’ Encyclical Fratelli Tutti, in which the challenge of fraternity strongly emerges. All of this makes me understand ever more how places and experiences like that of Anaphora Monastery are seeds of hope which Egypt and the whole of humanity desperately need.
In a world where the temptation to close oneself off from those who are different, or from all others no matter who they are, is forever growing, a world where building walls, whether material or mental, becomes a convenient and attractive solution, where personal or group individualism is in danger of becoming the rule, Anaphora Monastery reminds us that there are still people who are committed to building bridges and creating opportunities for encounter and dialogue; there are still people capable of seeing others as brothers and sisters despite their differences. Anaphora Monastery testifies to our ability to walk together in diversity. The dream of regenerated, reconciled humanity can only be built up by starting with the short steps we are capable of, in mutual acceptance and fraternity.