On the trail of men and women who dress luxuriously without being rich. Weekend dandies convinced they can stimulate emancipation and social criticism with their dress and posture. There is no shortage of proselytes.

“There are no schools to learn to be like me. But you can see a little boy soon manifest the character of a true sapeur. Where did you learn it? It is the spirit. The spirit that is in some special people”. Moutalaoua Emrick Uriel Bienvenue, aka ‘Derrick’, is a 35-year-old Congolese electronics technician with his wife and children. He is busy arranging dozens of ties, shirts and designer suits in a small studio apartment located in the Makélélé neighbourhood of Brazzaville, the capital of Congo.
“With these clothes I attract people’s attention, I awaken consciences by transmitting another possible identity and I leave a coloured trace to follow”, he explains, observing himself in the mirror while trying to match the jacket with a tie. 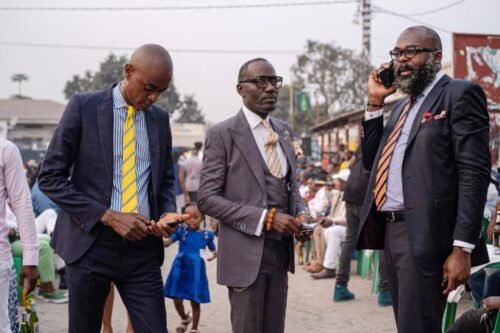 Derrick is a member of the Society of Animators and Elegant People (Sape), a movement whose adherents wear luxury clothing and accessories in an ostentatious, sophisticated and extravagant way, the African equivalent of 19th-century Oscar Wilde dandyism. It is no coincidence that the name ‘Sape’ refers to the informal French verb ‘se saper’ which means ‘knowing how to dress well’.
The sapeur and the sapeuse are to all intents and purposes ‘African dandies’ who profess the so-called religion ‘ya kitendi’ (the religion of the cloth), which aims to achieve absolute elegance and the search for new forms of style that inspire society.
The origins of the movement are uncertain. According to their accounts, the first sapeur were the so-called évolué of the early 1900s who returned to the colonies from periods spent in Europe dressed in Western clothes and for this they were admired and acclaimed as heroes of emancipation. But the Sape actually spread, becoming popular, in the 60s and 70s between Brazzaville and the Kinshasa front (in the Democratic Republic of Congo). 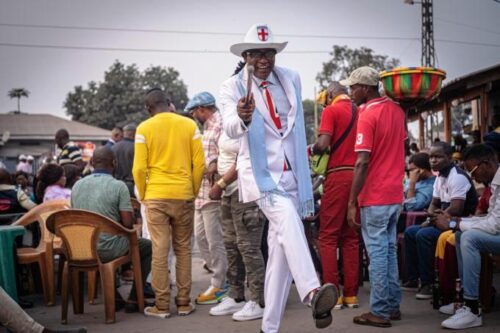 A social phenomenon that has become a form of rebellion against the Marxist anti-colonial austerity of the then People’s Republic of Congo and against the Mobutu regime in neighbouring Zaire, which banned Western clothing by imposing traditional clothing within the rigid ‘campaign for authenticity’ represented by the ‘abacost’ (clothing approved by the regime). Another important element of the movement is its link with the musical environment which has absorbed its style right from its beginnings. In the lyrics of the songs of stars like Papa Wemba or Emeneya Kester, references to Sape appear all the time. Over time, it has gained further weight in vast regions of Africa thanks to the spread of the Congolese rumba which last December was added to the UNESCO list of the intangible heritage of humanity.

Bacongo Quarter
Derrick’s stereo loudspeakers play the Bakwetu rumba piece from a live 1992 Wemba. After spraying himself with Paco Rabanne perfume, the sapeur carefully polishes a pair of elegant black shoes: “They are fabulous Damir Doma. I bought them on the web and had them brought directly from Paris through friends. If I tell my wife how much I paid for them, she will kill me”. 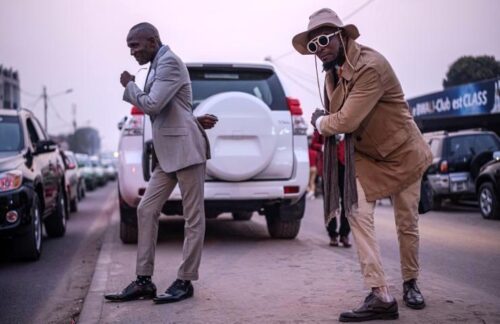 Sapeur spend a large part of their savings to buy clothes and accessories from the most important fashion houses in the world. In everyday life, they are ordinary people who also carry out humble jobs and live in popular neighbourhoods but make sacrifices that risk ruining themselves for the sole purpose of becoming a dandy and practising what is in effect a sort of cult. “There are ‘commandments’ to follow and initiation practices to be trained and introduced into the clans. Like historical Piccadilly where I grew up”, Derrick explains.
Many sapeur are also dressing advisors for those who want to buy elegant clothes and are invited to parties and weddings to give ‘blazon’ to the ceremonies. “With us, clothes take on a whole new dimension – continues the Congolese dandy – a sapeur never goes unnoticed. You understand it from his attitude, the way he smiles and the tension of his colours. It is the bearing that makes the difference”. 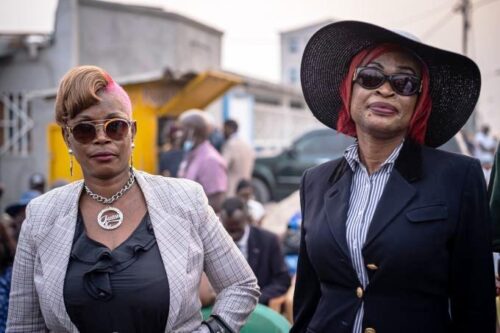 Every weekend, Brazzaville’s dandies gather in clubs in the historic Bacongo district where, in 1978, Christian Loubaki, who is said to have coined the name Sape, opened a clothing boutique called La Saperie. During the rallies, the dandies hold debates on styles and compete in the so-called combat d’esthètes (struggles between aesthetes) during which they parade with artificial and model-like movements, making themselves appreciated in bars and on the avenues by the so-called ngembo, young apprentice admirers.

Continental phenomenon
Sylvie Honorine Boudimbou, aka Nono de Paris, is a 46-year-old employee and has been a sapeuse for over twenty years. She came to pick up Derrick in an old Toyota. She is very elegant and wears sunglasses and a big straw hat: “First we shall go to Chez Uriel and then we go on to the Trocadéro; ok?”, she says, referring to the clubs while she drives excitedly through the green taxis of Brazzaville. Once there, she dives into a lively and colourful crowd of dandies surrounded by admirers and curious passers-by: “It’s always a big party and we are here to animate and communicate messages”, Nono points out. As a veteran, she wants to deepen the objectives and significance of the movement which still has many detractors: “Families and communities may not accept this lifestyle and others accuse us of denying our origins. In reality we make the most of the clothes made by Europeans by imposing our Black elegance“. 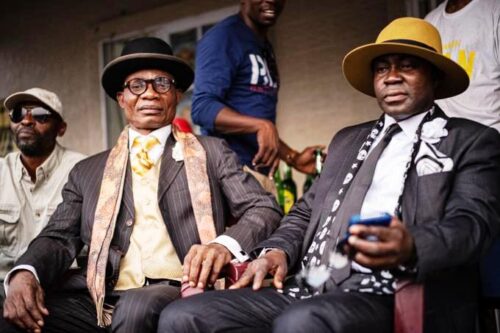 Sape is a socio-cultural phenomenon that originally may have been in part a way of detaching oneself from poverty and forgetting it by using a ‘denegrifying’ character quite the opposite to that of the enhancement of ‘négritude’. However, it has always stimulated social demands fed by generations of young Africans in search of points of reference and cultural identity. The number of followers today is growing and one comes across sapeur in other countries as well, from Senegal to South Africa. Thanks to music, Sape has also arrived among African Americans, where the watchword is increasingly ‘Black is beautiful’, and it has undergone a further boost. Testimony to this is the documentary Black Dandy, Une beauté politique by Ariel Wizman and Laurent Lunetta released in 2015, which retraces the stories of emerging designers who see black dandyism as a true declaration of identity independence.