Four African Sisters have restored life to a monastery founded in 1931 by a French Franciscan in the Berber village of Tazert.

We are in Tazert, a Berber village of 3,500 inhabitants sixty kilometres from Marrakech. “This is an oasis of peace for anyone who comes to visit”, says Sister Noellie Kabore, a Burkinabé nun at the head of the small Franciscan community which for two years has given new life to a place with a long history of Christian presence in Islamic lands. The monastery of the Visitation was founded in 1931 by Father Charles-André Poissonier, a French Franciscan fascinated by the experience of Charles de Foucauld, a hermit among the Tuareg who will be proclaimed a saint in May. The unique experience of faith and dialogue of Poissonier, who became known among the Berber communities as ‘the man with hands of light’ who helped the sick and the poor, was born from the fusion of the spirituality of the poor man of Assisi with that of the ‘universal brother’. He died of typhus in 1938 at the age of 40, having left the monastery to the Franciscans, who were replaced four decades later by a community of Melkite Poor Clares, who carried on the commitment of closeness and support to the people. 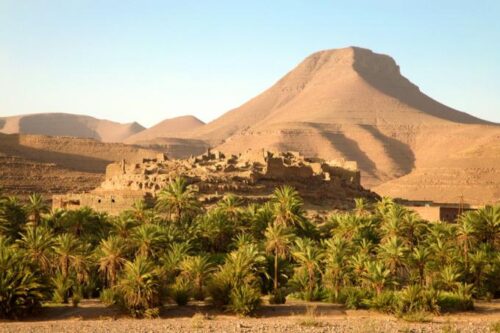 A traditional berber village high in the slopes of the Atlas Mountains. 123rf.com

In 2013, however, faced with the lack of new vocations to guarantee their presence, the nuns, now elderly and weak, left Tazert, explains Sister Noellie. The monastery, now owned by the diocese of Rabat, would have succumbed to the wear and tear of time if the Belgian foundation Coeur Maghrebin, committed to the development of the local community, had not taken steps to protect and restore it. Eventually, in late 2019, the Sisters of St. Francis of Assisi, a congregation whose motherhouse is located in Montpellier and which already had a presence in Mohammedia, responded to the appeal of Cardinal Cristobal Lopez Romero, Archbishop of Rabat, not far from Casablanca.
At the foot of the Atlas Mountains, in a rural and traditional context marked by material and educational poverty, a group of African women made their home, ready to revive what was to be both a place of prayer and interreligious dialogue, a contemplative reality but also a reception and spiritual retreat facility with a guesthouse of about twenty rooms. 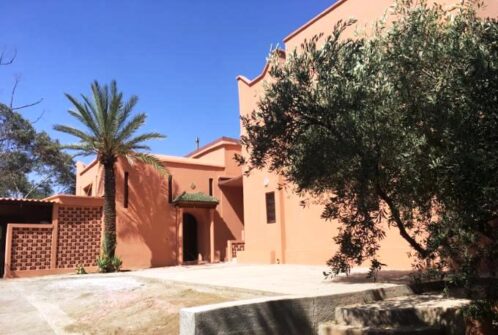 “Our doors are open to all”, confirms Sister Noellie, whose previous mission was in the Democratic Republic of Congo. “There are foreign pilgrims and tourists, religious and laypeople from Moroccan parishes, young people who come for retreats or periods of formation. Muslims from the area also come to visit us or just to look round”. The monastery, inspired by native architecture, is in fact a familiar presence for the people of Tazert especially since the nuns who live there certainly do not remain closed inside its clay walls. Sister Martine Ko, a thirty-year-old Togolese who is the youngest of the group (the ‘eldest’, the Burkinabè Sister Annie Bamogo, is only fifty years old), works at the village dispensary as a nurse. Sister Prisca Simtaya, also from Togo, works instead at the embroidery workshop created by the Coeur Maghrebin foundation to offer the 90% illiterate inhabitants opportunities for income and emancipation. “This is a reality which today involves almost a hundred women”, says Sister Prisca.
“In the workshop, they make hand-quilted linen sheets, tablecloths, tunics, which are then sold both in various shops in Marrakech and abroad, through solidarity channels that also promote the production of items at the customer’s request”. 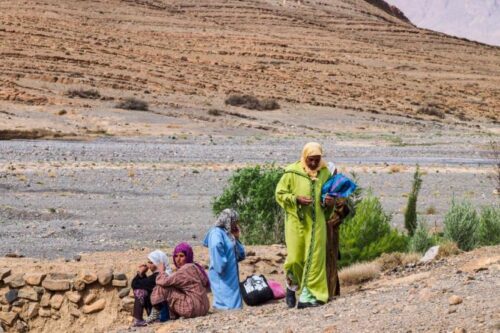 Berber people living in the moroccan mountains between Midelt and Erfoud. ©rudiernst/123RF.COM

In addition to training in traditional embroidery techniques, the workshop provides literacy and computer science courses. The craftwork, from which the entire village benefits, is also an opportunity to get together and form relationships between the nuns and the seamstresses. “As the women work, they chat, laugh and sing, while the children play on the patio. This is how friendship is born”. “We share the difficulties and aspirations of the people, who welcomed us with great affection when we arrived. People were really happy to see the monastery reopen! When we walk through the streets of Tazert there is always someone who greets us, who offers us a coffee”, says Sister Prisca.
In Morocco, the Catholic Church has about 30,000 faithful, 0.1% of the population, which is almost totally Muslim. Catholics are mainly Europeans and young people from sub-Saharan Africa, who come to study, and migrant workers. The faithful, in the two archdioceses of Rabat and Tangier, belong to 35 parishes and are assisted by 46 priests and various religious orders. Among the main areas of the Church’s commitment are education, social assistance and the promotion of dialogue between Muslims and Christians.