Bishops and priests threatened with death. Churches profaned. Nevertheless, the Church has become a sign of hope and
strength for many.

They broke down the door of the presbytery to get in, those six hooded and heavily armed men. They held Father Alfredo Garcia, parish priest of San Cristobal in Managua, at gunpoint while shouting at him to reveal where he had hidden the students.
Then they dragged Fr Alfredo into the church which, for some days, had become a hospital for those wounded in clashes with the police and paramilitaries. They threatened the people and frightened the wounded. “We will kill you all”, they shouted as they went away. 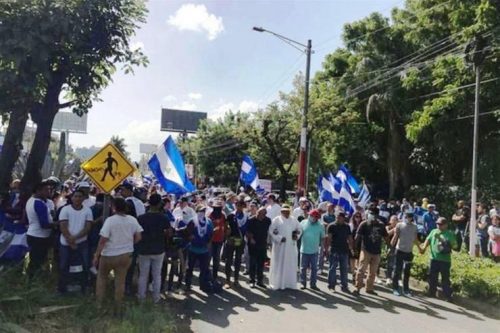 During the night, the bells of the church of San Juan Bautista in Masatepe had alerted the population to an imminent attack by paramilitaries. “To frighten us they shot volleys of machine-gun fire at the church and launched a mortar round.
Some paramilitaries came close and told us they would kill us if we continued to sound the bells”, said the parish priest, Fr Andres.
Fra Carlos Torres, a Franciscan, together with his companions and other priests of Juigalpa, tried to act as human shields between demonstrators and the anti-disturbance police. Any march whatever against the government was being met with bloody repression.
The white walls of the Divine Mercy church in Managua show the marks of bullets. Even the large image of the Merciful Jesus has been hit. For twelve hours, the parish in front of the National Autonomous University of Nicaragua (UNAN) was under fire from different directions by paramilitary groups, the so-called ‘Turbas’. It was they who, on 16 July last, attacked the athenaeum, occupied since May by students protesting against President Daniel Ortega. They waited for sunset to take the students by surprise. It was nothing less than a brutal blitz. The paramilitaries attacked with high calibre guns the students who sought cover behind the barricades. One of them died in the first attack. Another, seriously wounded, died a few hours later at Divine Mercy Church. More than a hundred took refuge there, fleeing from the volleys of the ‘Turbas’. Fathers Raúl Zamora and Erick Alvarado, who were at the parish, admitted them and improvised a field hospital to take care of the fourteen wounded. The paramilitaries, however, had not given up the hunt and began to fire on the church, wounding two more students.
Rosary in hand, some standing while others knelt, the students prayed, alternating the prayers with old revolutionary songs. They were rescued by the Papal Nuncio Mons. Waldemar Stanislaw Sommertag, and Cardinal Leopoldo Brenes, Archbishop of Managua. At dawn, after a night spent mediating, they both came to Divine Mercy Church with buses to take the students to safety. They were accompanied by UN representatives and members of the Inter-American Court for Human Rights. 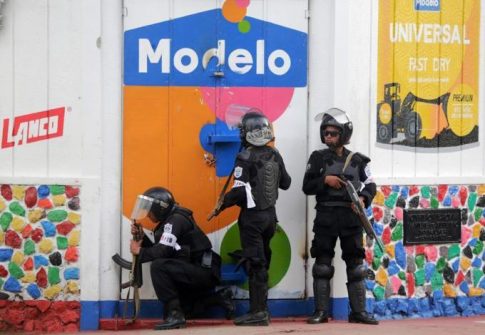 On countless occasions, the Church has to rush to rescue groups of demonstrators in the sights of agents and paramilitaries. The most famous episode took place at Masaya on 21 June, when the bishops formed a human shield for the demonstrators. On 9 July last, in Diriamba, the bishops were attacked by the ‘Turbas’ and beaten. ‘It was a cowardly attack’, declared Cardinal Brenes on Twitter. ‘The road of violence is a road with no exit. Problems must be resolved by reasoning and dialogue’, added Mons. Báez, wounded in the right arm during the attack, as was Fr Edwin Román, nicknamed the ‘Hero Parish Priest’. The latter, a grandchild of the Father of the nation, Augusto Sandino, defended with prophetic courage the inhabitants of Masaya. On account of his commitment he has received several death threats, just like Mons. Báez and many other prelates. 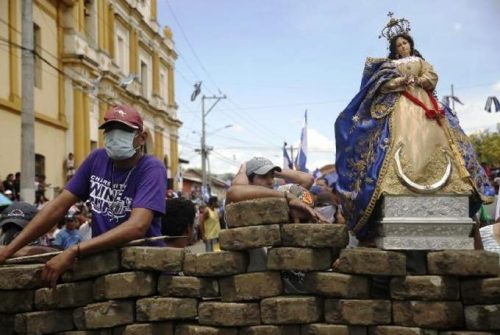 The protests which began in April, in opposition to a reform of social security that Ortega wanted to impose unilaterally, were immediately brutally suppressed by the forces of order and militant Sandinista groups. The iron fist endured by the population is seen as a total betrayal by 72 year-old Ortega, who in the seventies led the Sandinista revolution that overthrew the dictatorial regime of Anastasio Somoza. Now, the people say, he himself has become a dictator just like the one he overthrew.
According to the Organisation for Human Rights in Nicaragua, in the last four months there have been 440 deaths, more than 2,000 wounded, 280 disappeared and 500 people arrested.

The target is Mons. Baez

President Ortega of Nicaragua says he does not want him in the Commission for Dialogue which, for some months now, mediated by the Catholic Church, civil society, the business sector, the unions and the student movement, have been meeting with a government delegation to find a solution to the crisis. 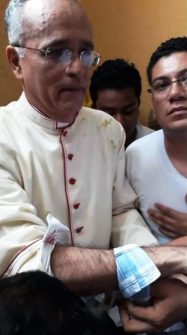 Early in August, the foreign minister of Nicaragua, Denis Moncada, went to the Vatican to seek the removal of Mons. Baez, Auxiliary Bishop of Managua.
“I know personally that the Pope is very well informed about what is happening in Nicaragua. I have had the opportunity to speak with him on two occasions. The bishops at this time have the complete support of the Pope”, Mons. states confidently.
Mons. Silvio José Báez creates trouble for the regime. On several occasions he used the social media to criticise the government. President Ortega and his Vice-President wife Rosario Murillo know very well that Mons. Báez is listened to by the people. He is from Masaya, the city that sparked the rising of July 1979 that put an end to the Somoza dynasty. He is a Carmelite religious. 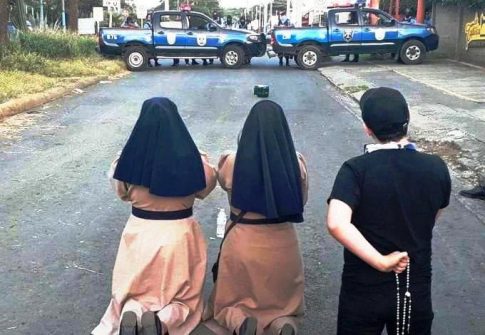 He calmly states: “I have always believed that this society (of Nicaragua) would rise up due to the structural, social, political and economic problems. The youth have awakened the whole of society when they became aware that Nicaragua could be different and better”. In the view of Mons. Báez, what is happening in the country is “an opportunity to show the true face of the Church that many do not know and that the religious have never been able to show”.
However, this time the Church has troubled the Ortega regime which has accused it of encouraging a coup. “In a society where what prevails is authoritarianism, the desire for wealth and power, deceit and violence, it is only logical that whatever is the opposite of these anti-values will be troublesome”, Mons. Báez affirms.
The bishop again goes on the attack, accusing the Ortega-Murillo government of manipulating the explicitly religious dimension of the Church, its language, images and its patronal feasts but “the Church is not only this, it is also solidarity, service, being close to those who suffer and to the victims” he explains. He is no longer surprised at what is happening and the accusations against him. “When power is corrupt and is no longer a power at the service of the majority, this face of the Church will obviously be troublesome and so we are subject to scorn, threats, calumnies and persecution”. 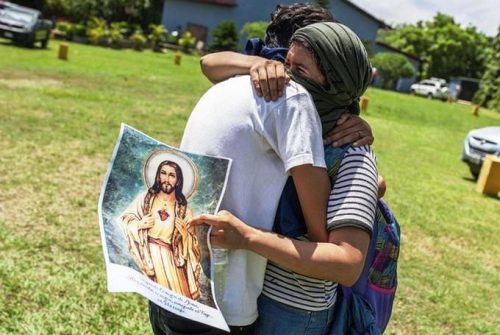 A dramatic photo that went viral on the social media shows him alongside Nicaraguan Cardinal Leopoldo Brenes as they pass, heads held high, between two furious Sandinistas who insult them to their faces. At that moment, Bishop Baez says he asked himself, “how is it possible that there are people so full of hatred and capable of such violence and madness?” He had gone to Diriamba, a municipality forty kilometres from Managua, surrounded by Ortega’s paramilitaries, to free a group of paramedics and Franciscan missionaries who had taken refuge in the Basilica. “I am saddened to see the Nicaraguan people in such an aggressive attitude; we Nicaraguans are not like that. Our people are happy, industrious, peaceful and honest and I endure this situation with great pain”, he states. 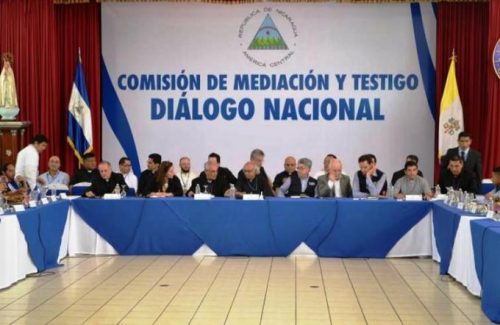 Speaking of politics, Mons. Báez explains: “As Christians we are called to do our part not only in our personal, family and professional life but also within the economic system, in our political options, in building up society and exercising our rights and duties, seeking the common good”.
The government accuses him of engaging in politics. “There is politics in the strict sense which is that of party politics whose aim is to gain power to exercise it in society. But politics in the broad sense is that which all citizens must practice and in which we are all involved. It is the politics of citizenship, of rights, of the search for the common good and respect for human rights”, he added. “It is the politics that concerns the freedom of others and the exercise of my liberty with love; in other words, it is politics understood as the principle that guides a social group living together”. And again: “The political dimension of the faith is indispensable. Christians are not complete if their faith does not involve them in the social and political dimension”. (C.C.)