Last November, Pope Francis made mons. Cornelius Sim apostolic vicar of Brunei, a cardinal. “For me, it was a bit of a shock and unexpected”, said mons. Sim. “I think this appointment’s significance is not so much about the person but the people and region that he represents. Because the Pope is trying to reach out to the Church in the periphery. When you talk about Brunei, the Church is ‘the periphery within the periphery’. I find it very significant that Pope Francis is taking this approach”.
In Sim’s view, the Pope understands that the Church exists “in those little places where there is not much publicity” but where the faith is alive. 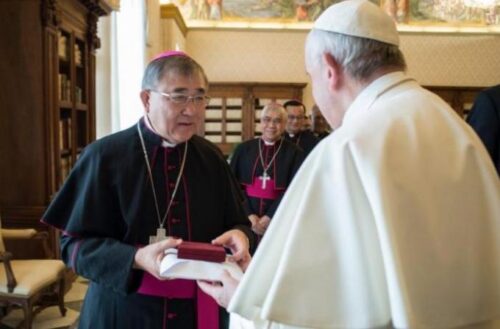 The Catholic Church has had a presence in Brunei for more than 90 years. Its three Catholic schools are especially an area of contribution, and 60 percent to 70 percent of their students are Muslim.
Cardinal Sim and his three priests serve the roughly 20,000 Catholics who live in Brunei. Catholics can freely practice their faith within the church compounds and at home, but public displays of the faith are restricted. A majority of this small Catholic population, about 70 percent, are migrant workers from the Philippines. Another 20 percent are migrants from other countries such as Indonesia, India, and Malaysia. The remaining 10 percent are indigenous Bruneians.
According to Cardinal Sim, the Catholic Church in Brunei must work to “provide a home away from home” for its large immigrant community. It supports these migrants in times of illness or death and provides financial aid and food programs.
He pointed out: “We have seven priorities that we walk by since we established our vicariate. These are Bible literacy, adult faith formation, youth, promotion of vocations, witnessing to Christ, social welfare for people, especially migrants, and focus on family. These are the seven priorities we try to walk with. It is really about building a strong Christian community around these principles”. 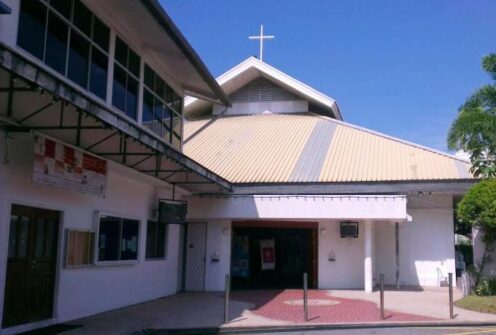 Our Lady of the Assumption Church in Bandar Seri Begawan.

He stressed: “The whole idea is that the Church is about relationships. It is about liturgy, but it is also about relationships. First of all, relationships within the family, then with one another in the parish. From there, we also look for enriching our relationship with our community outside the parish, in the places we work, where we share lives with everyone else. That is mainly our thrust”.
“For Catholic natives, the Church must build their faith to help them be ‘more conscious and more willing to be engaged’ in supporting the Church”. “Young Catholics, Sim said, draw their views from their counterparts in their ‘own world’ of social media and their relationship with authority is different from that of previous generations”.
For Sim, the Church cannot simply be a subculture: “as a Church we are not one little group of people, all isolated on our own in our little bubble”.Rather, the Church cuts across boundaries of race, colour, social status, or migrant status because “all of us are children, sons and daughters of Jesus Christ”, he said, adding “you cannot have God as your Father unless you have the Church as your Mother”. 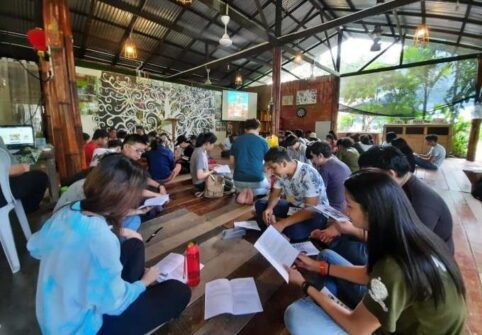 The Sultan has made Islam a state religion.  Cardinal Sim explains: “As the country leader, the Sultan is committed to making Islam the national religion, which is part of the constitution. But the constitution also states right at the beginning: ‘The religion of Brunei Darussalam shall be the Muslim religion according to the Shafeite sect of that religion. Provided that all other religions may be practiced in peace and harmony by the person professing them in any part of Brunei Darussalam’. The Church is also constitutionally accepted as a religion in Brunei. So, I think the situation in Brunei is unique. There were many controversies, mostly outside Brunei, when Sharia law was included here (in 2014). But we, including Catholics, have lived with Sharia in an uncodified form for many decades. But only later it was codified and formally accepted.
But in practice, these laws were there. Now, they are implemented in a wise and very refined manner. It is not implemented haphazardly or with any malicious intention”. 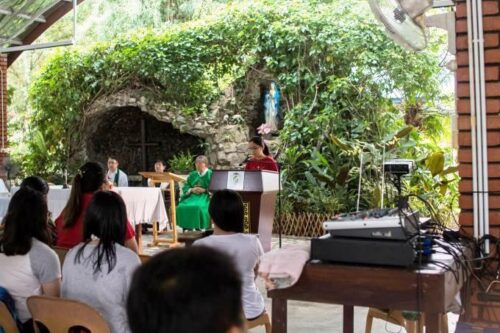 The Cardinal said: “If anyone wants to talk about Brunei intelligently, he should live here or be part of the people here. People generally are looking for a common good. That is what we are invested in, whether in our schools, in our churches, and that’s the way we interact with people. If there is an issue, we always consult, dialogue and engage in conversation. That’s is the way we do things here”.
Cardinal Sim, 69, was born in Seria, Brunei, and is of Chinese and Dusunic descent. An engineering graduate from Scotland, he worked in Brunei for seven years before starting his priestly studies. When ordained in 1989, he was Brunei’s second local priest. He was named vicar general of Brunei in 1995 and two years later, Prefect of the Apostolic Prefecture of Brunei. In 2004, Pope John Paul II appointed him Vicar Apostolic of Brunei, and he received episcopal consecration in 2005. Bishop Sim, is the first cardinal from Borneo Island and will have the voting right to elect a pope until 2031.