Interreligious dialogue is customary. Just like the comparison between the different ethnic components, also through institutional paths. Thus, the Ghanaians live together without distinction
of faith or ethnicity.

If there is a priceless treasure that the Ghanaians have always clung to, valuing and cultivating it, it is the peaceful coexistence between the different religions and ethnic groups that make up the country. Coexistence, not just tolerance. That is to say a way of living together and growing in the community that does not presuppose differences, recriminations or grudges. Of course, as can happen even in a large family where everyone has the same rights, but one member wants to prevail over others, even among the Ghanaian population there are – and always have been – stronger groups (on a socio-political level) that exhibit a certain ‘natural’ propensity towards pride (not to say a sense of superiority). But this has never resulted in extreme behaviour or insurmountable divisions. 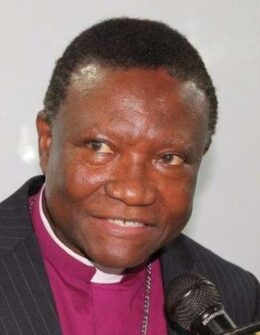 This treasure is therefore constantly polished to prevent it from losing its value and lustre. At the end of last May, the Catholic Bishops’ Conference of Ghana and the National Imam Office organized the first official event on interreligious dialogue. The purpose of the initiative is to institutionalize the process of interreligious dialogue and respect for the diversity of faith. Such modalities of dialogue and respect have been applied for decades. An attitude that the various governments have pursued both with an inclusive school system, by promoting exchanges and meetings, and at a political level.

National Peace Council
For example, it is an unwritten rule to guarantee the institutional presence of both a Christian and a Muslim leader. And so, if a president is Christian, his deputy will be Muslim and vice versa. The same principle of respect and mutuality sees Christian leaders – often the president himself – participate in the great religious events of Islam and, of course, also, in this case, the principle of reciprocity applies. All ‘institutional’ acts, whose purpose is to preserve the freedom of religion.
Very clear signals to a population ‘educated’ to live together without distinction of faith or ethnicity. 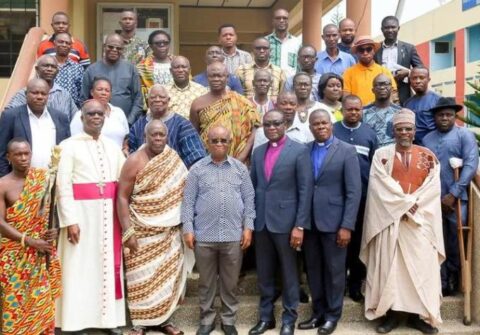 It is no coincidence that Ghana boasts an institution – established by a parliamentary act – with a clear name: The National Peace Council, an independent body, despite the fact that its 13 members are appointed by the president in office, whose goal is to prevent any conflict by fostering inclusion and collaboration. The strength of the Council is its composition which takes into account the various representations and the fact that it is also structured at the regional and local levels. In short, it is due to constant social and institutional work that the tensions that have been growing in the Sahel and neighbouring countries have not so far affected Ghanaian society.
According to the latest available data, about 71% of the population is Christian, 18% Muslim. The remaining 11% is made up of adherents to religions such as Buddhism, Hinduism, Judaism, Rastafarianism, and of course traditional African religions. 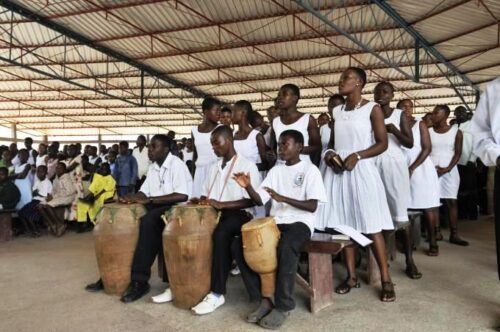 However, a distinction must be made concerning these official percentages. Although freedom of faith is established by the Constitution and claimed as an essential element of civil coexistence, often the populations with a majority religion do not look favourably on the persistence in the country of beliefs or spiritualities linked to traditions. This is, at least apparently, because it happens that, in a more or less hidden way, many of those who adhere to Christian Churches also follow traditional rites. These ‘fusions’, this syncretism does not really surprise anyone and are well known. Returning to the official Christian religion, it includes the Catholic, Methodist, Anglican, Evangelical, Adventist, Pentecostal, and Baptist Churches. Let us not forget that Ghana is a former English colony that has preserved links with the British state religion. Not to mention the influences of the Christian Evangelical Churches from the United States.

The role of traditional leaders
Another interesting aspect that makes Ghana a peaceful country and substantially alien to inter-ethnic clashes is the consolidated habit of marriages between people of different ethnic groups with Ashanti who marry Fanti, Ga who marry Ewe, Dagbon who marry Gurma and so on.
On the other hand, it is easier for religious faith to be associated with the place of birth. The regions to the north of the country and also the urban centres have a Muslim majority: Accra, Kumasi and Sekondi-Takoradi. And if there have been clashes in the past, they were not so much questions in the religious or ethnic spheres but issues of land ownership. Everyone still remembers the Konkomba-Nanba conflict (known as the Guinea Fowl war), which broke out in northern Ghana in 1994 and lasted for decades. The Konkomba, Nawuri, Nchumuru and Basare fought against the Nanba, Dagomba and Gonja. At the root of this conflict, there were claims to land ownership. It is not known how many were killed, perhaps 2,000 people, and many more left those areas. 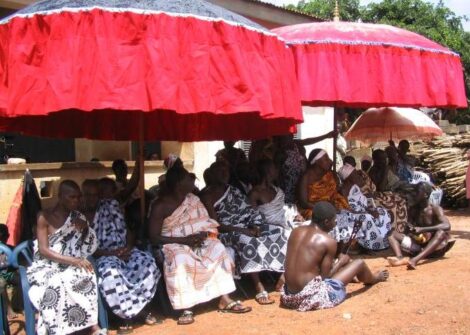 The tribal ‘chieftains’ also play a key role in maintaining peace in the country. A type of local administration and a social control device whose positive fruits are most evident when the leaders are upright and authoritative personalities. A note from Global Security highlights that out of a hundred disputes of an ethnic nature or claiming the role of leader, 70% occurred in the northern regions of the country, the savannah regions, the poorest and most arid. Where, at the first opportunity, people flee and go to seek better living conditions in the cities. It is worth noting that a department by no means secondary to the Ghanaian government is that of Chieftaincy and Religious Affairs. A mandate that acts as an interface between government, religious institutions, and civil society to guarantee peace among the population and prevent disagreements and tensions.