This plant has been used in various parts of Africa in folk medicine to treat a diversity of ailments including skin complaints, cuts, burns, pneumonia, sleeping sickness, and stomachache. The juice of the fresh plant or an extract of the dried plant is used in the treatment of allergic rhinitis and sinusitis.

Ageratum conyzoides (Family Asteraceae) is an erect, branching, soft, slightly aromatic, annual herb with shallow fibrous roots. The plant has a goat-like smell and hence the common name ‘goat weed’. The genus name Ageratum is derived from the Greek words ‘a geras’, meaning non-aging, referring to the longevity of the whole plant. Ageratum conyzoides is a tropical plant that is widely distributed in Sub-Saharan Africa. It grows to approximately 1 m in height. The stems and the leaves are 2-6 cm long, egg-shaped and covered with fine white hairs. The flowers are purple, blue, pinkish, or white, less than 6 mm across, with an average of 40 florets arranged in close terminal inflorescences. The fruits are small, brown, one-seeded achenes and can be easily dispersed. The fruits contain seeds that are photoblastic in nature. 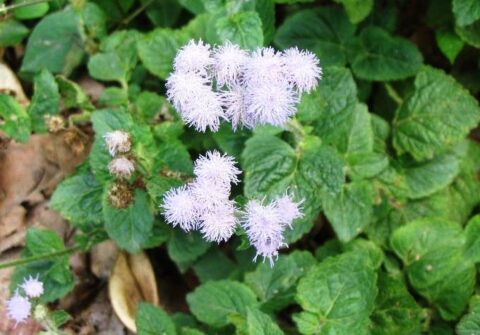 Ageratum conyzoides has been used in various parts of Africa, in folk medicine, to treat a diversity of ailments including skin complaints, cuts, burns, pneumonia, sleeping sickness, stomachache, fever, malaria, coughs, colds, a painkiller during childbirth, and to treat snakebites. In some communities, the plant has been indicated for the treatment of mental and infectious diseases as well as headaches and dyspnea.
Ageratum conyzoides is also reported to be used as a purgative, febrifuge, for ophthalmia, colic, and treatment of ulcers. In West Africa, the plant is used as a local remedy for craw-craw conditions. In addition to its popular use for treatment of skin diseases, a decoction of the plant is taken internally to treat diarrhea and to relieve pain associated with the navel in children. In Central Africa, Ageratum conyzoides plant is used to particularly treat wounds caused by burns, while in East Africa it is used in traditional medicine as antiasthmatic, antispasmodic, and is well-known to possess haemostatic effects.
The goat-weed has been used traditionally to relieve constipation and fever, and applied as a dressing agent as well as an antiulcer agent. This herb is used to treat measles and snake bite. In Nigeria, Ageratum conyzoides is used for skin diseases, wound healing, diarrhea, common colds, headaches, boils, eczema, and even used to treat HIV/AIDS. The juice of the fresh plant, or an extract of the dried plant is used in the treatment of allergic rhinitis and sinusitis. The juice of the fresh plant is also useful in treating post-partum uterine hemorrhage. 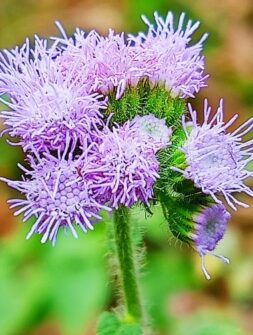 An infusion of Ageratum conyzoides leaves, or the entire plant, can be administered for the treatment and management of spasms, and as a tonic. Ageratum conyzoides leaves are also used in folk medicine as anti-itch, treatment of rheumatism and sleeping sickness, mouthwash for toothache, antitussive, and as a vermifuge. The leaf of the plant is also known to be used for the treatment of leprosy and as an oil lotion for purulent ophthalmia. In some communities, tea made from the leaves of Ageratum conyzoides can be used as analgesic, anti-diarrheic and anti-inflammatory. Ageratum conyzoides is widely used by many traditional medicine practitioners against dysentery. The leaves, when crushed in water, are given as an emetic and also applied intravaginally for uterine troubles. They are used in the treatment of pneumonia by rubbing them on the chest of the patient. The leaves are consumed as vegetables and also used to prevent tetanus. It is also used in the treatment of pneumonia, antitoxin of snake venom, typhoid fever, malaria fever, sore throat, and candidiasis. The leaves are styptic. They are dried and applied as a powder to cuts, sores, and the ruptures caused by leprosy; the powder absorbs the moisture caused by the disease and forms a layer that is removed after 1-2 days. The leaves are also used externally in the treatment of ague (severe fever). A paste of the leaves is used as a poultice to remove thorns from the skin. A paste made of the leaves mixed with equal amounts of Bidens pilosa, Drymaria cordata, Galinsoga parviflora and the rhizome of Zingiber officinale is used to treat snakebites. 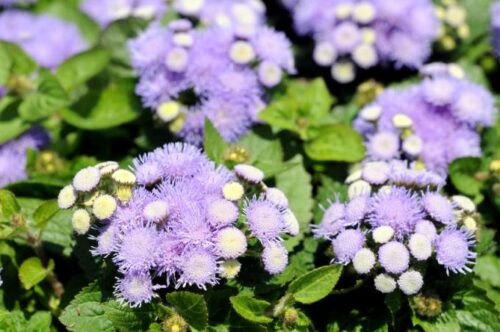 The roots are used in the treatment of tumours, lithiasis, and diarrhea in a baby. The juice of the root is antilithic. A paste of the root, mixed with the bark of Schinus wallichii is applied to set dislocated bones.
The flower is used to relieve itching, insomnia, cough, vermifuge, tonics, and antibug parasite. The juice of the flower heads is used externally to treat scabies whilst a paste of them is used to treat rheumatism. A tea made from the flower heads mixed with Ocimum tenuifolium is used to treat coughs and colds.
The medicinal activities of Ageratum conyzoides may be attributed to the phytochemical compounds contained in it, including terpenoid, sterol, flavonoid, chromene, pyrrolizidine alkaloid, coumarin, pyrrolon, and lignan. Apart from its use as human medicine for treatment of a wide range of diseases, Ageratum conyzoides is used to make soaps for topical applications on ulcers, lesions, and skin infections. A decoction of the fresh plant is used as a hair wash, leaving the hair soft, fragrant and dandruff free. Ageratum conyzoides is used as a cure for trachoma in cattle, an insecticide, and as a nematicide. Although cited as poisonous, it is also used as fodder for cattle, guinea-pigs, horses, and goats. (Open Photo: 123rf.com)