The textiles of the Andean Valley stand out not only for the technical complexity of the weaving process or for the beauty of their colours and figures, but also because their artistic symbolism reveals the socio-political, cultural, economic and spiritual worldview of the Andean people.

Once the wool is obtained from the sheep, alpaca, vicuña or other animals, it is washed in the nearest rivers to the communities; when it is clean, it is left to dry. When the wool is dry, lint and small dirt remains are removed by using sticks.
Then the wool is spun on a spinning wheel. The spun yarn is then wrapped in junis: balls of crossed and intertwined large loops. Once it is coloured, the yarn is left to dry and then it is twisted and spun again on a spinning wheel until the final fabric ball is obtained.

Natural ingredients for colouring the thread
According to ancient narrations, people once used natural elements to colour the wool threads. The brown colour was extracted from the corncob, which is the central core of an ear of corn. It is the part of the ear on which the kernels grow. The corncob was boiled in a container with plenty of water until it turned brown, then the juñis were immersed in the brown water to which salt and lemon were added in order to fix the colour and avoid dye bleeding. 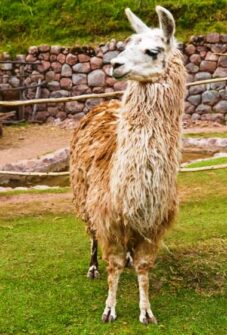 Close up of an alpaca.

The maiz morado (purple corn) or kulli sara is an ancient variety of corn originating in the Andes of Peru. In order to obtain the purple colour the corn was left to soak in water, then it was boiled until the water turned purple.
Threads were immersed in it until they absorbed the colour.
The cochineal, which can be found in the prickles of tuna, was used to produce red tints. Cochineals were crushed until their juice was extracted and then it was boiled in a container.The colour green was obtained from Kimsa k’uchu, the Ch’akatea Kimsa k’uchu and ch’akatea, which are green plants.
The leaves of these plants were left to boil in water for an hour until the green colour was obtained.
Lemon and salt were added to the water to get a vivid colour and then threads were immersed into the green coloured liquid.
The Ajrawayu is a hard plant with many thorns. It was used to make the yellow colour.Several different fabrics are produced in the Andean Valleys: utensil fabrics are used to make items for everyday use such as: aguayos, the inkuñas, the phullus, the sacks, the chuspas, the wayaqas and others, while clothing fabrics are used to produce clothing items such as the aymilla, the rebozo, the ajzu, the calzuna, the chumpi, the jacket, the pantipata, the poncho, scarves and others.
In all fabrics ancient and modern figures are represented with different colour combinations.

Meaning of the figures in the fabrics
Andean artisan fabrics show different patterns and figures, and each figure has a particular meaning depending on the ayllu (political, social, economic, and administrative unit of the Andes) where they are made.
The chuwa pattern  symbolizes a concave plate of common use, which is used to serve food. Another common motif in the Andean fabrics is the condor, a sacred animal to Andean peoples.
The condor is seen as the protector of the indigenous people and the messenger between Janaj Pacha and  Kay Pacha (the divine world and the human world). Birds among Andean people are considered as messengers of a future event, the arrival or the death of a relative for instance, or of the arrival of rain, etc. 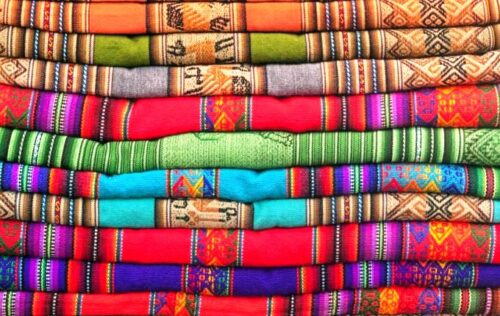 Other typical figures and motifs in the Andean fabrics are flowers, which symbolize love and friendship between two young people. Once, when young people fell in love, they romantically showed the loved one a flower as a symbol of their love. Sun is another motif. It symbolizes the light and source of energy for humans, plants and animals.
While ants in the textiles of the Andean Valleys, are the symbol of perseverance and bravery, they live in and work for the community like the Andean elderly used to do. Another typical figure of the Andean fabrics is the llama, the important transport animal living in the Andes Mountains, which provides people with wool, food, and a way to transport goods. Llamas’ foetuses were also used in ancient times as offerings for wilanchas (animal sacrifices).
Another common pattern in the textiles of the Andes are the leaves of the molle tree which symbolizes resistance.
The molle is an evergreen tree which has medical properties and which offers food and home to birds.

Meaning of the colours in the fabrics
Colours are also extremely meaningful in the Andean fabrics: the red aguayo symbolizes the blood spilled from the sacrifice of animals to Pachamama (the Andean earth-mother figure). Pachamama is the highest divinity of the Andean people since she is concerned with fertility, plenty, the feminine, generosity and ripening crops, besides providing protection. But red is also the festive colour, red aguayos, in fact, are used for special places and events such as uywañak ‘aku or to cover the table, during the ch’allaku (offering to the pachamama).
The red aguayo is also worn by the indigenous authorities, such as the tata jilamp, the tata segundo and the mama ralla and on the occasion of wedding ceremonies, since the red colour symbolizes the love between a newly married couple. 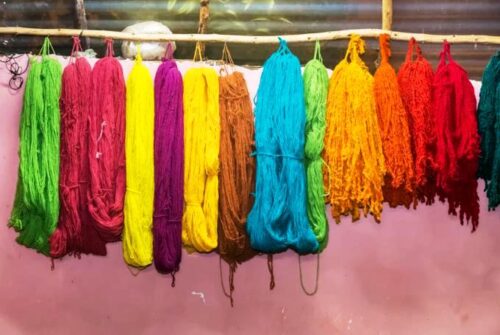 The aguayo in the green colour, which symbolizes hope and the blessing of nature, is mainly used for the ch’allaku ritual for the khuyuris on occasion of San Bartolomé and San Juan patron saints’ festivals.
The aguayo in the black colour, which symbolizes darkness, mystery, and death is generally used on the occasion of sad events. Traditionally it was known as the clothing of mourning for the loss of a loved one.
The Andean-Amazonian fabrics were and continue to be a sort of parchments that reflect the cultural and spiritual wisdoms of the Andean people through symbolism, yet another way of dialoguing
with the Pacha.