Born in the Caliphate and indoctrinated to believe
in a ‘different world’.

The images are few and taken from a distance. They show boys from 9 to 15 years old with Kalashnikovs in their hands, shooting as they run. They throw themselves to the ground and immediately rise again, shooting all the time. Behind them, an officer of the Islamic State shouts the command to advance and not to be afraid. The guns are heavy and are hard to carry. These are the puppies of IS. The term is used in ISIS propaganda:  the males are called puppies and the girls are called ‘the flowers and pearls of the Caliphate’. 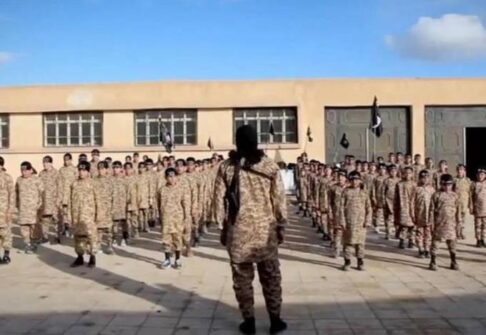 They may be married at the age of nine and have the task of building up the community of believers by giving birth to men and sending them to war. UNICEF estimates that they number between 700 and 1,000 children who were born in the surrounding areas of Syria and Iraq and therefore come under the Caliphate of Daesh. However, it is obvious that this estimate is only approximate since it does not take into account the local families. There are three important differences between the child soldier of Sub-Saharan Africa and the puppies of the IS: recruiting, schooling and religion. In Africa, child soldiers are recruited by force by armed groups but the Jihadists never recruit by force. In 90% of the cases, this comes about at the desire of the parents, many of whom are themselves Jihadists. 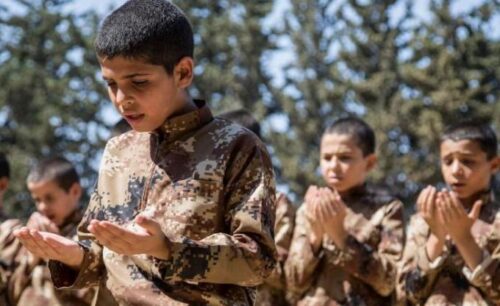 Once recruited by force, the African children never again go to school. They are trained to shoot, carry ammunition and carry out military tasks. ISIS instead opens the schools: the child Jihadists go to school and have textbooks in which the subjects studied are all filtered through fundamentalist eyes.  There is a process of strict indoctrination. The ISIS schools use more than forty different textbooks. Then there is the matter of religion: the child soldiers in Africa undergo brainwashing using some deformed and extreme religious input that is gathered randomly from different religions to which the children belong. In the case of ISIS, everything is based upon the theological, social, juridical and moral study of Islam. In the evenings, before going to bed, the mothers tell the children stories of Islamic martyrs. In the schools, such subjects as music, design and philosophy have made way for exclusively religious subjects such as memorising the Koran, elements of theology and Islamic law. History is restricted to Islamic history; physical education is transformed into ‘Jihadist training’ and includes lessons in shooting, swimming and hand-to-hand combat.

The duties of the puppies
The IS puppies have five tasks based upon the personal characteristics acquired during training. The spy group is a sort of preparatory grade for all before they are called to become specialised in a sector. The families and friends look on and have the duty to report those who do not respect the IS rules. Those who show communicative skills are engaged as preachers to spread the ideology of Islamic State and enrol future combatants.  The third level is that of the soldiers who are deployed on the front and also as guards at the headquarters. Then, there are the ‘executioners’ who carry out executions; in this way, acts of atrocity are normalised and power over the children is increased. 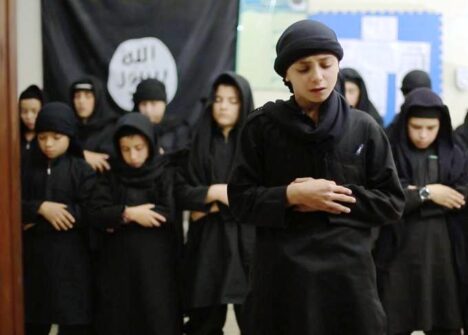 They are taught that to be an executioner who kills people by decapitation or by cutting their throats is a privilege and an honour. The highest level is occupied by those called ‘suicides’ who are used in martyr operations. The children are used for this as they usually are less afraid than adults: blindly and loyally, they volunteer for martyrdom, strong in the ideology of those who trained them. Those chosen for this role firmly believe that death on a suicide mission is the greatest of honours. Today, a fourth and new level of Jihadism has been reached, a dimension that involves not only mediated content but really builds up a ‘different’ vision which, by opposing reality, prevents any understanding of it. This is the background against which the phenomenon of child Jihadism moves.

A parallel world
Even though it has been defeated territorially, ISIS has inculcated into its adepts a representation of reality that is so invasive that it continues to survive in the parallel world in which they have been indoctrinated.  Nourished by the milk of extremism and having grown up in training camps, the children have been formed in such a way as to leave them dehumanised. The work of ‘de–radicalization’ is difficult since the seed of the Caliphate has been sown in their minds and their world is permeated by a Jihadist view that makes them tend completely
towards Jihadism. 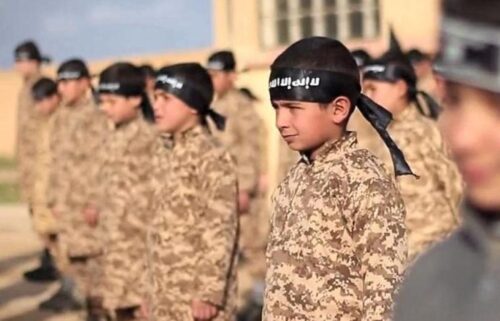 Where do they live after Daesh has been dismantled? Some of them live in confined areas within refugee camps on the border between Syria and Iraq, others live as orphans in some Syrian cities while others are children of foreign fighters who have returned to Europe.
Today, many of these children are held in special sections set apart for them within the refugee camps of Middle Eastern countries. Their being kept apart is understandable given the atrocities perpetrated by Daesh. It is also true that, without a deep and specific de-radicalization, the Jihadist groups of the future will only increase. In this complex situation, the children are the real victims. In fact – as stated by Georges Abou Khazen, Vicar Apostolic of Latin Catholics in Syria –  “they exist and do not exist since they are not to be found in the registry of births and, without being registered, they cannot enrol in a school […] and so it is necessary to give a name and a future to these children to help them have a life to which they can look forward”.