Hundreds children are begging in the streets of Kampala City.  A Comboni missionary, Father John Bosco Mubangizi has launched a project “Karamoja Streets Kids”. Respect, protection and future for these children. He explains us the initiative.

For decades, the Karamoja region in the north-eastern of the country has been characterised by violent conflicts, high levels of poverty, semi-arid conditions and food insecurity. An estimated 82 per cent of the population live in extreme poverty.  As a result, the area has been dependent on food aid and donor assistance for decades, with numerous emergency aid programs.
To survive, many families in Karamoja have decided to send their children into urban centres hoping to get better opportunities. But in the end many of them end up begging in the streets. Most of those begging on the street in Kampala city are Karimojong children and youth. 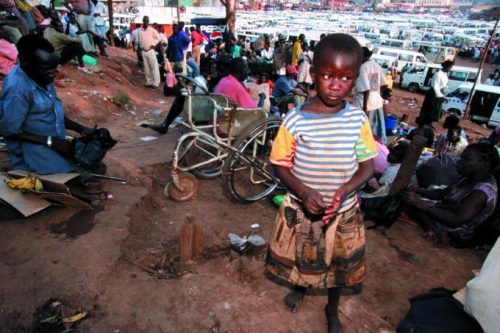 Not everyone welcomes these street kids from Karamoja. They compete with and face resistance from the older street children and are subjected to caning, or their money is taken away from them. During the rainy season the leaking temporary structures in Katwe and Kisenyi,  suburbs of Kampala, where they live are too crowded and they are supposed to contribute some money for this ‘accommodation’ despite the poor hygiene. They suffer all kind of diseases and no proper medical attention is offered to them. They are prone to accidents from the street since their main location is at traffic junctions where cars stop and where they can beg. They are often victims of motorcycle “hit and run” accidents and sometimes sustain fractures from these accidents without medical care. The worst happens when children simply disappear from the streets and are never seen again maybe because of the practice of child sacrifice witch doctors. Sadly, these children are used as sex slaves, defiled and/ or forced into prostitution. Many are impregnated, infected with HIV/Aids and other STI’s; because of this; there is a tremendous number of single mothers, aged 12-23 years old on the streets. Some child mothers can be seen on streets breast-feeding fellow children or carrying them on their backs.

I went to visit them

I met the Karimojong street children in Kampala in 2015, when I was still Parish Priest of Matany in Karamoja. One day on reaching Kampala Road in Kampala city near Diamond Trust Bank, about 50 Karimojong children surrounded me chanting my name in Karimojong “Pader Bosco, Pader. Bosco…..” …meaning Father John Bosco. At the beginning, I was surprised, but quickly I interacted with them; one thing I realised was that about 80% of these children were from the Matany area. Most of them were from Lokopo Chapel, one of the churches in the parish. They were my parishioners. 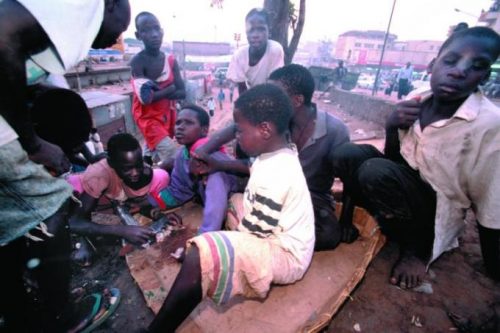 The following day I came back to the same place and asked them to take me to their places of residence and we followed Entebbe Road until we reach Kisenyi-Katwe slum. This is one of the worst slums in Kampala which is a haven for all sorts of vices ranging from smoking tobacco to drug addiction to all sorts of strong drugs. It is a common practice to see children picking food from dustbins, sniffing aviation fuel and smoking marijuana. Prostitution is rampant, theft, murder, alcoholism and general lawlessness is the order of the day in Kisenyi slum. Whether you are a child or an adult, life is the same. Children live an adult life but I think they are traumatised by it. At the end it is the innocent Karimojong children who are new to town life that suffer most of all. They are suffering the complete denial of their natural entitlements as human beings. At a deeper level of interaction, I found out that some children often go a whole day without any solid food. At night they sleep in groups and in turns in small shanty rooms made of wattle and mud to maximise time and space. The first group sleep for 6 hours and then give way to others who sleep for the rest of the night. Over 30 children occupy a room just eight feet by nine. When it rains, they cover themselves with sheets of polythene and stand for the whole night. 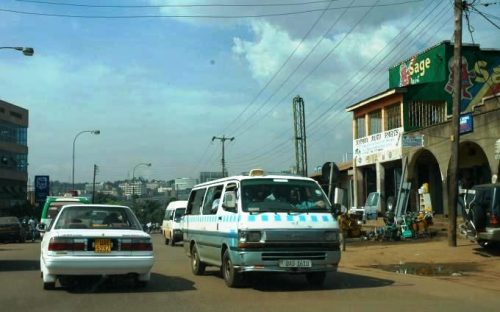 These are so-called Out of School children and so are illiterate. They have only one meal a day and sometimes nothing at all. They have no access to any health services. As a result, illnesses go untreated and some die. Most diseases they suffer from are preventable. For these children, using a toilet is a luxury because the use of a toilet costs an average of 200-300 shillings in the slum. The life of these children is without dignity and their rights as children are denied them.
They are extremely vulnerable and are greatly abused physically, psychologically and sexually. They are victims of commercial sex exploitation and there are no system in place for their protection. Not content with denying these innocent children basic care, education, food, health services and psycho social support, the adults behave towards them like predators.
Seeing these children abandoned, with only the help of God to rely on, made me wonder if we appreciate the value of the gift of life  our own and that of the extremely marginalises children on the streets
of Kampala.

We must do something to help

In 2017, I was transferred to the Comboni Missionaries community in Kampala and this gave me an opportunity and, at the same time, a challenge to start from scratch for the wellbeing of the Karimojong children in Kisenyi and Katwe.
One year earlier, during the Golden Jubilee celebrations of Matany Catholic Parish, in Karamoja, Mons Michael Blume the then Nuncio to Uganda said during his homily “ Matany Parish has celebrated its Golden Jubilee with many pastoral achievements what remains as the Parish Pastoral challenge are the Matany Children on the  streets of Kampala looking for  sweets that are never there…..” This statement entered deep into my heart and soul and the voice I felt within me told me I had to do something for these children but I didn’t know, what…” 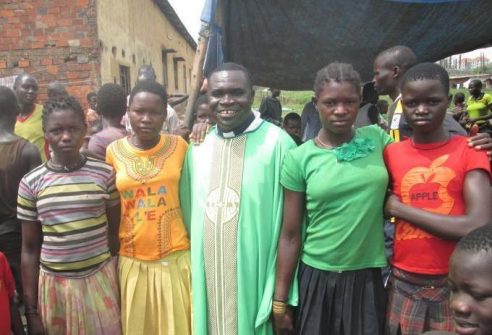 Finally, Bishop Damiano Guzzetti of Moroto Diocese discussed the question of the Karimojong children with the Archbishop of Kampala Cyprian Lwanga. They decided to start a pastoral initiative to help the children under Nsambya Parish.
Knowing the Karimojong language has helped me a lot. Children feel at easy when they can talk and understand what somebody what to say.  For a year now, I have been going every Sunday to the slum in Katwe and celebrate mass for the Karimojong community.  On average 200-400 Karimojong attend mass every Sunday. They have elected a temporary structure made of eucalyptus and polythene sheets where we celebrate mass.From the same structure we have started literacy and feeding programmes to provide education opportunities and food for the hungry children. So far two adults have been selected:  one to prepare food and porridge for these children and another one to give literacy classes for the Out of School Children. When children fall sick the leaders inform me and we provides medicine or the child is taken to a health facility.
Before considering a more sustainable, relevant and effective intervention, I have decided to see first to the immediate needs of the children – a matter not simply of human rights but of survival.