Three years after the establishment of the Guardia Nacional, created for the ‘prevention and fight against crime’, it has not produced the desired results. Violence on the increase.  Journalists the first
in the firing line.

Under the presidency of López Obrador, the Guardia Nacional project eventually came into being. The new body was formed by a special presidential executive decree, signed on May 11, 2019, which provided in detail for the resources and personnel necessary to equip the new departments that would be formed. 50,000 men have thus passed from the armed forces and the Policia Federal and the project plans to reach at least 100,000 members of the Guardia Nacional.
The establishment of the Guardia Nacional was presented by the Mexican president as a tool to increase security for ‘the prevention and fight against crime’. In addition, the decree declares that after ‘2024 the armed forces will not deal with public security’.
But in the meantime, the reality is very different from the expected formation of a civil-led public security corps. It happened that the men of the Policia Federal, who passed through the Guardia Nacional, were fewer in number than those of the army. 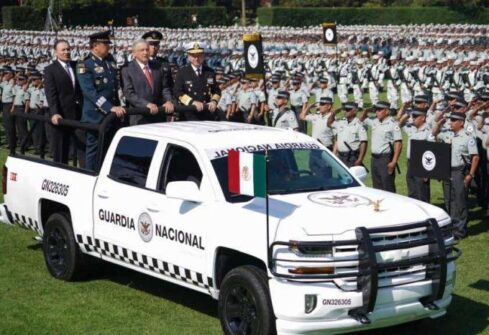 President Andrés Manuel López Obrador at the inauguration of the National Guard, on June 30, 2019 in Mexico City. (Photo : Mexico government)

And it is precisely the composition of the Guardia Nacional that has brought loud protests from civil society, NGOs, and the independent press since it is, in fact, a military and not a civilian police force. The over-criticized dissolved Policia Federal had, however, taken important steps to improve its functioning and counter the problems of corruption, the violation of human rights, and inefficiency. The tasks assigned to the new security force are very many, with dispersive results as compared to the objectives and resources provided for by the presidential decree, weakening also, in this sense, its impact on the increasingly precarious levels of security in Mexico. One of the first missions/operations was to send a large contingent of the Guardia Nacional to the US-Mexico border to block migrants from Central America, according to agreements made with the administration of Donald Trump. Agreements that were reconfirmed with the Biden administration, under the slogan ‘stay at home’ coined specifically to identify this type of migration policy. 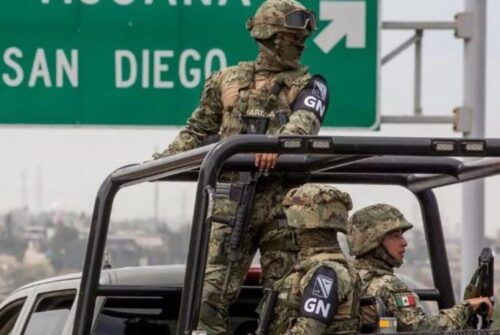 In 2021, a similar operation was conducted, by the army this time, on the southern border of Mexico. Along the border with Guatemala, 10,000 soldiers were deployed. As if the toll of daily killings and disappearances were not enough, the Guardia Nacional was also given the task of protecting ports and airports and controlling many road junctions of great importance, expanding their range of action. To date, there has been no improvement in security levels. The modest results show that nothing has changed, but rather worsened. Therefore, observers and analysts agree that the institution has (only) represented a phase of escalation in the process of the militarisation of Mexico. A truly unexpected move with a left-wing presidency, so much desired in the country, a move that shocked public opinion. To Mexican and foreign observers, it represents a de facto militarisation of Mexican states; Lopez Obrador is, therefore, the subject of strong criticism for ceding further room for influence to the armed forces, a level of influence that began to grow with the ominous declaration of the start of the ‘war on drugs’ in 2006. Organised crime and narco-gangs are spreading more and more. The big narco-cartels continue their perennial struggle for control of the plazas; they have infiltrated almost all aspects of the economy and are present in the trade of the famous avocados, the theft of gasoline from pipelines, and in public procurement. 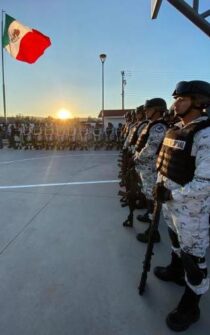 The narcotics militias are organised in hyper-armed paramilitary formations, with self-built armoured vehicles, heavy weapons, and drones capable of launching explosives. The flow of weapons coming from the United States is incessant. Clashes with the military and between rival cartels have reached quasi-civil war levels in recent years. But it is not only the narco-cartels that destroy the lives of Mexicans: the fragmentation generated by these criminal formations has increased their numbers, generating countless criminal gangs dedicated to extortion and kidnapping. The devastating levels of violence are frightening and a dangerous sign that Mexican society seems to have almost become ‘accustomed’ to these constant brutalities, a very serious indicator of social cohesion that is falling apart. The murders are hardly counted and, likewise, the disappearances that are largely equivalent to further brutal murders. A heavy contribution is made by the immobility of justice. Over 90% of crimes are not prosecuted, fuelling distrust of institutions. Complaints of human rights violations are increasing every month, as human rights watch explains in its reports. Civil society resists and tries not to bend to this constant violence. One very important factor is connivance between many of the governors, with their powerful state apparatus behind them, and the drug cartels. Corruption and connivance in these areas represent an enormous problem for Mexico. 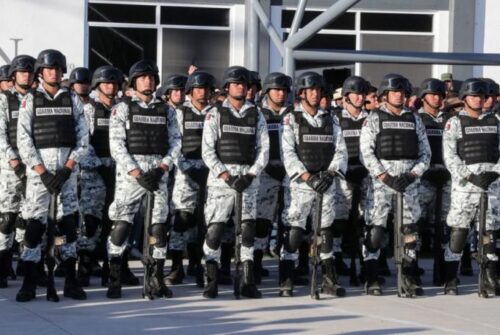 Most of guard troops, and all of the top officers, come from the army. (Photo : Mexico government)

Several former governors were later discovered to be instigators of murders, especially of journalists. But in essence, judicial investigations remain unmoved by the many tragic murders of journalists. Last January, 5 journalists were murdered, and one was very seriously injured as further proof of the disarray in the management of security in many Mexican states. Mexican journalists are forced to have armed escorts that are numerically insufficient for the purpose, and forced to put up posters saying ‘Prensa no disparen’ (we are journalists; do not shoot us) thus demonstrating clearly the extreme gravity of the situation. Of the many murders of Mexican journalists, only 5% were prosecuted by the police and judiciary. To date, about 1500 journalists come under the protection program, with an escort assigned to them. However, the ruthless hitmen have no scruples and thousands of information professionals are still without protection.