The fishing sector is crucial both for socio-economic stability and for the food security of the populations of the entire region. Fishing vessels from Europe, China, Turkey, and Russia are endangering the livelihoods of many local fishermen. We accompanied some fishermen on a fishing night.

In Soumbédioune, a colourful harbour nestled between the rocks of Medina, one of the oldest districts of Dakar, the bustle is incessant. Lines of women carry crates of freshly disembarked fish on their heads towards the stalls of the adjacent market, while a crowd of kids hops from one pirogue to another, sewing up nets and preparing lines, hooks, baits, and floats for the ‘grands frères’ who are waiting to set sail.
It is close to sunset. Today the sea is an oily expanse that placidly reflects the glint of the sun glittering on the surface.
Nearly perfect weather conditions herald a crowded and perhaps less risky fishing trip than usual. 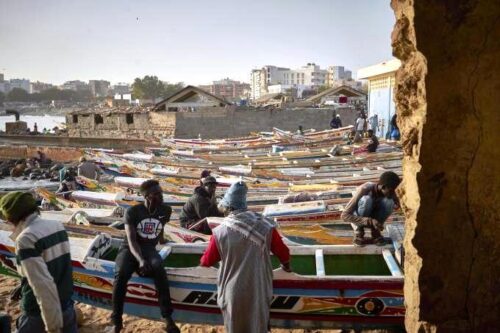 The fleet of ‘informal fishermen’ of Soumbédioune.

Sitting on the only and well-used bench or on polystyrene crates resting on the ground, their backs against the wall of a dilapidated building overlooking the beach, young and very young sailors who have recently returned to port take turns with their mates on the evening shift.
They stare at the ocean as if they could not leave it even after returning, safe and sound, to the land. Whenever a boat appears in the bay, pointing its bow towards the cliff to return to port, the boys jump up and quickly set out the logs to slide the hull over the sand and pebbles of the shore. Everyone participates, all together, in helping their companions to bring their catch to shore.
A human chain of mighty arms, tense muscles glistening with sweat, pulls the pirogues from the shore to the beach. Competition in these parts has not eroded mutual aid, that pragmatic pillar on which survival in the difficult contexts of life and work is still based.

A son of the port
Madj, like all the children of the port of Soumbédioune, scrutinizes the ripples of the waves without ever taking his eyes off the horizon. His face, furrowed by the wind and the sun, contracts with each gust, each wave, each increase in current, betraying his concern. Dressed in a military jacket, tracksuit trousers, an Air Jordan sweatshirt and an artist’s beret, with short salt-beaded dreadlocks sprouting here and there, this expert artisan fisherman in his forties knows the waters of Dakar like the back of his hand. 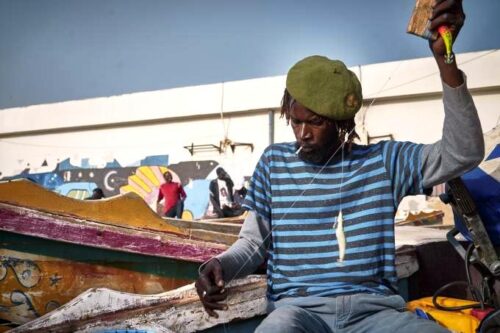 Madj, a son of the port.

“It can be said that I was born on this beach. I have a photograph of me as a child, on my father’s shoulders, taken right here”. Madj does not own a boat, but often accompanies his friend Bouba into the sea, a young captain of one of the many colourful wooden pirogues that, arranged one after the other on the beach, make up the fleet of ‘informal fishermen’ of Soumbédioune. Long and narrow dugout tree trunks on which the brightly coloured paint – the green-yellow-red of the Senegalese flag prevails – and the writings, especially ‘Allah’ and formulas of blessing in the Wolof language, only partially hide the cracks that open in the hulls, a thousand and one times riveted and repaired.
In the dry season, which in Senegal runs from October to June, mainly squid, sardines and trout are caught. They are particularly sought-after in luxury restaurants in the rich districts of Dakar, in regional markets and, even more so, in large-scale European, Asian, and American distribution: “I fell in love with this profession seeing the work of our fathers, our uncles and grandparents. Those were real fish! Today we only catch small fish, ‘African fish’. The best, or what remains of the finest tuna, swordfish, prawns, and crustaceans, are all exported”. 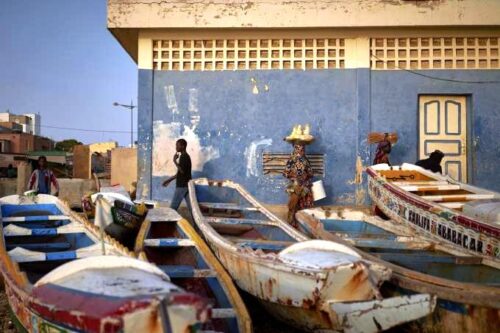 Soumbédioune, one of the oldest districts of Dakar.

Despite it becoming harder and less profitable over the years, Madj is proud of his job: “It’s a noble job, not for everyone. Only real men, not just any sort, go out to sea”. Like many Senegalese artisanal fishermen, hit by the worst crisis in the fishing sector in the history of the country, he too is constantly looking for alternative jobs to try to meet the needs of the family: “In recent years, many young people have deserted the sea to look for work on the mainland. Several then took the ‘path of adventure’, emigrating to the region or to Europe”.
The route leading to the Spanish Canary Islands, one of the most dangerous migratory routes in the world – even more lethal, according to the estimates of the International Organization for Migration (IOM) than that of the central Mediterranean – has regained strength in 2020, taking a further 50 thousand sub-Saharan citizens to the European coasts closest to Senegal, Mauritania, and Morocco. 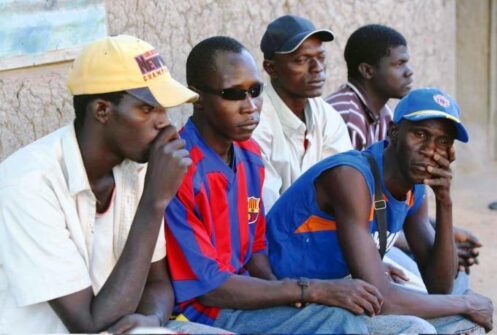 In recent years, many young people have emigrated to Europe. (Photo Swm)

As a result of the socio-economic crisis and the greater travel restrictions caused by the Covid-19 pandemic, in the last two years, hundreds of small fishing boats converted into precarious ferries of hope have evaded the patrols, by ship and helicopter, of the Spanish Civil Guard and Frontex, a private security agency in charge of controlling the external borders of the European Union.
Barça wala barcakh!, as they say in Wolof: Barcelona or death! A generational cry that provides a feeble foothold to the perceived lack of employment and prospects, especially by younger people, throughout West Africa.  (Photos: Michele Cattani) – (AdG)