Suriname is a unitary Republic with executive power vested in the President of the Republic, who is elected by the members of parliament for a five-year term; while the Chamber, composed of 51 seats, has legislative power.

The 51 members of the assembly are chosen from the ten electoral districts into which the country is divided from an administrative point of view. Six of these are located in the coastal area.
Paramaribo elects seventeen, while the district of Coronie, located a little farther west, elects only two.
The accentuated intercom division present within the country is also considerably reflected in the political sphere. Bouterse, of Creole origin, has always taken advantage of this, betting on the card of nationalism and unity among the few thousand inhabitants during his electoral campaigns. The years of his presidency, however, were marked by isolation in the international arena and an important break with the Netherlands which led to all types of financial aid being cut off. 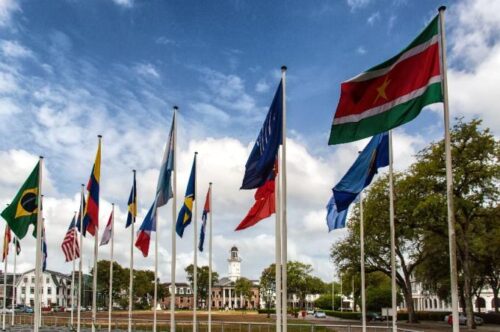 Flags of different countries of the historic city of Paramaribo. 123rf.com

The only relations Suriname maintained at that time were with Guyana, and Venezuela. In particular, a bilateral cooperation relationship had been established with Venezuela in the fields of agriculture, communications, legal assistance, fisheries, energy, transport, culture and health. In 2005, Suriname decided to participate in Petrocaribe, an alliance proposed by Venezuelan President Chávez aimed at strengthening cooperation and solidarity relations between Caracas and the Caribbean countries. This relationship was essentially based on the sale of oil at a reduced price and on favourable terms. In addition to Guyana and Venezuela, the country has only sporadic relations with the rest of the countries of the South American region.
This, above all, was due to the cultural diversity of the country and the poor flow of trade which is directed mainly towards the USA and Europe. In fact, even with respect to the large organizations set up by the countries of the region, the country initially limited itself to participating in the Amazon Cooperation Treaty – that is, a cooperation between neighbours for the preservation of the Amazon forest – and from the 1990s, after the end of the dictatorship, it began to weave timid relations with its neighbours, and in particular with the countries of the Caribbean area. 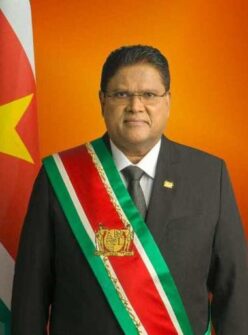 In fact, since 1995 Suriname has been a member of CARICOM, an organization that aims to promote the economic integration of members, subsequently also entering the CARICOM Single Market and Economy, a strategy developed by some members of CARICOM to further strengthen economic integration. It was only after 2008 that it joined UNASUR, CELAC and Mercosur.
Due to its strategic position and the mineral resources present within it, Suriname was tempting to Chinese investments whose penetration was further favoured by the historical Chinese community present in the area. In this regard, suffice it to say that Huawei and other Chinese companies are playing a central role in the creation of ‘smart cities’. Furthermore, China is Suriname’s largest creditor. As it is obvious, the Chinese purpose is to invest in the countries of Central America and the Caribbean basin with the main objective of increasing its presence in this area in order to challenge the diplomatic domination of the United States in the region. 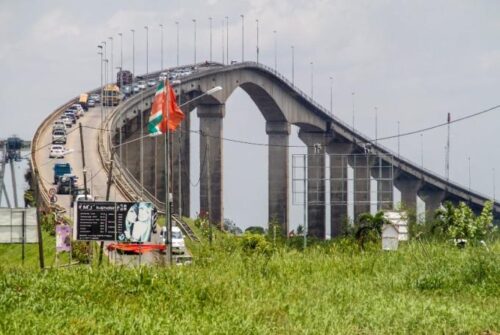 This strategy certainly also includes the agreement signed between China and the CELAC countries for the three-year period 2022-2024 to strengthen economic cooperation. It should be noted that in the last two decades the links between China and Latin America and the Caribbean have grown commercially, especially in the period from 2000 to 2020.
In 2020 the National Assembly elected Chan Santokhi to lead the country, thus ending the Bouterse era. According to some analysts, this constitutes a new era, also in terms of international relations and therefore a greater opening of the country towards the Western hemisphere. (Open Photo: Presidential palace in Paramaribo. ©mathess/123RF.COM)