The life of refugees is hard. When they arrived in Moyo (Uganda),in the South Sudanese of Kajukeji, they were many, they were thirsty, it was hot… then it rained and the fields flooded. Many of their belongings were dragged away by  floods and roads became impassable. Little by little, the NGOs started to supply some of the basic services such as water, which is transported by tanker trucks  when they can pass through the flood-hit roads. 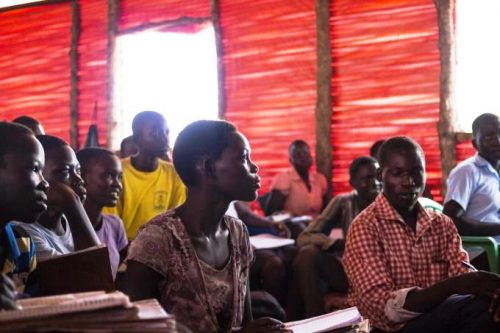 Some wells were opened. Scarce food supplies arrived, but people had to be standing in endless lines to get it. Access to healthcare is even more difficult. Trying to reach Moyo’s health centre, without ambulances and passing through the flood-hit roads is a painful odyssey. Those who are lucky and are able to reach the place, have to wait hours to be visited and besides, drugs supply is limited and medicines are often out of date at the health centre. It is therefore very difficult to cure seriously ill people in these conditions. 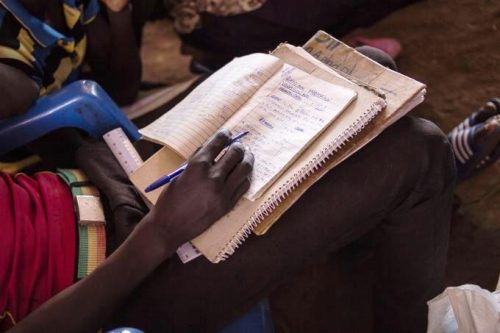 As far as education is concerned: “Still at the end of April 2017, no school was available”, says the missionary and parish priest of Kajukeji, Jesús Aranda, “so the teachers of the Comboni College in Lomín (Kajukeji), who in the meantime had arrived at the Moyo area, decided to volunteer their time and skills to establish a secondary school for the young people of the place. “So we set up some canvas under the trees, establishing six classrooms, a staff room and a laboratory, and the Comboni teachers started to teach classes in this school under the trees”. Okumu James Alan was the director of the Comboni College in Lomín, one of the most prestigious schools in South Sudan. Now he is in charge of the Idiwa Parents Secondary School, which offers tuition to some 600 young people in a humble facility made of cane, wood and canvas. “When young people arrived here, they were bored and used to spend their times just watching videos, drinking or even stealing. They had to get back on track!”, says Okumu. 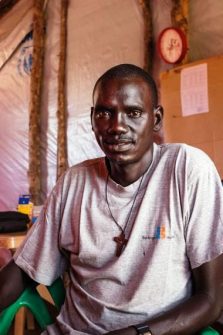 At first, parents and teachers were confident that institutions would guarantee  education, but nobody did anything, so they mobilised to get a permit and opened a community school. The parents contribute minimum sums of money to buy didactic materials, to build the still precarious structures and to offer small incentive pay to the professors. “Unfortunately some young people arrived here alone and do not have the support of their family. So not all of them can afford attending the classes at our school, because they must save the little money they  have  to buy food which is always very scarce. And at the moment unfortunately, we are not able to offer completely free tuition, which is why we are looking for  partners that allow us to take on more students. We are also proposing the ‘Food for education’ program in order to increase school participation”, says the director. Okumu also underlines that attending classes from morning until 5 pm without eating is a ‘challenge’. “Concentration becomes difficult on an empty stomach”. 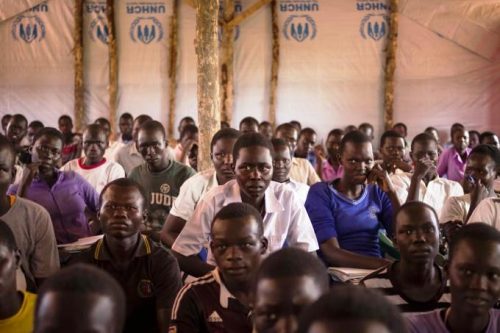 However, the atmosphere here in these humble schools, is the same as that of the  one that can be found in any other traditional school: there are respectful and enthusiastic students.
“We hope to increase the number of girl students, who are now only half of their male colleagues. The problem arises from primary school”, Okumu explains. Many girls leave classes. South Sudanese culture somehow influences families which prefer to pay tuition fees for boys rather than for girls”.
School director Okumo says, “we would like to return to our land, but the war seems not to follow a clear direction and it may drag on for a long time. On the other hand, if peace were imposed it would not last long either. In the meantime we’ll keep on teaching in our humble school under the trees”.