The folk art of phulkari, that represents the tradition and culture of Punjab, is now regaining popularity globally.

If it is colourful, geometrical and traditional, it is got to be phulkari, – the magnificent hand embroidery from Punjab.  Literally meaning floral work, phulkari has been synonymous with the people and the culture of Punjab for centuries. In fact, it continues to be an integral part of the religious, birth and wedding ceremonies in the northern state of India.
The women of Punjab still embroider odhnis or chunris (shawls to cover the head) or ghaghras with phulkari work.
The word phulkari first appeared in Punjabi literature in the 18th century when poet Waris Shah, in his composition Heer Ranjha, elaborated on Heer’s trousseau. Famous Punjabi artist Amrita Shergil, in her painting Resting, immortalised phulkari, where a woman sitting among a group of Punjabi girls is seen wearing the craft work.
Legend has it that phulkari arrived in India from Iran where it was called gulkari meaning flower crafting. 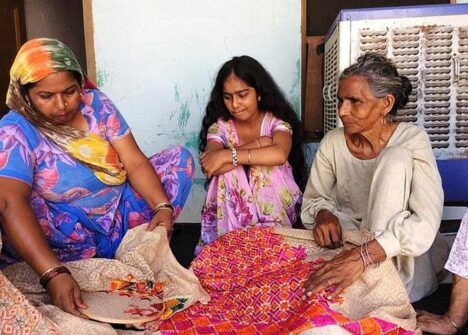 Usually, embroidered shawls and ghaghras was made by a family for personal use and having completed a phulkari signified an important step for an unmarried girl on her way to becoming a woman. As phulkari was part of a girl’s trousseau, she had to work on it herself from an early age.  In fact, her proficiency in the skill added to her eligibility as a bride.
In the past, on the birth of a girl child, the mothers and grandmothers world star making phulkari, to gift them at the time of the girl’s wedding.  The parent would give away dowry of 11 to 101 phulkaris, with bagh phulkari being the most precious and impressive one.
The rich and the famous families occasionally employ professional embroiderers for bagh phulkari where an entire surface is ornamented
by a connected pattern. 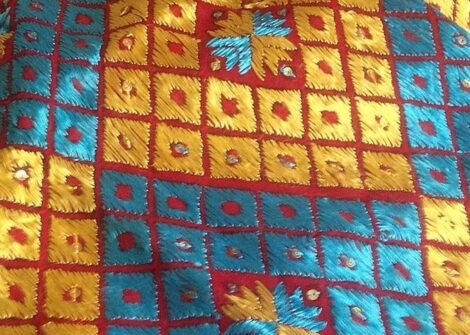 Today, phulkari is done on cotton, chiffon, georgette and silk. However, plain cotton fabric or khaddar was used. The thread was manually spun and dyed with natural pigments.
Punjab, known for cotton cultivation, was an appropriate region for producing khaddar locally. From 50 varieties of phulkari stitches in vogue at one point, only a few have survived. The stitching is now done with silk thread. Cotton or woollen threads are used occasionally.
With the use of long and short darn stitches on the wrong side of a coarse cotton cloth, a variety of characters, form and designs are created. Some other stitchers like herringbone, running or button-hole stitch were used earlier.
In traditional phulkari, the patterns are dispersed at intervals over the cloth. With skilful manipulation of the darning stitch, numerous intricate motifs are contrived through horizontal, vertical and diagonal stitches. A peculiarity of phulkari is that the fabric itself is used geometrically as an inner decoration so that the medallions or diamonds are not just patters sewn on but become an integrated combination of colours. This is achieved with absolute accuracy in thread counting. The narrower the stitch, the finer the piece.
Madder brown, rust red or indigo are the preferred choices for background colours. The stitchers are golden yellow, white or green. 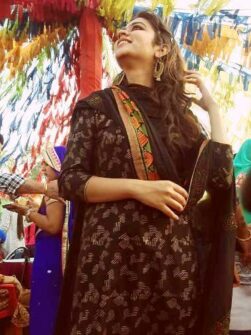 There are several varieties of baghs or garden styles in phulkari. Some of the baghs are shalimar, chand, chaurasiya, satranga (seven-coloured), pachranga (five-coloured) or bawan bagh where the fabric is divided into 52 boxes with embroidery.
The baghs are named according to their utility and the motifs embroidered on them.
Vari-da-bagh is gifted to new brides by her in-laws upon her arrival at the new home.
Most common motifs used in the embroidery are based on the wheat and barley stalks that grow all over Punjab. When pieces of mirror are stitched on phulkari, it is called shishedar phulkari. Another style of phulkari, with its own set of motifs, is darshan dwar. Here a gate is embroidered on a fabric and is offered at temples and gurdwaras. Other types of phulkari include Thirma phulkari which is seen as a symbol of purity as it has a white base fabric. In Sainch phulkari , motifs represent the Punjab’s rural life of Punjab with the use of human figures, animals and birds. 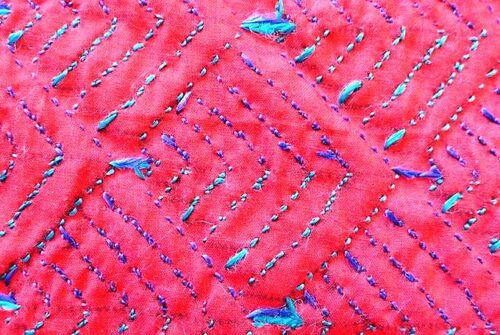 Along the years the art and craft of making a phulkari have almost disappeared. Today a number of non-governmental organizations are working to keep this rural art alive.  In fact, the method of creating a phulkari work has also changed with machines replacing manual work. However, a significant increase in the demand for the traditional phulkari in India and abroad is s sign of popularity, timeless appeal and uniqueness of this traditional Indian embroidery. (Open Photo: Embroidery on a shawl from Punjab. CC BY-SA 4.0//Kritzolina)