A small people of Mauritania compelled to change their lifestyle to survive. They once lived in the desert where they hunted wildlife and gathered wild fruits and herbs. Today they raise dromedaries.
Despite being relegated to the margins of society, the Nemadi have never lost their liberty.

To the south of Oualata, one may meet with them at a well as they water their dromedaries. If at first sight there is nothing unusual about the scene, a closer look shows a different sort of people: slender, like all the rest but their clothes are not always blue, unlike all others, and their eyes are sometimes of a clear colour, a unique characteristic. These are the few remaining signs of distinction of the Nemadi. Their history is difficult to trace since almost nobody remembers it. 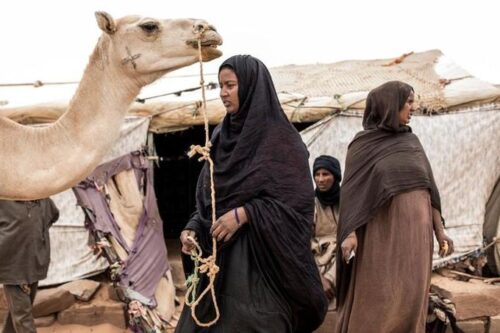 The anthropological books do not clarify the origins of this people so distinct from the main groups that make up Mauri society.
In Mauritania, Berbers and Arabs are seen as making up a single society, that of the bidan (‘whites’). Their assimilation began in the XVI century when the Arab tribes of the Hassans arrived in Mauritania where they conquered and absorbed the local Berber populations. Many sections of the population from that time onwards became tributaries of the Arabs and the scourge of servile labour, a nuanced term to speak of slavery, took root in society.

The origin of the name
The Nemadi, are one of the non-slave minorities though subject to the payment of tribute, like the Imraguen, a fishing people living along the northern coast. Today, the Nemadi are pastors, devoted to raising dromedaries but, until the recent past, they were hunters of small game and gatherers of wild fruit and herbs. Their name indicates the term ‘nomads’ the etymology of which is the Greek word nomós (‘pasture’). 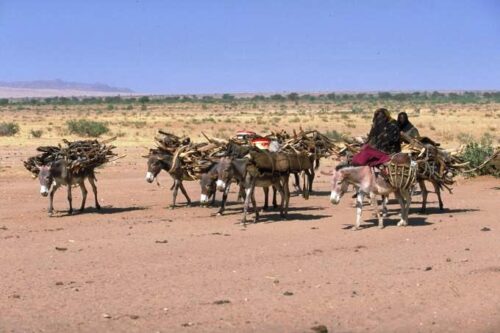 In the ambit of anthropology, the term is usually attributed to the populations that by pasturing in vast arid territories which they know well and whose sparse, scattered resources of water and grass, they use to their advantage, and move according to various modalities and rhythms, together with their animals.
Today, the tendency is to use the term and concept with reference to all peoples with no fixed abode, dwellers in desert places and used to wandering, even if not for pastoral reasons. This is the case with the Nemadi, also known as the N’Madi, hunters and Arabophones who, until the 1880s, lived in the area of Nema, from which, presumably, they take their name, located to the south of the well-known oasis of Oualata.

A precarious existence
Today, the Nemadi do not possess land and live in rather precarious huts built of straw and pieces of cloth, quite different from the classical khaima of the Mauri (tents woven from goat or camel hair and, today, increasingly made from white cotton). There have been no official censuses by which to obtain up-to-date figures, but it is estimated that they are few in number, amounting to only a few hundred. Among the reasons for the demographic decline and the change in lifestyle is the reduction of the game they used to hunt, especially antelopes, oryxes and addax gazelles. The drastic reduction in the numbers of wild animals was not caused by them but by a combination of factors such as indiscriminate hunting which the Mauris, spread throughout the whole country, practised in past decades using modern arms and motorised means of transport. 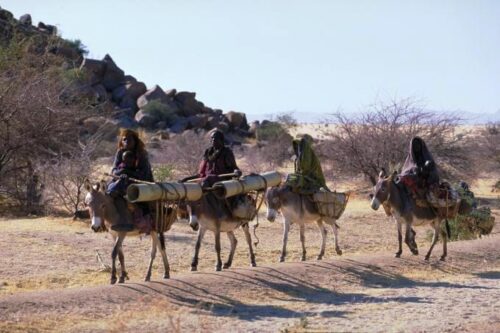 The large dama gazelle, for example, was once widespread all over the Sahara but is today greatly reduced in numbers. Desertification, fed by climate change, is irreversibly reducing its habitat also in Mauritania. Its hunting has been banned to protect the species, but the indiscriminate ban has ended up penalising the poorest and most fragile communities such as that of the Nemadi who once used its meat as their main source of food and now find it hard to get enough food to eat. As with all peoples who are used to moving within their surrounding space, the adoption of a sedentary life is the most one can expect from them, and perhaps the rearing of dromedaries is the lesser evil, bearing in mind that this is the most prized animal in the country and ownership of it guarantees a degree of prestige.

Cut off from everyone else
However, the Nemadi live on the margins of society. Considered ‘savages’ by the Mauri, they are relegated to a position outside the pyramid of the social classes (like the Untouchables in India), and even considered inferior to the harratin, the black Sub-Saharans. 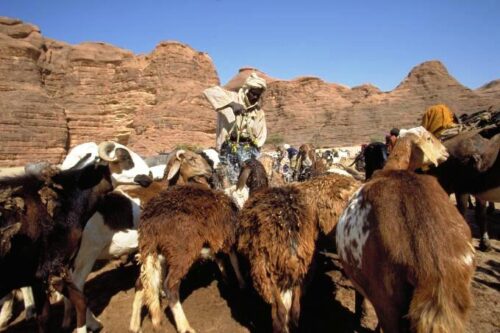 It is said that the Nemadi were in the habit of hunting during the hottest part of the day when the prey was tired from the heat. The use of dogs (so valuable that they formed part of the marriage dowry), highly skilled in isolating and immobilising their prey, rendered the Nemadi unique and renowned in the Sub-Saharan areas.
It was perhaps due to the fact that they moved together with their dogs, animals indicated as impure and undesirable in the Arabic-Islamic world, that they became so disliked.
Like all minorities, the Nemadi have suffered discrimination and prejudice. The fact that today, little or nothing is known about them, points out two facts: their dilution within the dominating social fabric and the darkness that seems to have descended upon their civilisation. In their solitude, they have not succeeded in carving out for themselves a space of liberty in the heart of the desert.