He is considered one of the best living blues guitarists. He has succeeded in combining the nomadic culture with sounds that charm the largest international audiences.

His real name is Goumar Almoctar, but in the world of music he is called Bombino.  A Niger Tuareg, he was born in Agadez, in the heart of the Sahara, on 1 January 1980.  His childhood was not an easy one amid tribal tensions and unending coups in the state of Niger that forced him to emigrate with his family to Algeria and later to Libya. Here he worked as a shepherd for some time, passing the time learning to play his old guitar: this self-taught apprenticeship proved invaluable when, in the late nineties, he could finally return home. In the meantime, the ‘Desert Blues’ – a mixtures of ethnic sounds and Anglo-US rock music – had become second nature to him and he based his music on that of Jimi Hendrix and Mark Knopfler, then leader of  Dire Straits. 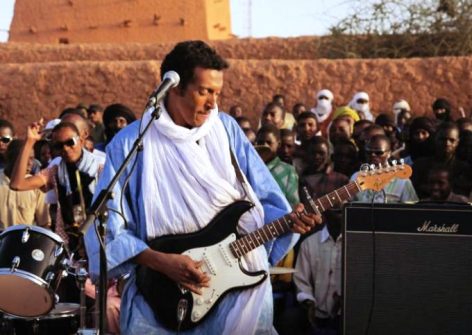 His debut album ‘Group Bombino’, issued in 2009, was followed by another recorded live in Agadez, but it was it was only with the next album, ‘Nomad’ (produced in  2013), that Almoctar succeeded in gaining the attention of serious critics due to his highly individual style and remarkable technique.
Soon afterwards he toured the United States, also arousing the interest of the European scene. His reputation grew with various collaborations, even with such leading figures as Keith Richards, Robert Plant, Stevie Wonder and endless invitations to the most famous festivals in the world. A few months ago, his fifth production was launched on the international market: the album ‘Deran’, recorded in Casablanca and followed by a new world tour. 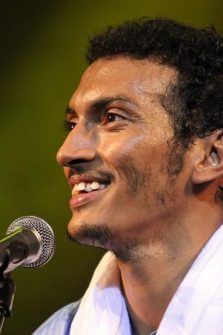 Now the biggest star of Desert Blues, Bombino has unquestionably succeeded in combining his own nomadic culture with sounds capable of filling the largest western venues: his is a modern style that respects its own traditions and contains original sounds, without reducing them to mere exotic entertainment. It is from here that, besides rock and blues, other sorts of music emerge such as funk and reggae (the so-called Tuareggae, as some critics call it).
Bombino is undoubtedly a virtuoso rock guitarist (The  New York Times described him as ‘one of the best living guitarists’, but always used his talent to serve his inspiration, often strengthening it with reference to his own life experience, the history of his people and of a special ethnic group, ‘The Blue People’, as the Tuaregs are called. Further interest is added by his concern for the social problems of the times, especially those concerned with large-scale migrations and the conditions of refugees which he himself experienced. 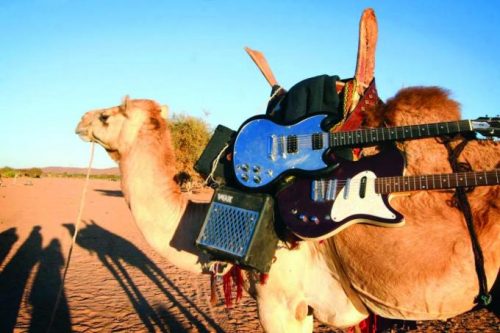 In this sense, the excellent album ‘Deran’ represents a sort of home-coming, being recorded entirely in his mother tongue, Tamasheq. The title itself, which we may translate as ‘Best Wishes’, is meant to be a small sign of hope for North Africa which is afflicted by socio-political and humanitarian disasters of epic proportions and, at the same time, an act of love towards a culture that is the patrimony of all of humanity
On April 1, 2016 Bombino released “Azel” the album brings Bombino’s guitar playing to the forefront while staying true to his desert blues roots as he sings in his native language of Tamashek. In 2017 he release La Sombra and last year, his sixth studio album, Deran. It was received with wide-spread acclaim for both its musicality and its embracement of culture and heritage.