The new geographic mafia is making increasing inroads into the growing economies of the sub-continent. One of these is Mexico which, besides being a new geopolitical and geo-economic actor in the region, may be considered one of the principal centres of world drug trafficking where, for years now, the ‘First Narcotic World War’ has been raging with around 100,000 victims in the last decade. The breadth of the phenomenon is conveyed by the declaration made in November 2009 by the Director of the International Centre for Legal and Economic Development, Edgardo Buscaglia, according to whom “the Mexican economy is greatly conditioned by the drug cartels since more than 70% of the various economic sectors have been ‘infiltrated’ by criminal organisation whose financial resources amount to 40% of GDP”. 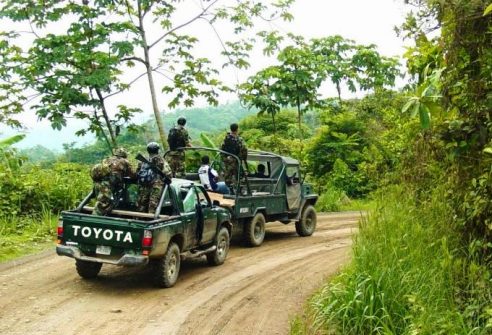 Then there is Colombia which, though it has lost its primacy as the fatherland among leading drug trafficking countries and whose gestures became legendary, is still one of those countries where the drugs business produces a major portion of the entire wealth of the country. Such an index, besides being a warning as to the stability of the economy of the country, reveals the failure – in a more malicious view the ambiguities – of the Colombia Plan implemented by the United States to counteract the illegal cultivation of drugs. The dominion of the great cartels has gradually been supplanted by a fragmented market with weak hierarchies and characterised by the multitude of groups with very small numbers which have led the intelligence authorities to define the phenomenon as the ‘miniaturisation of the cartels’. These groups, which operate in ever more close alliances with the Mexican narcos, behave very discreetly in spending money and making investments. 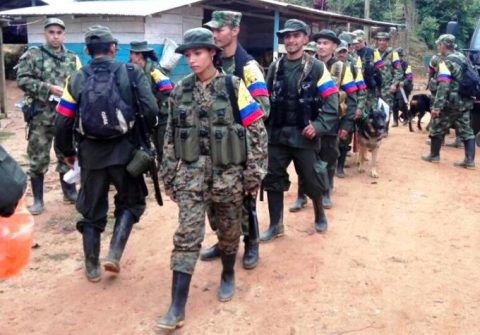 In the Colombian context, the role played by the FARC and other guerrilla groups such as the ELN, has been crucial. In the early nineties, the FARC took part in the drug-trafficking business by demanding the payment of a tax in exchange for the protection of the illegal cultivation and transport of the goods. Later, protection was extended also to the laboratories and especially to the clandestine runways for the use of the small aircraft which, packed with narcotics, transport the goods to their market destinations. In recent years, the guerrillas decided to abandon the previous policy, choosing instead to directly run the cultivations of coca and opium, a decision that led analysts to speak of ‘the FARC cartel’. This cartel became even stronger following the operation carried out by the government against the cartels of the Valley of the North of Cali and Medellin. Furthermore, the guerrillas took up a fortified position on the border with Ecuador, also occupying portions of Ecuadorian territory in areas extremely difficult to reach where they set up their own drug refining and storage centres. Today, the FARC, following the peace treaty signed with the Colombian government in September 2016, is undergoing a process of fragmentation which is transforming it into small armed paramilitaries engaged in drug trafficking. Considering the fact that the organisation counted about three thousand militiamen, there is no doubt that this represents a serious problem with which the Colombian government is faced. 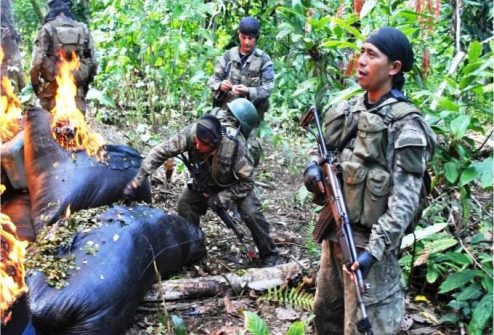 Peru, too, is one of the countries involved in the phenomenon of the production of narcotics. As in the case of the FARC in Colombia, the rebels of the Sendero Luminoso play a leading role in the production and marketing of cocaine and with considerable profit, thanks to the fact that, in recent years, the country has exponentially increased the area devoted to cultivation, thus moving into first place  in terms of cocaine production.
Even though the government of former President Humala is pursuing a fight with no quarter against the rebels, availing of United Staes help, there is a faction within them – called Proseguir – which , while remaining active in the region of Vrae, has transformed itself to all intents and purposes into a drug-trafficking organisation. The region, which was always the prerogative of Sendero Luminoso, is located in the south of the country, in the department of Ayacucho. The thick and inhospitable woodland vegetation, together with the high level of humidity, have created the perfect situation to make that place one of the main centres of cultivation of coca in the world, boasting the best quality of plantations. The rebels, for years based in the territory, exercise strict control and, thanks to the large arsenal at their disposal, are capable of opposing and rendering fruitless the numerous attempts at eradication carried out by the army. Under cover of the forests, the Senderos manoeuvre the sale of tons of coca throughout the entire region and direct the process of production. Transportation is effected either overland through Ecuador, crossing the region of Guayaquil, or by air, mainly from the central region of Bajo Huallanga and Yarina. There, five or six times a month, the drug traffickers transport a ton of coca with each flight. In recent times, due to  close control by the Peruvian army and police, the route now used most is that of river transport. The rivers that the ‘narco-terrorists’ use most frequently are the Putumayo and the Leticia for narcotics from Colombia, and the Ucayali and Amazonas when transporting narcotics to other bordering countries. 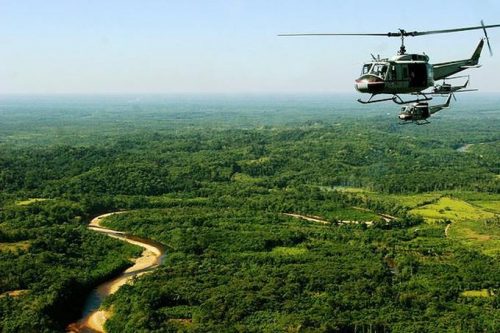 The offensive launched by former President Humala obtained notable results in terms of arrests but much less in terms of the effective reduction of the plantations. Nevertheless, also in this case, not a few people see the crusade against coca, carried out with the help of the United States, as a geopolitical pretext on the part of the USA to establish itself in the Andean country by means of development plans that include the construction of an army and air force base in the region of Vrae, thus copying the Plan Colombia which, without defeating the drug traffickers, militarised the country. In this regard, some analysts, connecting the ‘war on drug trafficking’ with the struggle for the control of natural resources and the expansion of the neo-liberal programme, hypothesise that the groups in question (when they have abandoned their ideologies) may also act as a counter-insurrection apparatus, the aim of which is to disseminate panic among local, regional and national capitalists, forcing them to end their activities and allow the supranational entities to gain access to the economic sectors previously controlled by them. In fact, we must not exclude the possibility that this emphasis could help to create a useful pretext to launch an offensive for the control of the region and, more particularly, of some strategic areas such as the triple frontier. That area, having for some time been in the sights of US strategists due to the presumed presence of groups of Islamic terrorists in league with local crime, would, according to some analysts, represent an area of strategic importance both for the water resources of the Guarani catchment – known today as the third largest reserve of underground fresh water in the world – and for its geographic centrality which, once conquered, would permit the military control of the entire region. This hypothesis does not seem so far-fetched if one considers the outcome of the Plan Colombia and the Plan Merida. 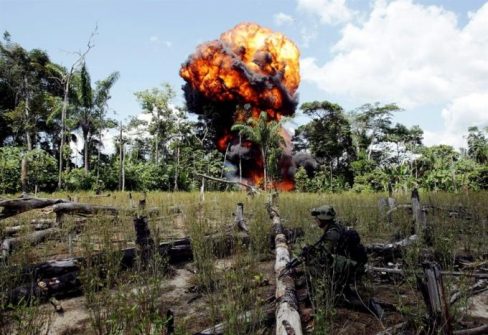 The concentration of the production of cocaine in South America makes this area the starting point for all the routes which are initially high density flows of goods directed towards the consumer markets. While North America is the landing place of the first flow, the second is that of Europe that crosses Venezuela and the Caribbean or the south of the continent – Brazil and Argentina. Leaving the Atlantic coast, drugs directed towards Europe are transported aboard narco-flights that often stop at West African airports. About 20% of the drugs remain in the country to increase local consumption while the remainder is sorted and sent to the European market aboard ship or other fortuitous means of transport.On the route towards Europe, the ‘ndrangheta’, a well-known Calabrian criminal organisation, dominates the white powder market in the old continent, playing a strategic and fundamental role in the alliances with the Mexican narcos. Supplanting Cosa Nostra, the ‘ndrangheta’ has become a perfect partner thanks to its network which facilitates the ‘placement’ of drugs anywhere in the European continent. The Calabrian organisation was preferred by the Mexicans to that of Sicily because it was considered – and with good reason – more solid and trustworthy, having family ties binding on all its affiliates which notably reduces the danger of intervention by collaborators of justice.