It is an evergreen tree, native to tropical Africa especially West Africa. It usually grows to an average of about 13-20 meters in height with a diameter of about 50 cm.

The plant produces a star-shaped fruit which contains between 2-5 kola nuts. About the size of a chestnut, this little fruit is packed with caffeine, tannin, and theobromine phytochemicals.
The tree is seen as a symbol of hospitality, cultural beliefs, social ceremonies and, as well, is grown as an ornamental.
In West African countries, Cola acuminata is prized for its effects as a central nervous system stimulant.
Cola acuminata nuts have a bitter taste when chewed fresh but the taste becomes milder in dry nuts. The nuts can be roasted, pounded, or chewed, and can be added to drinks, such as tea, milk, or porridge.
In traditional medicine, the Cola acuminata plant is used against numerous diseases including atonic diarrhoea, dysentery, vomiting, high fever, piles, stomach ulcers, depression, chronic fatigue syndrome, melancholy, lack of normal muscle tone, exhaustion, constipation, and migraine headaches. 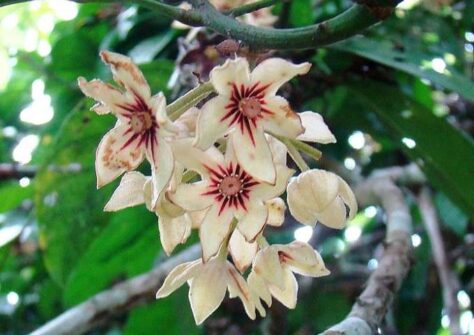 Cola nut is used for the treatment of whooping cough, malaria, asthma, and acts as a bronchodilator due to the caffeine in it. The nuts are known to have antimicrobial, analeptic and lipolytic properties and can stimulate gastric juice secretion as well. Traditionally, the leaves, twigs, bark, fruit follicles, and flowers are used in the treatment of dysentery, diarrhoea, coughs, vomiting, and chest complaints. Cola nuts have been linked with natural fertility regulation.
The plant is also used in treatment and management of cancer, as an antidote for poisoning, increasing alertness, and motion sickness. It is used by native people as a stimulant, chewed to alleviate fatigue, hunger, and thirst, especially when on long hunting trips. Due to its astringent properties, Cola acuminata is used as a non-addictive stimulant in the treatment of diarrhoea and dysentery and to prevent vomiting in cases of high fever. It has also been used in the treatment of headaches and migraine. 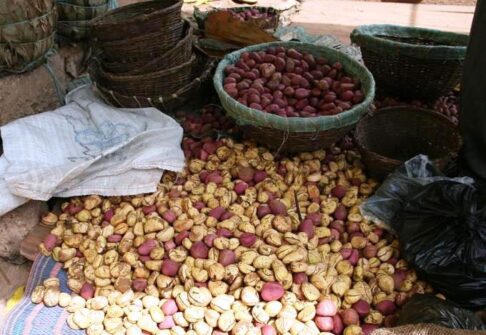 In some communities, Cola acuminata has been used in folk medicine as an aphrodisiac, an appetite suppressant, to treat morning sickness, and indigestion. It is applied directly to the skin to treat wounds and inflammations. The tree’s bitter twig has been used for cleaning the teeth and gums.
The fruits are used as tonics, stimulants and concoction from the fruits used for the treatment of fever, dysentery, and exhaustion.
Cola nuts contain caffeine and hence believed to counteract overstrain and depression thus improving the physical and mental state when taken. The crushed nuts may be boiled together with the leaves of Moringa lucida and the resultant infusion taken internally to cure piles. The nuts ground to a fine paste, together with the leaves of Scoparia dulce, are dissolved in a little water and a few drops are administered orally to babies for treatment of headache. An infusion of the bark mixed with ginger and a little pepper is taken internally to cure stomach ulcers. 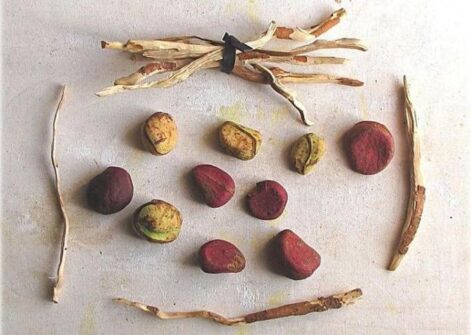 Apart from its medicinal activities, Cola acuminata aromatic seed is rich in caffeine and is often chewed or ground into a powder and made into a drink and taken to give energy, increase alertness, retard hunger and fatigue, aid digestion and increase stamina. When the whole nuts are chewed, they taste bitter at first, but they leave a sweet taste in the mouth later that affects other foods or drinks that are consumed.
Thus, chewing Cola nuts before drinking water helps to render the water sweeter. An extract, prepared from the dried kernels is used to flavour non-alcoholic soft drinks, ice cream, candy, and baked goods among others. The kernels can be red, white, or pink. In fact, the red kernels can be used as a natural food colorant. Its usefulness for traditional purposes especially in West Africa span from social life and religious events, to sealing business contracts.
The chemical contained in Cola acuminata including catechin-caffeine, theobromine and kolatin may explain the numerous uses of this plant throughout its distribution range. (Photo: CC BY-SA 4.0/ Scamperdale)