Young Senegalese artist Ina Tiam takes fashion shoots in places covered with rubbish and plastic around the capital Dakar, to denounce the degradation of the city.

Her pictures of young and attractive girls dressed in expensive clothes, but surrounded by plastic, garbage and all kinds of waste, have gone around the world. However, that is the scenario that young photographer Ina Thiam sees daily behind her own house in the Pikine neighbourhood, on the outskirts of Dakar. “I intend to shock, and provoke a reaction. If I simply took pictures of garbage, people would not even notice it, since they are used to it. I wanted people to ask themselves questions”, she says. For her, photography is also a form of denunciation. 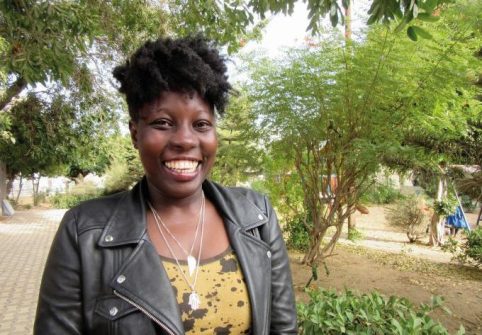 Ina Thiam is 33 years old and one can see her inner strength just by looking into her eyes. Ndeye Fatou Thiam, her real name, was told ‘no’ twice, just because she was a woman. The first time was when she wanted to study mathematics and then when she wanted to candidate herself as customs officer, but her family said ‘no’. ‘This is not right for girls’, they explained. When she began to spend some time with some rappers and hip-hop singers of the multidisciplinary group Africulturban, she was told again she’d better not. But that time she put her foot down and kept on meeting those artists “I learnt music production from them and then I entered the audiovisual world. They gave me a camera and I had to record all their concerts”, she recalls.
Her switch to photography occurred in 2012 after meeting Fatou Kandé Senghor ba. “Video is speed, while photography is time to stop on a still image that may express several things”, she says. American artist Martha Cooper, who portrayed the graffiti artists of the seventies as nobody else was able to do, is a referent point to Ina Thiam, who just like her American colleague, captures an action to turn it into an image. Ina Thiam takes pictures of several Senegalese rappers like Fou Malade, Simon, Didi Awadi or Matador. “They are people who fight to change things, I try to do the same through my photos”, she says. 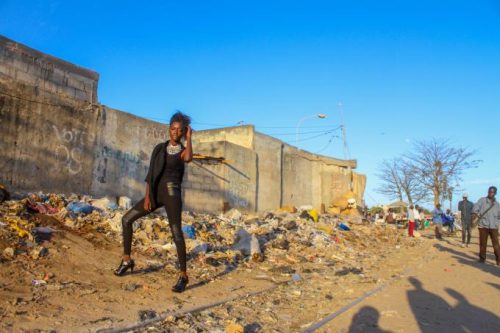 Pikine, the place where she was born, is a neighbourhood with huge environmental problems. “It’s polluted, and kids here play among garbage and puddles of stagnant water.  While I am convinced that the State should do something about it, at the same time I think that people could clean up their neighbourhood and should stop littering. But they seem not to care about it. One day I had an idea, I decided it was time to make the inhabitants of the neighbourhood aware of the degradation of the area. So I asked my friend Wasso to wear an elegant dress, and to come to my house. When she arrived we took a chair and went to the landfill behind my house, I asked her to sit down and pose for some shoots. That’s how it all began”, she recalls.
“People say that the City Council should take initiatives to solve the degradation of the Pikine neighbourhood, but that would not be enough if people do not stop littering. The inhabitants of the area are also responsible for its degradation”. 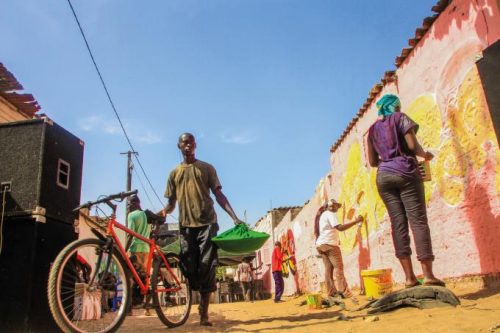 The neighbours of the Guinaw Rail Nord district, dress well to go to work and when they come to our neighbourhood, they take off their shoes and put on flip flops to pass through our area, and then they put on their shoes again when they leave. They are used to seeing rubbish here and are not bothered at all! But watching children playing among plastic and garbage is what shocks me the most!”, says Ina Thiam
So she took several unusual pictures of young models with strong make up, wearing expensive dresses and high heeled shoes and posing among rubbish and then showed the series to Senetopía, a project inspired by the book ‘Afrotopia’, by Senegalese publisher, writer, economist, professor and musician, Felwine Sarr. Ina Thiam, who is also known by her stage name as Ina Makosi (‘wisdom, in the Lingala language), is currently focused on the project ‘Les Ailes du Sport’, which means ‘The Wings of Sport’. “I photograph young girls who dedicate themselves to non-traditional sports disciplines for women, like Senegalese boxing or rugby”. With regard to photos, the young artist says, “a photographer must make feel the people who are posing at ease and gain their confidence. A photographer’s photos do not only ‘speak’ about people or images they portray, but they ‘speak’ about the photographers themselves. Pictures can capture the personality of both: the one who is in front of a camera and the one who is behind it”.
“I succeeded in entering into a world of men like that of hip-hop and I dedicated myself to photography in protest, because I was not supposed to do it, because I was a woman. I know that other girls have to fight against these sort of prejudices, and if being a feminist is setting an example and showing them that women can do what they want, then yes, I am a feminist!”, she says. 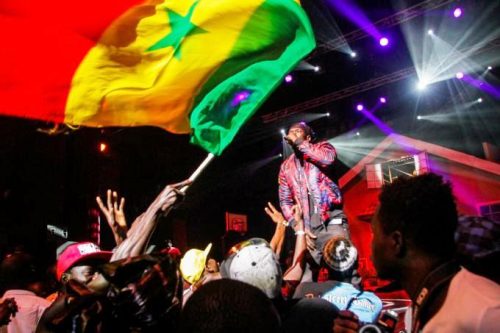 Ina Thiam, who covers both documentary and artistic photography, likes challenges and has also worked for ‘Plan International’, a development and humanitarian organisation, accepting to operate in difficult realities such as the one in Central African Republic.
The young Senegalese photographer has recently engaged with self-portraits. “We must be proud of who we are. I also say it as an African. I like to demonstrate that I am not a person with a a passive personality, that I do not ask for help, because I can manage by myself. I am someone who protests, who fights and that is what I try to communicate through my photos. One must work hard to get what one wants. I am proud of living in the Pikine district, of being African, and I am proud of fighting for myself and my people”.