A year after the youth protests that shook the most populated country of Africa. The justice and peace commissions are not functioning except in Lagos; the youth are disillusioned; the police are licking their wounds; insecurity has increased. The government is still
afraid of Twitter.

On 8 October 2020, a peaceful protest began in Nigeria called End SARS. It was prevalently a youth movement that broke out in many cities of the country around the same time. Especially in Lagos, the commercial and economic centre par excellence. The initial objective was to induce the government of President Muhammad Buhari to disband the infamous police unit known as the Special Anti-Robbery Squad (SARS). 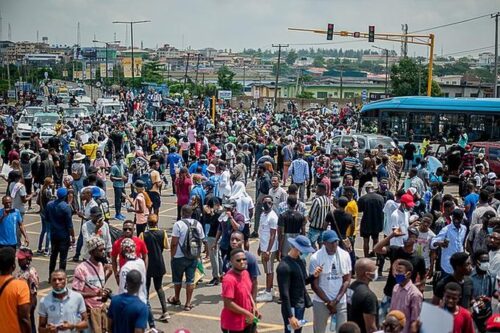 Protesters at the endSARS in Lagos. Photo: CC BY-SA 4.0/Kaizenify

The unit had a long history of abuse of power: it had been accused of brutality against citizens all over the country. The youth protest then raised the bar by demanding that those in power carry out a total reform of the police, an end to misgovernment and the payment of damages to victims of brutality for the forces of law and order. Even before taking to the streets, the End SARS movement exploded on Twitter. Its hashtag was adopted and spread by the Afro-pop icons, by political (Joe Biden) and economic personalities and the delegate administrator of Twitter (Jack Dorsey) and then retransmitted by the greatest international influencers. In October of last year, #EndSARS was for two days the most shared hashtag in the world.

A tragic end
However, what was described as one of the best organised and peaceful protests ever seen in Nigeria ended in tragedy. On 20 October 2020, a military ambush at the motorway toll booth at Lekki, in the north of Lagos, left dozens of fatalities and injured. What is now known internationally as the massacre of Lekki subsequently caused the total breakdown of social rules with Nigerian cities and towns attacked, plundered, and destroyed. It is interesting to note how quickly the Lagos administration denied any involvement. After the event, they quickly denied the presence of soldiers at the scene. 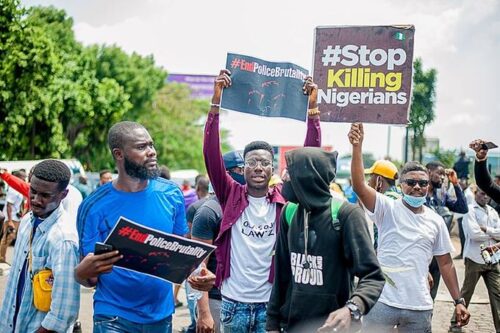 Protesters at the endSARS in Lagos. Photo: CC BY-SA 4.0/ Kaizenify.

A few days later, they made a u-turn, saying that the soldiers had not fired on the demonstrators. They ended up with “no comment”. President Buhari himself seemed reluctant to comment, taking several days before speaking to the nation to explain what happened. Just one month after the massacre of Lekki, the Nigerian authorities began to oppress the leaders and organisers of the End SARS protests. They accused important supporters of financing terrorism, suspended the bank accounts of some of them on foot of a court order obtained by the Nigerian Central Bank. Furthermore, they penalised the newspapers and communication agencies, accusing them of publishing exaggerated and inexact news.

The impact lives on
Today, a year on from the mass mobilisation, the impact of those demonstrations and their suppression lives on in the country. The federal government has tried to respond to the demands from the grassroots. The first thing it did was to disband the SARS (for the fourth time in five years). It then promised justice and fair compensation for the victims of violence. Enquiries were instigated in the states involved. However, most of the demands have yet to be met.
The administration of the state of Lagos, the epicentre of the clashes, has been concretely involved. 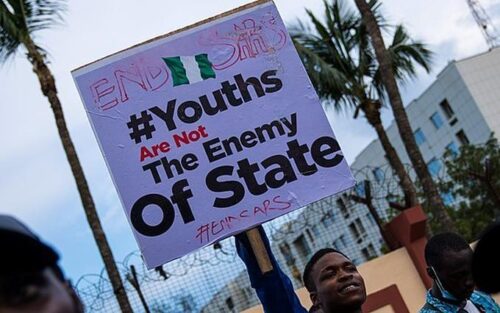 The governor, Babajide Sanwo-Olu, inaugurated the commission on 27 October 2020. According to Doris Akuwobi, president of the same commission, the number of victims of police brutality they heard during their meetings was over 100. Other persons were also heard such as key actors in the Lekki massacre such as high-ranking officers of the army and the director-general of the Lekki Conservation Centre (LCC), Abayomi Omomuwa. In the meantime, the concern of Sanwo-Olu and his colleagues has been to compensate as well, and as soon as possible, the victims of violence: usually, not more than two days after sentence
is pronounced.

Rebuilding
In the long wake of the blood-letting and violence following 20 October 2020, some cities have become ghost towns and derelict, with enormous economic damage. Lagos was the worst-hit area. The governor was said to have been gravely upset by the level of devastation. He told how more than a hundred police stations were destroyed or burned as well as the High Court and the taxation offices. According to the president of the House of Representatives, Femi Gbajabiamila, the amount of damage caused is estimated to be in the region of 2.5 billion dollars. To assist in reconstruction efforts, Sanwo-Olu has instituted the Lagos State Rebuilding Trust Fund, a trust fund of the state of Lagos.

Insecurity
One of the worst consequences following the post-End SARS demonstrations is the total lack of confidence in the forces of law and order. The local press says that after the massacre of Lekki, in Lagos state alone, 22 policemen were killed and 42 in the whole of Nigeria. The number of police stations destroyed in the country is estimated at 350. Many arms have been stolen. 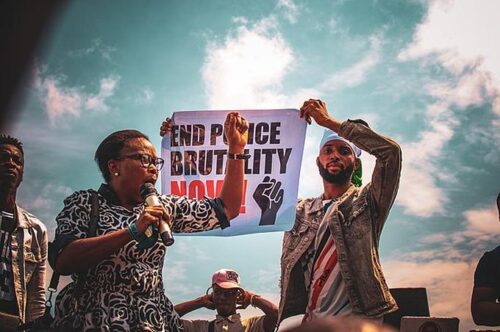 The attack on the police has led to the resignation of some officers. Many roadblocks, stop and search activities, and routine patrols have been suspended. This situation has created a security vacuum with an increase in armed robberies, auto theft, kidnappings, and murders. The recent episodes of violence in the south and south-east of the country are considered an offshoot of the End SARS demonstrations. Together with this increase in criminality, there is the failure of the government to oppose bandits and terrorists.

The youth and the social media
The arrogance of the government, together with its lack of empathy towards the victims of the massacre of Lekki, has seriously wounded the psyche and morale of many young Nigerians who were formerly optimistic that the protest would gain a series of political results. There is a growing lack of confidence.
The hoped-for second wave of End SARS has been a failure: many young people now live far from the gathering points. 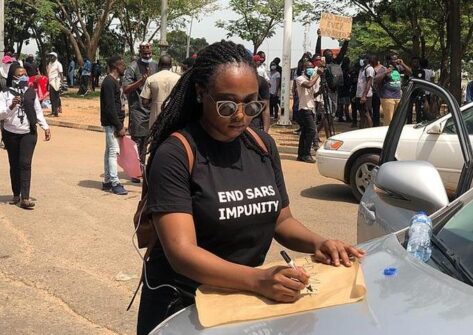 Many electoral polls were ignored as if those young people who asked for change were now reluctant to seek it by means of their polling cards. They are taking refuge in the social media, especially Twitter. And the response of the government? On 4 June, it indefinitely suspended this platform, inviting the audio-visual media to cancel its account as a ‘patriotic’ gesture, something that completely disturbed Nigeria. The social media had cancelled a tweet by the president in which he threatened to use violence against the Biafra separatist groups.
The government had accused them of interference in the affairs of the state, also referring to the little bird that chirps at the End SARS demonstrations.
More than 120 million Nigerians have access to the internet and almost 20% of them, about 40 million people, say they have a Twitter account, according to the NOI Polls Society for statistical research, based in Lagos. Clearly,
End SARS causes fear even today, even though the young people no longer take to the streets. Open Photo: Protest against the Special Anti-Robbery Squad (SARS) in Lagos. CC BY-SA 4.0/TobiJamesCandids