The feast of Timket or Baptism of the Lord is celebrated in Ethiopia on January 19, 12 days after Christmas. An original feature with regard to this celebration is that in Ethiopia the Old and New Testaments are combined, since, in addition to commemorating the baptism of Jesus, the Ark of the Covenant or Tabot is also venerated. We can even say that it is the true protagonist of the celebration.

To explain this peculiarity, it is necessary to refer to a deeply rooted Ethiopian legend, still held today as undoubtedly historical in the circles of the Orthodox Church. According to it, the so called Queen of Sheba, who went to Jerusalem to admire the wisdom of Solomon (1 Kings 10: 1-10), was none other than the queen of Ethiopia, who, after her visit to the Jewish king, returned to her land pregnant and gave birth to a son named Menelik I. When he grew up, he wanted to meet his father and made a visit to Jerusalem, where he returned bringing with him the Ark of the Covenant, which he removed from the temple of Jerusalem, replacing it with a fake one. After many vicissitudes, the legend states that the ark was deposited in the city of Axum, where it is still preserved in a chapel near the main church. The ark or Tabot is the most sacred object that the Orthodox Church venerates. Every church has a Tabot, that is, a chest containing the tablets made of wood or stone, which are blessed by the Patriarch and placed in the Holy of Holies, the innermost compartment of the church. 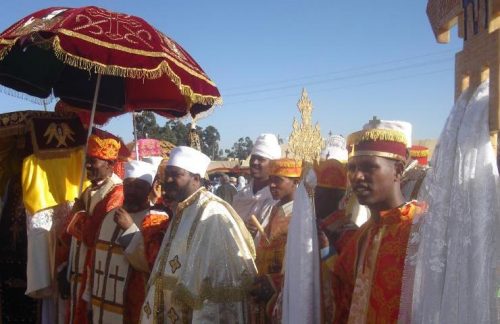 The feast of Timket begins on the eve with the departure of the Tabots of each church to a place where there is abundant water. Around noon, groups of people of all ages begin to take to the streets. Most wear the national dress.  Women wear white dresses, embroidered with crosses and men the gabí or shawl, this one also invariably white. Choirs are formed singing and dancing around a drummer. Generally, they sing church chants, but there are many dances that have little or nothing to do with the sacred. There is also room for traditional dances and for spontaneous dancers who take the opportunity to show their talents. 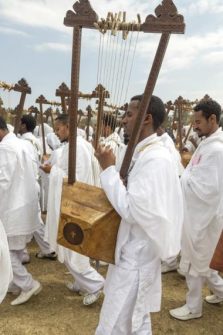 Towards three o’clock in the afternoon, a group of priests dressed in multi-coloured sacred ornaments and under multi-coloured umbrellas appear at the door of the church. One of them has a particularly hieratic posture and carries on his head a flat object wrapped in rich linen cloths. This is the Tabot. At that moment, a concert of screams and ululations commences. When it calms down, the procession begins its journey to the place where the Tabots of several nearby churches will be gathered. The route can be long, up to five km. or more. All the way, the crowd accompanies the procession with their songs and dances. Once they reach the appointed place, the Tabots are placed inside a large tent, sheltered from the public eye. Songs, sermons, prayers, bustling … will continue well into the night.
In the early morning on the day of the feast, the priests celebrate the Eucharist inside the tent. Then they approach the place of the water which may be a river or pond, bless it and sprinkle the crowd, who will be happy if their clothes are completely soaked.
After that moment, where it is possible, everyone throws themselves into the water, splashing each other, swimming …. Mothers like to immerse their babies in the water. 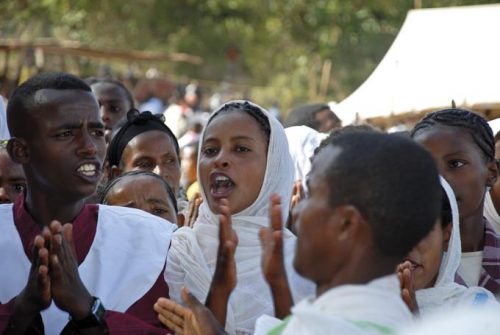 Towards the middle of the morning, when the water pandemonium ends, the return of the Tabots to their respective churches begins, accompanied by the crowd who continue to sing and dance. Upon arrival, a particularly solemn dance takes place, performed by priests, deacons or singers. These stand in two rows facing each other. In their right hand they hold the sistrum and in the left the makomia, a long stick with which they mark the rhythm. One or two drummers rotate in the  middle between the two rows. The intensity goes on growing until reaching a peak moment after which the dance concludes.
It is the so-called dance of David and recalls the passage of the Bible (2Sam 6, 12-15) which describes the transfer of the ark to the city of David, while he danced in front of it.
There are cities especially famous for the celebration of Timket to which thousands of pilgrims come from other parts of the nation. Axum, Gondar and Addis Ababa are the main ones, partly because of the suggestive scenery where the celebration takes place. At Axum, it is celebrated in the Mai Shum (Water of the Chief), a very big pond excavated in the rock, in which tradition says the Queen of Sheba came to bathe. At Gondar, Timket is celebrated in the Baths of Fasil, the pool that King Fasil built for himself in which to bathe. 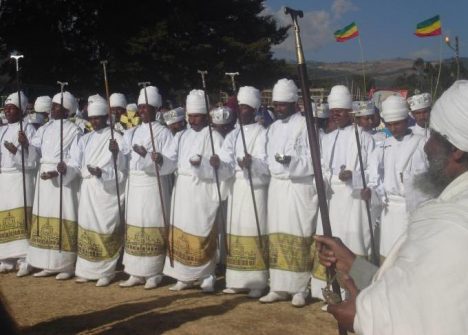 Currently, the pool is filled only for the Timket feast. Addis Ababa is a city too big for the Tabots of its 250 churches to be concentrated in one place. But there is a privileged scenario where the celebration acquires special solemnity and where the Patriarch usually goes. It is the Jan Mieda or Field of His Majesty, a huge esplanade to the east of the city, which Emperor Menelik II (1889-1913) used as a racetrack and as a landing field for the first airplanes that flew in Ethiopia. As there is no river or pond in the esplanade, a small pool of cement and tiles was built, surrounded by a fence.
Within it, the priests can perform the liturgical functions in an orderly fashion without being pressed by the crowd.
Both the Tabot and all the ritual that surrounds the feast of Timket speak of the great influence of the Old Testament in the life and liturgy of the Ethiopian Orthodox Church.
And whatever the explanation of this phenomenon may be, it is necessary to admit a strong Jewish presence prior to the arrival of Christianity. When this came, it assumed much of what in the religious field was already being practiced. This explains the combination, in the Timket feast, of two sacred events that apparently have nothing to do with each other.