The slums of Katwe have seen the birth of a new circus where the jugglers, acrobats, fire-eaters and dancers are the youngsters themselves of the shanty town. They have become so skilled that they have been asked to perform even outside the continent of Africa. For many of them it has become a profession.

The youngest is a boy of nine. When school is over he rushes home, removes his school uniform, changes into his shorts and goes to do his daily training of three or four hours a day, every day: bends, somersaults, juggling and various acrobatic routines, both alone and with his team mates. This unusual team consists of 150 boys and girls called: The Acrobatics Circus Troupe of Katwe. Katwe is in Kampala, the capital of Uganda. Katwe is not just an ordinary place and neither are these boys and girls just ordinary boys and girls. 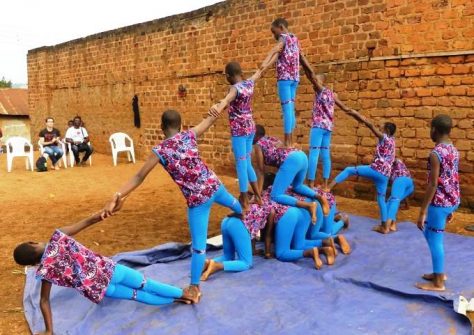 Katwe is a slum, believed to be the biggest in the city and, as in all such places, living conditions are harsh: poverty, the lack of basic services, social marginalisation, low school attendance rates and a high percentage of underage mothers. Out of a population of nine thousand people, a high proportion are children; of those of working age, at least 75% are either unemployed or eke out a living day by day (the area has the highest crime rate of the capital). But there is plenty of energy, determination and creativity. It is no accident that Katwe in Luganda, the local language, means ‘intelligent’.
At the time of independence in 1962, this district – it had not yet become a slum – was known for the skills of the craftsmen working there, experts in repairing electrical domestic appliances, televisions or cars. With the passage of time, the area became a place of refuge – an improvised home – for people without hope, with no work and even fewer prospects for the future. 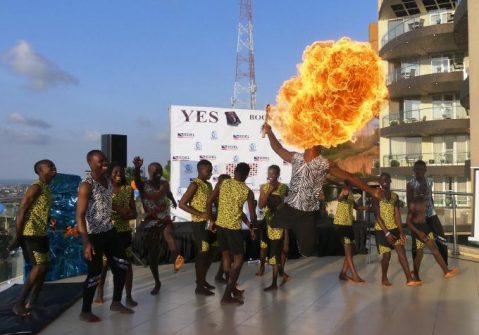 Every time there is an outbreak of protests or signs of a revolt, it is to this place that the forces of law and order come; here the police search for arms and those responsible for the crimes committed in the city. And it is here that low-cost drugs are circulated. As a matter of fact, all one has to do is to wander through the shanty houses to see people, in broad daylight, chewing qat, ‘the drug of the poor’, called mira in the local language.

Building a future
This is also the place where scores of young people are using their creativity to carve out a future for themselves. The idea of starting a circus was the brain-child of Richard Walusimbi. Orphaned at the age of seven when his parents died of AIDS, he first lived on the streets but went to school and even to university, thanks to the help given him by people who believed in him. Nevertheless, he continued to live in the slum and one day he decided to try and put to good use all that energy and natural talent he observed every day in the young people of the community. That is how the circus came into being with its jugglers, acrobats, fire-eaters and dancers.
To their natural talent they added discipline and study. Techniques were learned from downloaded YouTube videos and from books either borrowed or donated. The team gradually became well known and invitations to perform at demonstrations and events were frequent, as well as opportunities to train with experts such as the celebrated Zurcaroh Acrobatic Group, directed by the Brazilian choreographer Peterson da Cruz Hora. 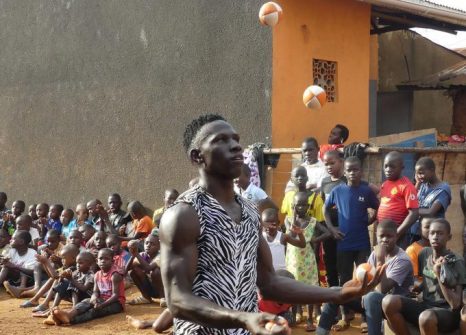 They were invited to festivals in Uganda, Benin, Ivory Coast and South Africa. Many of these young people have been to China, working for some months in circus structures or amusement parks. Under the terms of their contract they are given board and lodging, one day off per week and four hundred dollars per month. They save their money and, on their return home, start an activity or continue their schooling. It is inevitable that this experience of working abroad, so far from home, should cause some unease. “Not everyone is friendly towards us; they think we still live in trees and some refuse even to shake our hands”, one of the jugglers of the group tells us. “This does not bother me. We meet many other young people from Brazil or from Europe engaged in the same work as ourselves. While we are together we share everything including techniques and ideas to improve our performances”, he adds.

Combating poverty
The common aim of the founders of the circus is to combat poverty and give these young people an opportunity to carve out a future for themselves with their own hands using their own talents.
Whenever these young people gather to practice in the large space between the huts of mud walls and iron sheets, small groups of spectators gather to watch. There is always a youngster or two who approach the leaders asking to join the group. “Ever since I joined the circus – recounts Marion, 18 – I always knew I would succeed. I pay my own school fees and after school I am always busy training. If I did not have my art and the possibility of exercising it, I should be just like other girls with nothing better to look forward to than ‘those’ girls have”. She is alluding to the fact that, if a girl from a slum fails to find work as a waitress, she will end up as a prostitute. She is well aware of it. This circus has substituted an uncertain future with one of hope and the confusion of a life without a goal with discipline and daily commitment. 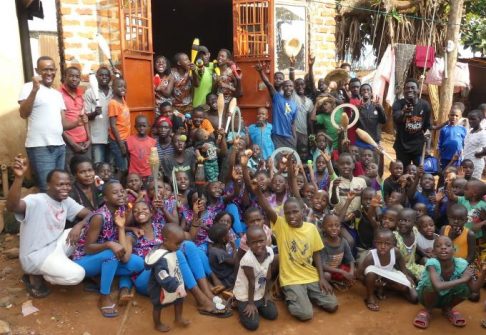 Most importantly, it is because they see results that these young people forge ahead. When one of their companions leaves, they greet them with joy at their success, knowing that their turn may come soon. Here everybody knows the story of Phiona Mutesi, a chess expert who grew up right there in Katwe shanty town. The Disney company made a film, ‘The Queen of Katwe’, based on her life. Phiona is an example that continues to fuel the imagination of children who grow up deprived, in the shadow of the iron sheets and among the stench of open drains. A few years ago, Oxford University published the results of a study showing how groups of students who, a month before the exams had watched a film about the chess champion received better marks than those who had watched a ‘placebo film’ on the life of children with supernatural powers. What does this show? That the positive example of one who succeeded, despite difficult conditions, stimulates self-confidence and self-esteem. This is what the young people of Katwe are doing: creating positive examples for their companions and the whole community. And this is a community that has developed respect and confidence in these young people of whom they are so very proud.