After thirty eight years of impunity, the process of identifying the assassins and those who sent them is reopened. People again speak of the “Argentine Connection”.

Some days before the canonisation which took place on 14 October in Rome, a march was held ending in front of the Palace of Justice in San Salvador. The marchers were demanding the speeding up of the case against the material and intellectual authors of the assassination of Monsignor Romero, people who are still hidden in the shadows after 38 years. The timing of the demands for judicial truth was well chosen, coinciding with the canonisation of Romero and coming soon after the decision finally to reopen the investigation   on 12 May, 2017, assigning its leadership Criminal Prosecution Judge Rigoberto Chicas, a judge who is well known in El Salvador for having sentenced to prison for corruption Antonio Saca, who was their president from 2004 to 2009. “He is a serious person and we are confident the case will go ahead” comments Ovidio Mauricio Gonzalez, of Tutela Legale (Legal Protection), the historical institution founded in 1977 by Archbishop Romero with the title of Juridical Assistance. 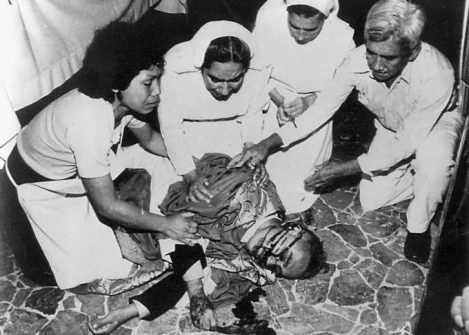 Archbishop Oscar Romero, a few minutes after being shot dead, on 24 March 1980.

It is difficult to see how, after almost four decades, not one of the guilty persons who took part in this crime has been brought before the courts, or, worse still, that no investigation has yet taken place whose results can be trusted. But this is precisely how things are. Romero is also the victim of the peace he wanted for his tormented country since the agreements that disarmed the guerrillas in Salvador in 1992 led the conflicting parties to ignore the atrocities committed, leaving them behind in favour of a future agreement that finally seemed within reach.
The amnesty decreed by Alfredo Cristiani, the president of Arena, the party in power, in March 1993 brought an end to hundreds of prosecutions already under way in the courts and halted the avalanche of cases that would have been brought with the new democracy. The Truth Commission alone, in its short term of existence, considered more than two thousand cases, 80,000 victims of the war and 10,000 disappeared, the legacy of the conflict. 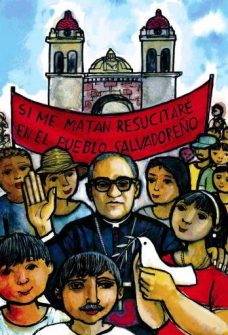 “If they kill me, I will rise again in the people of El Salvador”

Finally, the amnesty law was declared unconstitutional and repealed on 13 July 2016, opening the way for prosecutions, including cases already under amnesty.
Ovidio Mauricio Gonzalez, who, among other things, certified the transfer of Romero’s remains from the old to the new tomb by due canonical oath on 11 March 2015, has stated that he is happy with the reopening and with the person responsible for the case. In his office full of files he showed us each one of the eleven volumes each of two hundred pages or more, recently deposited with the new prosecuting judge. They contain reconstructions, statements, testimonies, newspaper articles, minutes, maps, also names and identikits such as that of the alleged assassin, tall, slim, with sharp features, a moustache and a beard and so described my other members of the death squad. These amount to a very valuable basis for indictment that confirms or integrates other works such as the report of the Truth Commission that gathered particularly conclusive items, or that of the Inter-American Commission for Human Rights which studied the evidence and the great volume of work collected for the civil case brought in Fresno, California, against the former Captain Álvaro Saravia which ruled that he pay damages amounting to ten million dollars and led the judge to write in the sentence that there truly existed a death squad and that it was commanded by Major Roberto D’Aubuisson. When asked if the material collected by the Truth Commission would be sufficient to bring to justice and convict D’Aubuisson, the main suspect of the assassination, an important assessor of the Commission, the American Douglas Cassel, a Harvard doctor at law, replied without hesitation: “If this were brought before a court, I would say that the case would end in a conviction. None of the commissioners and none of the three consultants had the least doubt about the outcome because we interviewed key witnesses who knew what had happened”.

The Argentine daily La Nación published on 14 March 2018 an interview with the younger sister of D’Abuisson, Marisa de Martínez, entitled “My brother, the killer of Monsignor Oscar Romero”. The woman, who is a social assistant and very active in the base communities of Salvador, speaks of her visit to the hospice where her brother was a patient just a day before he died. It was the last time she saw him alive and she said to him on that occasion: «”You must die in peace. I beg you, entrust yourself to Romero asking him from the depths of your heart to forgive you”. He opened his eyes for a moment and drew her close to himself, face to face and, unable to speak because of his sickness, he began to weep”.Before leaving for Rome for the canonisation, Marisa D’Abuisson de Martínez was interviewed by the daily El Faro which published it on Saturday 13 October, the vigil of the canonisation of Monsignor Romero. Asked if she had any doubts about the participation of her brother in the assassination, she replied: «Unfortunately … from what Roberto was saying about Monsignor, and the notebook that was found [the so-called  “Agenda Saravia”] with its details, I think he joined that organisation, so to speak, which was set up to see how Romero could be definitively disposed of. And, of course, his last sermon may have persuaded those who still had some doubts”. 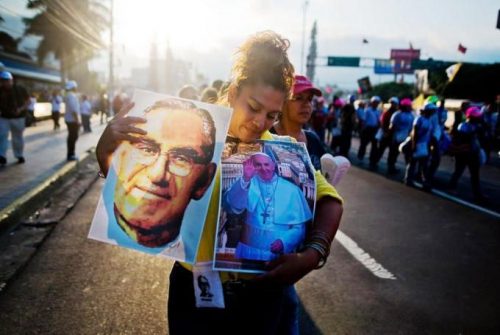 “According to the results of the Truth Commission, the organisation chart of those responsible for the assassination of Romero led to a death squad organised by D’Abuisson and financed by the so-called Miami group composed of important families who emigrated to the United States” adds the lawyer Mauricio Gonzalez: “Capitan Álvaro Saravia was in charge of the funds, the treasurer; the driver is known; other names are known even though the precise role of each one in the operation is not; it is not known for certain who pulled the trigger though there are suspects”. On the eve of the canonisation, the Salvadoran Cardinal Gregorio Rosa Chávez again spoke of the “Argentina connection”, at least in so far as it refers to the training of the sniper who shot Romero on the afternoon of 24 March 1980. Rosa Chávez indicated “an Argentinian priest” as his source which spoke of “a school for the training of snipers” close to the city where he lived and to have known that the one who killed Romero came from there”. The Cardinal stated that, before the murder, the Apostolic Nuncio received a representative of the American embassy who revealed to him that: “Romero is in danger; please tell him that – perhaps – He will be assassinated next week”.
The secretary of the Vatican embassy in Buenos Aires then called the nuncio in Costa Rica, Lajos Kada, and he, in turn, called the Archbishop”. Rosa Chávez confirmed that in the diary which Romero used to keep also showed the connection with Argentina: “The Archbishop wrote in his diary: the nuncio called me and told me I may be assassinated next week. And he immediately offered his life”. Rosa Chávez continued:  «When I was Apostolic Administrator after the death of Archbishop Arturo Rivera y Damas, I wrote to the nuncio and questioned him on this point: “It is true, I informed Romero – he replied. – Therefore, we have concrete facts concerning the Argentina connection, even though we do not know the name of the assassin.” 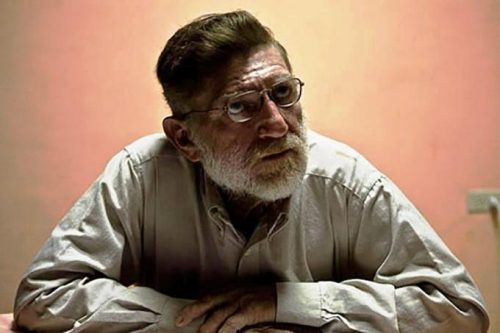 The name of former captain Álvaro Saravia recurs in almost all the reports that have been edited to date on the assassination of Monsignor Romero. In a ledger sequestered in a country house where a group of prominent right-wing men were gathered, there appear payments given to various agents of what was called  “Operation Pina”, a possible code name for the operation that ended in the killing of Monsignor Romero. The lawyer Mauricio Gonzalez clarified the matter: “The ledger shows that Saravia had asked for two vehicles, one for the sniper and the driver and a second for whoever was to supervise the action from outside”, as he showed us a photocopy of the page of the ledger with details of the payments made to the members of the command which, on 24 March 1980, took part in the assassination.
Cardinal Gregorio Rosa Chavez remembers that, in May 2015, former Captain “phoned me and said he wanted to clear his conscience, that he was writing a book on Romero and he needed to see me. I was not sure I ought to believe him. I asked him for proof and he sent me a messenger with a letter signed by him. Then something unexpected happened; a journalist intercepted him and Álvaro told him the whole story”.
That journalist was Carlos Dada, founder and director of the El Salvador on-line El Faro who, in an interview published under the title “How we killed Monsignor Romero” on 22 March 2010, declared that he took no part in planning the murder and that he did not know the sniper, though he did see him “get into the vehicle”, that he had a beard and that he “personally handed over to him one thousand Colones that D’Aubuisson had borrowed from Eduardo Lemus O´Byrne”. A couple of years before the assassination of Romero, D’Aubuisson founded the Arena Party (Nationalist republican Alliance) and became its head. He was also president of the constitutive Assembly of 1983 and a prominent member of the World Anti-Communist league. He died of throat cancer in 1992 at the age of 47, having brought the party to the presidency of El Salvador a short time before the signing of the Peace Agreement that put an end to the civil war in El Salvador. 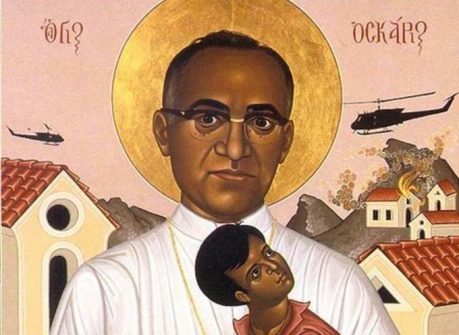 Even though some suspects are already dead and others have committed suicide, some witnesses have disappeared and despite various red herrings, the investigation into the assassination of the man declared a saint by Pope Francis can once again set out on the path towards the truth. This is because the Church – as Cardinal Rosa Chavez repeated recently – wants to forgive but the element of justice is the condition for pardon”.On October 23, a Salvadoran judge ordered the arrest of Alvaro Rafael Saravia.  Judge Rigoberto Chicas said there is sufficient evidence to charge Saravia for participating in Romero’s killing, and ordered the police and Interpol to search for him. Saravia’s wherabouts are unknown.