It has been documented in many folkloric and ethnobotanical studies conducted in east, central and southern Africa, in which the species is greatly used as one of the primary sources of traditional medicine. The specific epithet salutaris is Latin meaning ‘healthful’, referencing its medicinal properties. The common name, ‘pepper-bark tree’, relates to the pungent inner bark that tastes peppery. 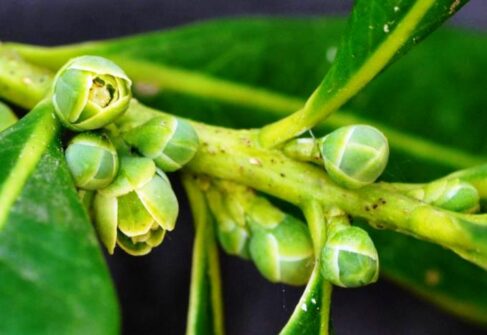 It is an endemic plant in sub-Saharan Africa in a number of countries including South Africa, Swaziland, Zimbabwe, Mozambique, Malawi and Zambia. Traditionally, extracts and products produced from the Warburgia salutaris species are regarded as important natural African antibiotics and have been used extensively as part of traditional healing practices for the treatment of fungal, bacterial and protozoal infections in both humans and animals.  It is an evergreen tree with a dense, rounded crown growing to about 5-10 metres in height, but can occasionally reach 20 metres. The stem is covered by a rich brown bark, marked with corky lenticels, that is also bitter and peppery. It has a thick canopy of aromatic, shiny green leaves. The evergreen leaf blades are lance-shaped, measuring up to 11 cm long by 3 wide. It has small, white to greenish flowers, up to 7 mm in diameter. The fruit is a berry, leathery purple or black in color when ripe, measuring up to 4 cm wide. 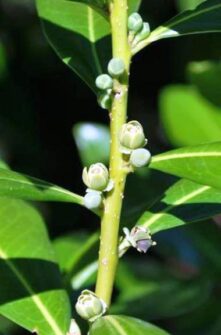 For centuries, the Warburgia salutaris (pepper bark) tree has been traditionally used to treat many varied disease conditions. It’s commonly harvested from the wild and widely sold in local markets for medicinal purposes. Medicinally, the pepper-like, bitter stems and root bark are used to cure many ailments in traditional medicine including cough, cold, bronchial infections, oral thrush, and cystitis among other ailments.
The stem bark is used to treat diseases such as malaria, stomach ulcers, and colds. The decoction prepared from the harvested root bark of the Warburgia salutaris tree is used to treat coughs and the leaves used to alleviate skin irritation. The inner bark has many uses as a treatment for chest pains, coughs, diarrhoea, muscle pains, and general body pains. The stem bark is also used in traditional medicine as an expectorant and smoked to alleviate coughs and colds. The stem bark powder is also topically applied for treatment and management of body sores and inflammation. The powdered stem bark is mixed with fat and applied externally as an ointment. 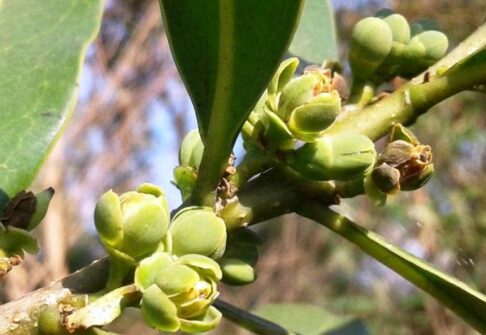 The stem and root bark are both taken as a remedy for malaria. Powdered and mixed with water, they are used as a cure for sores in the mouth. As an expectorant or smoked, the root bark is a widely used remedy for common colds.
Dried and ground, they make a snuff used to clear the sinuses. Taken orally they are believed to cure spots in the lungs.
In addition to the medicinal uses, some communities use the bitter, peppery, aromatic leaves of the pepper-bark to flavour food, and also to make tea. The wood is sometimes used in building. A resin can be extracted from the bark. The bark is also a source of tannins. Muzigadial, which is one of the major phytochemicals found in Warburgia salutaris, has been observed to possess a potent antibacterial activity. In some communities, Warburgia salutaris is grown as an ornamental hedge and in some cases used as a shade tree in plantations.
Warburgia salutaris is over-harvested in the wild for medicinal use and is popularly sold in the local markets throughout its distribution range. The plant has been classified as ‘Endangered’ in the International Union for Conservation of Nature (IUCN) Red List of Threatened Species (2011). In fact, the Pepper-Bark tree is already extinct in some areas, and considered critically endangered in some countries in southern Africa where the plant is endemic.