“With her powerful voice and unique style she succeeded in bringing together the treasures of traditional music and the electronic sounds of European pop-rock”.

For some time now, Yasmine has lived in multi-ethnic Paris but she has lived and criss-crossed many cities and cultures in her life of forty three years. It started in Beirut where she was born in 1976, just when the Lebanese capital was in the grip of a terrible civil war that would drag on until 1990. In that troubled “Switzerland of the Middle East” little Yasmine grew up and developed her love for music until, together with singer/producer Zeid Hamdan (no relation), she started the Soapkills project which released its first record in 1999, an album entitled Bater.
Immediately the duo became one of the most important units in the world of the new electronic pop music in the Middle East. 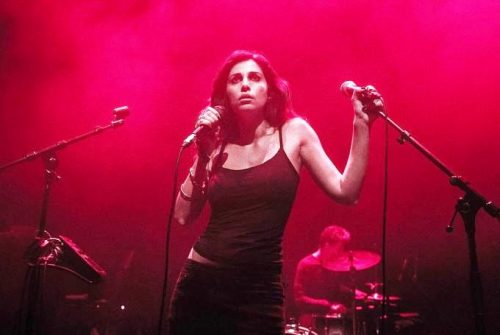 With her powerful voice and unique style she succeeded in bringing together the treasures of traditional music and the electronic sounds of European pop-rock. Restless, curious and with a vagabond spirit, she went to live in different countries from Kuwait to Abu Dhabi, from Greece to Paris where she now lives; her encounter/collaboration with eclectic producer Mirwais (who produced some of Madonna’s work) added even greater stimulus to her explosive creativity.
The turning point came in 2013, thanks to a Belgian label specialising in world-music, which launched her first solo record on all the main European markets: an enchanting album entitled Ya Nass. 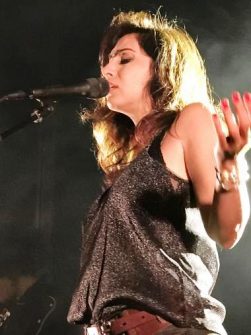 The product found the perfect balance between the modern and the traditional, constructed on a continual overlapping of different folk languages, sung in various Arabic languages, including Bedouin, but given substance and filled with cosmopolitan suggestions that soon transformed Yasmine Hamdan into an icon of the underground European scene.
Married to Palestinian producer Elia Suleiman, volcanic Yasmine is also an actress (her part in a film by Jim Jar-mush comes to mind) and composer of soundtracks , also for the theatre. 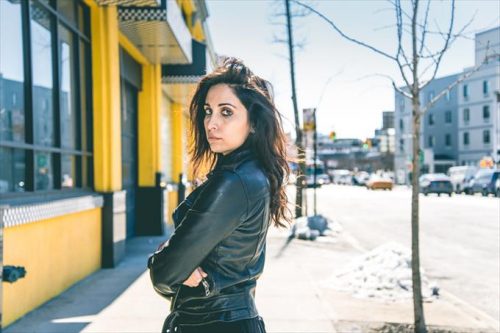 She never forgets her roots: «I love Arabic culture and I hate how the Arabic world is portrayed by the modern press – she declared during a recent interview at the New York Times – I sing in Arabic to emphasise this: it is both an art and a challenge».
In 2017 Hamdan completed her second solo album, Al Jamilat — which we may translate as “All Things Beautiful”. With this disc the Lebanese singer continues her musical exploration with the help of noted producers like Englishman Luke Smith and highly talented musicians like Pakistani American Shahzad Ismaily and Sonic Youth member Steve Shelley: both skilled in experimentation in the wide ocean of modern pop. The same can be said for her songs which, even though not entirely “political” are riddled with references to current social conditions, including those of the Middle East as it continues its search
for better times.