A small community that lives its faith through testimony. One of the great challenges is the dialogue with Muslims.

This landlocked country is mainly mountainous, the Tien Shan and Pamir ranges occupy 65% of its territory. Kyrgyzstan borders the Chinese province of Xinjiang to the east, Kazakhstan to the north, Uzbekistan to the west and Tajikistan to the south. The country is home to about six million people – 80% Muslim and 16% Orthodox – made up of multiple ethnic groups including the Kyrgyzians (about 64.7% and descendants of the tribes that settled in ancient times on the Tian Shan); Uzbeks (14.5%); Russians (12.5%); and several other groups, much less relevant in numerical terms, such as Uighurs, Dungans, Ukrainians, Tartars, and even Germans whose ancestors were deported in the Second World War from the Polish Ukrainian regions conquered by the Soviet Union.
Kyrgyzstan is one of the poorest countries in Central Asia with over 40% of the population living below the poverty line. Its economy is based above all on agro-pastoral activities and on mineral resources such as gold, uranium, oil and antimony. Kyrgyzstan also has significant coal reserves (estimated at about 2.5 billion tons) which are mainly located in the Kara-Keche field in the north of the country. 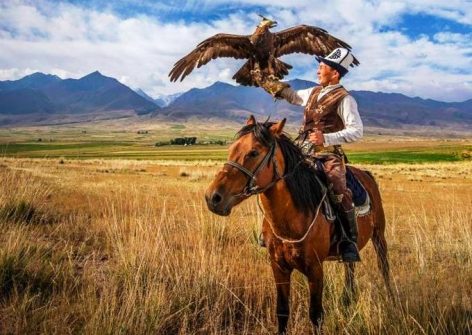 The country, whose capital is Bishkek (located on the plain near the border with Kazakhstan) became independent from the Soviet Union in August 1991.The Kyrgyz people are an ethnic group of Turkish origin and make up the majority of Kyrgyzstan’s population. Traditionally nomads, thanks to their tenacity, they have been able to adapt themselves to the inhospitable land and difficult environmental conditions of the country. The high peaks of the Kyrgyz Mountains still host itinerant villages characterized by yurts, the shepherds’ tents. Yurts are at the centre of the life of clans, they are the place of hospitality for foreigners, they are the place for sharing meals and meeting moments during which traditional songs are accompanied by komuzy, the most popular stringed instrument in the country. 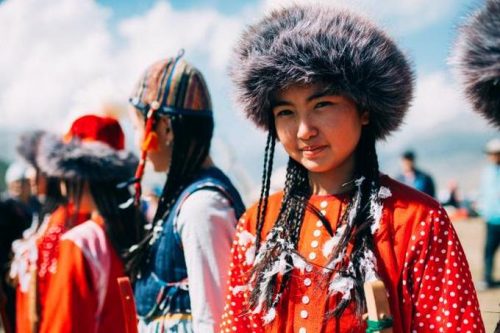 The Kyrgyz people eat simple meals based on rice, meat and vegetables often accompanied by jusai, a mountain herb, and boorsok, a kind of bread. The Kyrgyz cuisine also includes the use of honey and jams, while kymyz, fermented milk, is the most popular drink.
Their diversions, sports and competitions such as horse riding, hunting, and archery, are clearly rooted in the traditions of their nomadic life.
A profound sense of hospitality has always been one of the most characteristic traits of the Kyrgyz people. Their literary heritage includes the Manas epic which is one of the world’s greatest oral poems and the pinnacle of the Central Asian oral tradition. It depicts the history of the Kyrgyz people and all their myths, tales and legends, and is their greatest cultural treasure, offering moral and spiritual guidance throughout the ages. This collection of myths, folklore and legends, which is composed of over a million verses, is about the warrior-hero Manas and his successors, and it reflects Kyrgyzstan’s nomadic past, beset by enemies and constant battles. Its theme of the struggle for freedom still resonates powerfully with the Kyrgyz today.

The Catholic Church
The first Catholics arrived in Kyrgyzstan in the late 19th century, in the Fergana valley, in Osh, one of the largest and oldest cities, founded three thousand years before Christ. They were 15% of all European inhabitants; since 1918 to 1930, the area of Kyrgyzstan came under the parish of Tashkent. The number of Catholics increased following the repression of the Germans and Poles of the Volga, tens of thousands of Catholics were deported to Kyrgyzstan: Catholics were mainly Germans and Poles but there were also some from the Baltic States and Koreans from the Far East.Until the mid-fifties of the last century, Catholics in Kyrgyzstan professed their religion clandestinely and without priests, because in that period most of the priests had been sent to gulags. 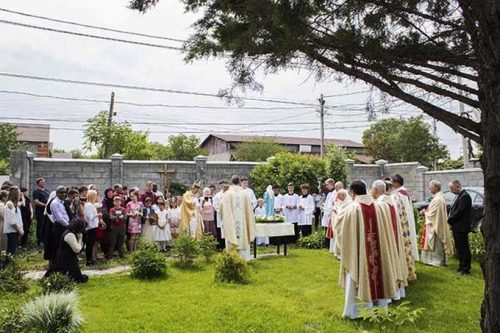 In 1997, the Holy See established the Mission sui iuris of Kyrgyzstan. In 2006, it was raised to an Apostolic Administration and Nikolaus Messmer was named the country’s first Catholic bishop. In 2017, the former superior of the Russian Jesuit region, Fr. Anthony Corcoran, was installed as Apostolic Administrator of the Catholic Church in Kyrgyzstan.“The Catholic Church in Kyrgyzstan has experienced great changes throughout history: present in the country for at least 150 years, the Catholic community has traditionally been made up of German, Polish and Ukrainian citizens. For decades these people professed Christianity clandestinely, under the persecutions of the Soviet regime. Despite this, their faith survived”, says Father Corcoran.
The Texan Jesuit was appointed by Pope Francis as Apostolic Administrator of Kyrgyzstan in 2017, after serving for twenty years in Russia and some years in Siberia. “I remember that when I arrived in this country, I used to ask people what being Catholic meant to them, and though each person gave me different answers, there were three elements in common: one was the sign of the cross and when they showed it to me, I could see so much devotion in that gesture! A second element was that everyone knew something about Jesus, about his birth, death and resurrection and His new coming in glory. And the third thing was the rosary: even though many of them had never had one, they prayed the rosary.”
” Many of them had never met a priest, nevertheless they prayed because they had inherited the legacy of a ‘faith handed over by their grandparents’”, the Jesuit explains. “Between 1990 and 2000, many Catholics left. At the moment I think there are between 600 and 1,500 Catholics scattered throughout the country”, adds Father Corcoran. 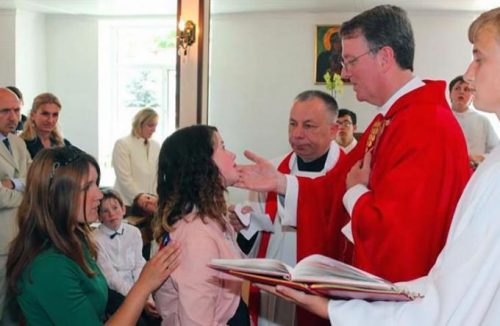 Father Anthony Corcoran presides at a confirmation in Bishkek cathedral.

Today Kyrgyzstan is a small country with a population of almost six million inhabitants. Islam is the most widely held faith. “According to official sources, about 87-90% of the population is Muslim. The Orthodox represent 8-11% of the total, and the other Christian denominations are a very small minority. Despite this, we are able to work freely, because the constitution of Kyrgyzstan guarantees freedom of religion. Obviously some people are more open to welcoming, others less. An event that has impressed this part of the world greatly was the Pope’s trip to the United Arab Emirates, because the circumstance got media coverage and it was considered a sign of great respect by the Church towards Islam”, says Fr. Corcoran.
One of the great challenges facing Christians is dialogue with Muslims. “In Kyrgyzstan there are more opportunities than in other countries to enter into dialogue with Muslims: with Turkish students; with the Uyghurs from eastern Turkestan in China; with the Kyrgyz and the Uzbeks themselves, much more than in Russia, where they arrive as foreign workers and live secluded in their small communities. Dialogue is an opportunity we must not miss”, comments Father Corcoran. “In the country there are three parishes: one in Bishkek; one in Talas in the west of the region, and one in Zalabad in the south. There are also many small Catholic communities scattered throughout the rural areas of the country. Local Catholics can rely on the spiritual assistance of seven priests, one religious and five Franciscan nuns. 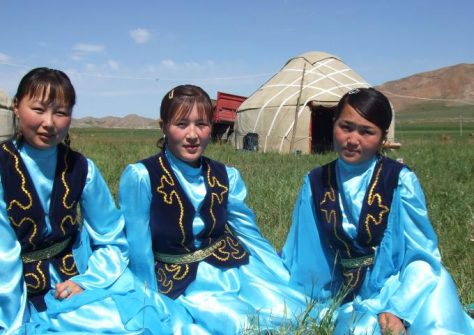 The Kyrgyz Caritas owes its origins to the creation, in 2011, of the Non-Governmental Organization ‘Light of Love’: the decision to embark on the path of integration of the NGO in the pastoral and charitable organization of the Bishops was born following the participation of a meeting organized by Caritas Asia in 2014 in Almaty.
One of the most significant projects is the Issyk Centre, the home for disabled and poor Kyrgyz children, located on the shores of Lake Issyk-kul and managed by the religious of the Society of Jesus. The centre not only helps needy children but also offers support to needy families. The activities of the Issyk Centre take place mainly in the summer, when camps are set up for disabled children, orphans and the poor, often carried out in collaboration with Kyrgyz social assistance facilities.
Father Corcoran explains what being a Christian in a minority context means. “As representatives of the Church we are called to be among the people. Being a priest in this small community is like a challenge to me. The challenge of being able to support and make people develop, grow, flourish. I think that my testimony is a sign that, through me, the Church takes care of these small communities”. (C.C.)