The Buganda are a bantu speaking ethnic group found in Uganda. They are a very dominant group and account for 17% of the country’s population of 34.6 million people. The present day Buganda was known as Muwaawa and this was because it was believed to be a sparsely populated area before the 12th century.

They speak Luganda which is a very widely spoken language in Uganda. There are so many myths that describe the origin of the Baganda people and Buganda but the most common and accepted myth is the one that tells of the migration from Abyssinia in Ethiopia through the Great Rift Valley and Mount Elgon in the eastern part of the country until they reached the present day location. 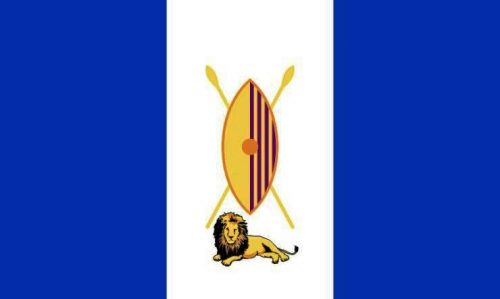 The flag of the Buganda kingdom.

These people were organised in groups which were clans who had a common ancestry and constituted the most important unit in Buganda. These clans were headed by clan leaders who would be a chief and ruled a section of the clan territory.

Clans and Totems
Buganda had five original clans which were Ffumbe, Lugave, Ngonge, Njaza and Nyoni. At a later stage, these clans would expand to 52 clans by 1966. The heads of these clans where known as the Bbaataka and leadership was passed on to whoever proved his might in battle.
When Kintu took over as king of Buganda, he found Buganda so disorganised with only five clans. It is believed that he organised the people and merged them with the people he came with, and together they formed thirteen clans. 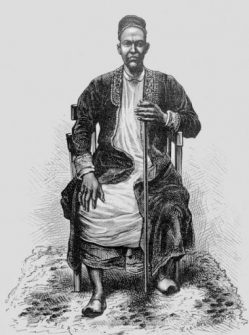 A clan in Buganda represents a group of people who can trace their lineage to a common ancestor. It’s central to the Ganda culture and in the customs of Buganda lineage is passed down along the same lines and the most important unit in Buganda. Members of the same clan refer to each as brother and sister.
The clans are organised from clan leaders (Owakasolya) followed by the successive subdivisions, Ssiga, Mutuba Lunyiriri and the family head (Enju). It’s so important that every Muganda is required to know where they fall with the subdivisions.
Each clan has a main totem (Omuziro) and a minor totem (Akabbiro). A totem is a symbol to the clan and can be an animal, fruit, fish or vegetables. The clans are usually known by their main totems, with the exception of a very unique case of the royal clan (Abaligira) who don’t have a totem. Baganda names are given depending on one’s clan. The Baganda believe that it is a taboo for one to eat his/her totem. For example, a person from the sheep clan is not allowed to eat lamb or mutton or any products from sheep.

Kingdoms
The origin of Baganda may be told in very many different myths but one thing the Baganda are very proud of is their very wealthy culture. This culture is strengthened by the existence of Baganda monarchs who have tried to preserve the norms and beliefs. According to history, the Buganda kingdom has always been the strong kingdom in Uganda and the most organised from the time it was formed. It is believed that there were some powerful people who were said to have established themselves for some time before the arrival of the first king of Muwaawa (Buganda) who was known as Kintu.
The most widely accepted version of the origin of the Buganda kingdom is claimed by historians who say that the Buganda kingdom had begun from Kintu as the first king (Kabaka). 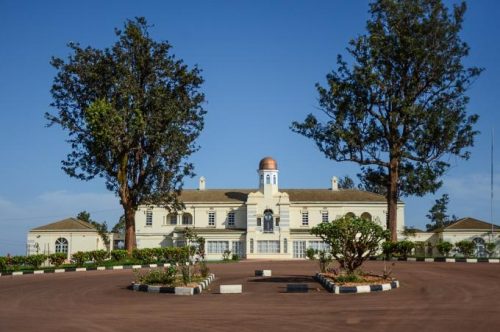 The documented history of Buganda indicates that, the head of Ffumbe clan who was called Buganda Ntege Walusimbi had several children including Makubuya, Kisitu, Wasswa Winyi and Kato Kintu. When Walusimbi died, his son Makubuya replaced him as a ruler.
On his death, Makubuya was replaced by his brother Kisitu as ruler; during Kisitu’s reign, a renegade prince called Bbemba came from Kiziba in Northern Tanzania and established his camp at Naggalabi in Buddo (to this day when a new king of Buganda is crowned, the ceremony takes place here) from where Bbemba planned to fight Kisitu and replace him as ruler of Muwaawa.
Bbemba became so cruel and ruthless when he attacked Kisitu that Kisitu became intimidated and in his fear offered the Ssemagulu (throne) to whoever would succeed in killing off Bbemba, whereby Ssemagulu became the symbol of authority. 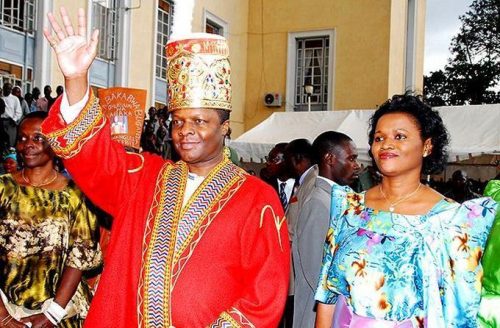 The Kabaka or King Of Buganda Ronald Muwenda Mutebi II with his wife Queen Sylvia Nagginda.

When Kintu heard what his brother had vowed, he gathered some followers from his brothers and some various other clans and in a bid attacked Bbemba and defeated him in the ensuing battle and he was then beheaded by Nfudu of the Lugave clan. Nfudu took Bbemba’s head to Kintu who gave it to Kisitu. When Kisitu saw Bbemba’s head, he had to make good his promise so he abdicated his throne in favour of Kintu telling him that “Kingship was earned in battle”. Although he had abdicated his throne, he still wanted to retain the leadership of the Ffumbe clan so he told Kintu to begin his own clan. He also asked Kintu to name the kingdom after Buganda Ntege Walusimbi. So the kingdom became Buganda kingdom.
Kintu formed a new clan which became the royal clan (Abalangira). This clan separated from the Ffumbe clan thus increasing the number of clans in Buganda. Kintu then established a new system of governance in alliance with other clan leaders. To-date the kingdom of Buganda is still strong with its 36th King being Ssabasajja Ronald Muwenda Mutebi II. (I.L.)