This year marks the centenary of the birth of Focolare Movement founder Chiara Lubich. She is considered to be one of the most influential spiritual figures of the twentieth century. The Movement has moved beyond its origins in the Roman Catholic Church and now involves Christians of many Churches around the world.

Silvia Lubich chose the name Chiara when as a 23-year-old she entered the Third Franciscan Order. She took the name because she was attracted by the commitment of Chiara of Assisi, one of the first followers of St Francis of Assisi in the early years of the 13th century. The Italian word ‘Chiara’ means ‘clear’, ‘bright’, or ‘light’. Chiara Lubich became a beacon of light for the Church in the 20th century – a beacon that has burned especially bright for women.
She carved a role for herself as an activist and as founder and leader of the Focolare Movement. She laid the foundations for other women to share in shaping small communities who seek to contribute to peace and to achieve the evangelical unity of all people in every social environment. Her goal, the objective of the Focolare Movement, was and is to create a world living in unity. 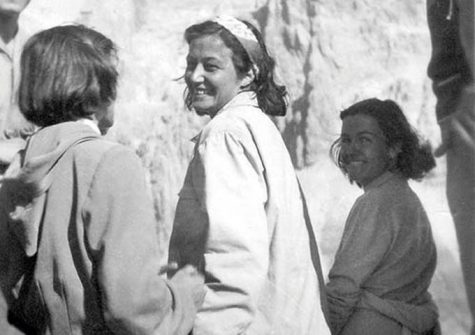 Silvia Lubich was born in northern Italy, Trento, in 1920. This infant was catapulted into the chaos of Italy in the immediate years after the First World War. It was a country disappointed by the carve-up of countries that occurred in 1919. There was already a fascist party on the rise, and life was punctuated in the 1920s by violence between the socialists (of whom Lubich’s father was a member) and the fascists led by Benito Mussolini. Mussolini was Prime Minister of Italy from 1922, when Lubich was a toddler, but by 1925 he had established a dictatorship, which he would rule until 1943, leading Italy into the Second World War on the side of Nazi Germany.
By 1938, Lubich was an elementary school teacher, but she wished to further her studies and began to read philosophy at the University of Venice. This was cut short when the war began, but by 1939, the young woman had already identified a calling to the Church after a visit to the Marian Shrine in Loreto on the Adriatic coast of Italy. 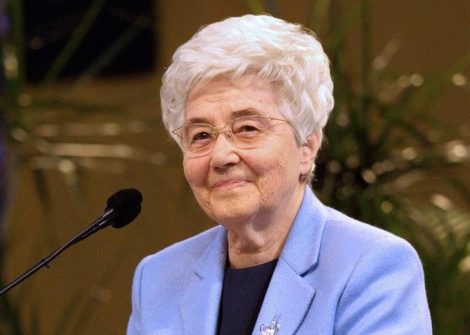 Her vision for the Church was a very female one. The Italian word focolare means ‘hearth’ or ‘fireside’, in other words, the very heart of the family. Whether we live in northern climes (and Trento sees some harsh winters) or in a hot country, families and communities gather around the fire to share, to discuss, and to be together in harmony. During that visit to Loreto, Lubich saw the future of the Church as a community of people, both consecrated and lay members, married and single, all totally committed in their different ways to God.
By 1943, she had dedicated her life to the Third Franciscan Order and 7  December, the day she took her vows and the name of Chiara, was later designated as the start of the Focolare Movement. However, it wasn’t until disaster struck Trento the following year that the Movement really came into being. Five months after taking her vows, Lubich’s family home was bombed. Her family fled to safety from the ruins of Trento; Chiara stayed in the city. She moved into a tiny apartment in Piazza Cappuccini, which she shared with four of her first companions, Natalia, Giosi, Graziella, and Aletta. They were the first ‘fireside community’, the first Focolare group.
By 1947, the Archbishop of Trento recognised the movement officially, calling it a movement created by ‘the hand of God’. Some fifteen years later, it would be accepted as an International Association of the Faithful and given the rather more prosaic name of  ‘Work of Mary’.

A  beacon of light

During those war years, Chiara Lubich took her beacon of light into the heart of communities sheltering from air raids. She took her Bible, sharing with these frightened people whose world was being destroyed around them, the idea that God’s love was the remedy for the horrors they faced. She attracted a group of helpers who went with her to the heart of the poorest neighbourhoods, taking practical and spiritual aid to those injured and made destitute by the war. Bombs may have shattered their physical firesides, but Chiara helped them build spiritual ‘focolare’ wherever they were able to seek refuge. 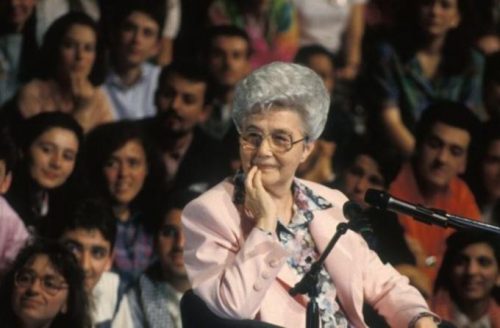 Post war, Chiara Lubich became a force to be reckoned with in government and Church circles. On a visit to the Italian parliament, she met the man she identified as co-founder of the Focolare Movement. Igino Giordani had four children, was a writer, a journalist, a deputy in the parliament in Rome and, most important for Chiara Lubich,
a pioneer in ecumenism.
Giordani was in the vanguard of an ecumenical movement in the 1940s. In 1948, the year he met Lubich, the World Council of Churches was established – but a document that had been issued by Pope Pius XI in 1929 warned against such a coming together. In 1949, however, Pope Pius XII gave provisional permission for Catholic participation in some ecumenical gatherings under careful supervision. It was not until the 1960s and the deliberations of the Vatican II Council that ecumenism and indeed, interfaith dialogue, would be actively encouraged by the Catholic Church, in part influenced by Chiara Lubich.

The art of loving
By then, the Focolare Movement was bringing together people of all faiths and no faith. Lubich, Giordani and their followers were encouraging what today the Focolare Movement describes as ‘the art of loving’, calling it ‘… the first step which leads to a peaceful revolution that can change the hearts of individuals and of the whole world’.
Chiara Lubich intended to create a ‘new people born of the Gospel’, and today, Focolare resembles a big, many faceted family. It has reached out to 182 nations, and more than two million people share in its life and work, spreading the message of unity around the world. To achieve its aims of a more united world that respects and values diversity, it engages in dialogue and is committed to building bridges between individuals and peoples of different cultures and faiths. 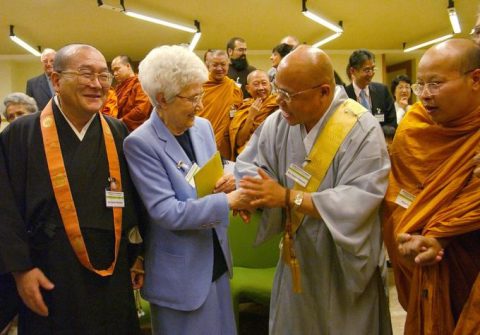 There are lay members of all faiths and of no faith, as well as those who have taken religious vows and are known as ‘focolari’. Chiara Lubich called the spread of this message of unity her ‘divine adventure’. It led her to friendships with popes, heads of Churches, political leaders and the movers and shakers in civil society. A quiet but charismatic woman, she wrote, broadcast, and talked face-to-face with all she met in order to grow the idea that we can live in peace together around the spiritual hearth. She called it ‘one family united in truth’.
In the early days, factions of the Church had regarded Focolare as so extreme as to merit closure and Chiara Lubich was urged to put her energies into a more conventional religious order. But in the 1960s, Focolare’s gentle embers fuelled inter-Church and inter-faith relationships throughout the developing world. The Lubich light burned steadily and by 1963, the ecumenical aspect of her work was really catching fire; she went to England and spoke that year at Liverpool’s Anglican Cathedral, igniting the first British Focolare groups. Three decades later, she was the first white woman of Christian faith to speak at the Malcolm X mosque in New York, addressing 3 000 people. 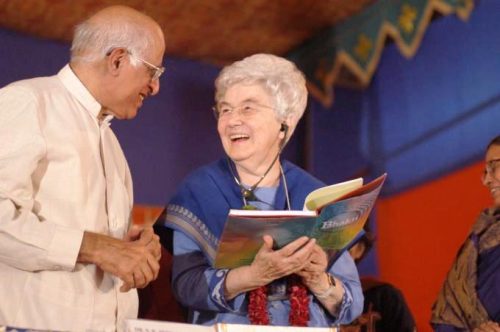 At the heart of Focolare until her death in 2008, was this tiny lady who would pass for anyone’s kindly auntie. Unassuming, she was a powerhouse of activism, waiting for no earthly seal of approval for her work. In a 1988 conference call, she spoke of the Movement’s 200 works or activities that had developed around the world, “…to meet the various needs of our brothers and sisters. There are charitable works for the sick, for older people, the unemployed and those differently able. There are projects for people who are lonely and for overseas students; activities for children in need, for the homeless, prisoners, drug addicts and alcoholics. There are courses for human development and catechesis, projects in the field of economics, work and education. There are initiatives on behalf of developing countries or following natural disasters.” She urged her audience, “…to give some thought to one of these works or activities. I would like you to take it to heart in a special way, interesting yourself in it, helping it develop and grow in whatever way you can, and feeling co-responsible for it.” 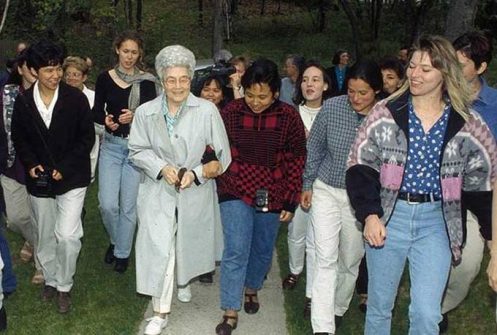 That seems to sum up all that Chiara Lubich and Focolare were and are about. It is no surprise that, despite those early negative reactions to her work, when she died in 2008, more than 40 000 people attended her funeral in the Basilica of St Paul Outside the Walls in Rome. It was presided over by the Italian Secretary of State and concelebrated by nine cardinals, 40 bishops and hundreds of priests.
The cause of her beatification and canonization, started in 2015, is currently in the diocesan phase. Considered to be one of the most influential spiritual figures of the 20th century, she continues to influence us in the 21st century.