The definition of civil war has never quite applied in the case of Syria. Ever since the armed insurrection against the Assad government began in 2011, it has never been a clear case of insurgents fighting against the ‘regime’.

Rather, the war quickly degenerated into a series of ethnic, confessional and national conflicts of which the ‘Sunni vs. Shiite’ was but one. There were also the Kurd vs. Turkey, the Saudi and UAE backed rebels against the Syrian Army, the various offshoots of so-called ‘al-Qaida’ obstructing ISIS, the Turks against the Syrians, Sunni ‘radicals’ against Hezbollah, and a myriad of overlapping combinations thereof. More significantly, the objectives of much of the fighting that has occurred rarely concerned Syria itself. 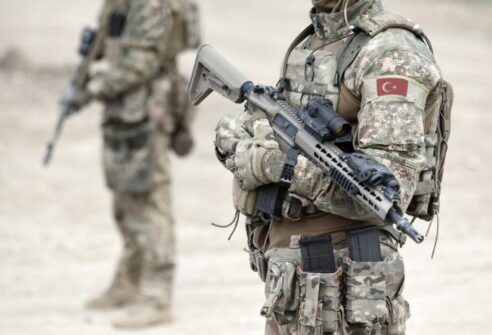 Turkey and Qatar backed the Free Syrian Army (FSA) economically and militarily. But elements of the FSA then split to join other fundamentalist formations such as the Syrian ‘branch’ of ‘al-Qaida’, the al-Nusra Front and the like (Jund-al-Islam, Ahrar al-Sham) backed by Saudi Arabia. The latter, while sharing much of the underlying ideology of ISIS, funded al-Nusra which fought against it, triggering wars within wars, reflecting the interests by proxy of those who were funding the conflict. There was no apparent care about achieving military victory as long as the war continued. The Saudis, the Qataris, the Turks, the Americans and the Israelis would have succeeded in their chaotic goals if not for the intervention of Russia and Iran in 2015.
Unlike Libya, where the ‘Arab Spring’ produced a formal political division splitting the country in two, Syria in 2021 remains officially led by the Baathist government in Damascus headed by President Bashar al-Assad. Yet, in many ways, Syria is more divided than Libya. The use of the term chessboard is not a cliché in describing it. It is a multidimensional chessboard where several powers are playing geopolitical games.

To Achieve a Compromise
It’s unclear what political solutions Washington might propose for Damascus, but no doubt American companies will be itching for lucrative reconstruction contracts, which are now slated to favour Russian, Iranian and Chinese firms. That said, Washington may also manage to achieve a compromise, allowing the Assad government to continue but intensifying its activity with the excuse of fighting what’s left of ISIS. The so-called ‘caliphate’ has been reorganizing in areas of Deir ez-Zor and the Anbar Desert near the Iraqi border. 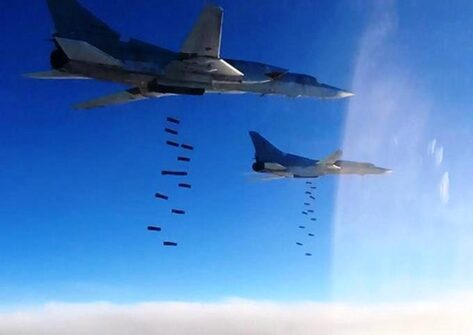 The targeted assassinations of high-ranking Ba’ath Party officials, and particularly that of General Firas Al-Nasaan, director of the Syrian Air Force Secret Service (reputed to be the highest level of Syrian military intelligence) suggests that ISIS, or other rebels, have been able to penetrate Damascus’ most powerful circles. Russia and Iran certainly contained the onslaught from the various rebel forces, but they failed to eliminate them. Nevertheless, it would not be cynical to suspect that ISIS, as did the mujahedin in Afghanistan in the 1980s, is encouraging the Russians’ failure and the Syrian government they have kept afloat. A stronger Iranian and Hezbollah presence would benefit the Russians tactically, but it’s unclear just how much of Tehran Moscow might be willing to tolerate in Damascus. Still, given the considerable economic considerations, from sanctions to low oil prices, generating tensions in the Islamic Republic (complicating its efforts to support key regional allies), it would be unrealistic to expect more forces to help al-Assad’s forces. That is, unless, China were to help finance a wider Iranian military operation. 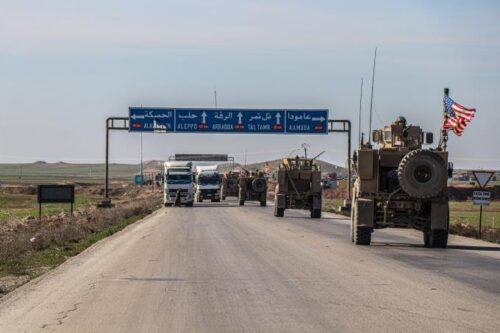 US troops convoy in Syria.

As of 2021, the wider war between the Syrian government and the various rebel forces has ended. Or, mostly ended, as there are ongoing skirmishes in the north-western region affiliated with Hayat Tahrir al-Sham (HTS) and the areas east of the Euphrates, where US forces are supporting the Kurdish-dominated Syrian Democratic Forces (SDF) in their fight against the Islamic State/ISIS.
While the direct military confrontation between the various rebels and the regular Syrian army may have subsided, Syria itself is not at peace. There has been no direct accounting for the war, and the conditions for a resumption of violence remain. There has been no reconciliation process, and the economy remains in a shambles. Most significantly, Damascus does not have full sovereignty over its territory. (A.B.)