Located between the Caribbean Sea and the Atlantic Ocean, Trinidad and Tobago are part of the West Indies Archipelago, a group of islands between Florida and Venezuela and shared with the Caribbean Sea, the Gulf of Mexico, and the Atlantic Ocean. Discovered by the Spanish led by Christopher Columbus, they are called the West Indies to distinguish them from the East Indies of South-East Asia.

Its territory is composed of two islands close to the northern coasts of Venezuela and Guyana. Trinidad, so called in honour of the Most Holy Trinity has an area of 4,800 km2 and is the larger of the two islands. Located just 11 km from Venezuela, it is an extension of the South American region, with its mountains that form a sort of continuation of the Andean chain. Tobago, located north of Trinidad, is instead much smaller and has an area of less than 300 km2. 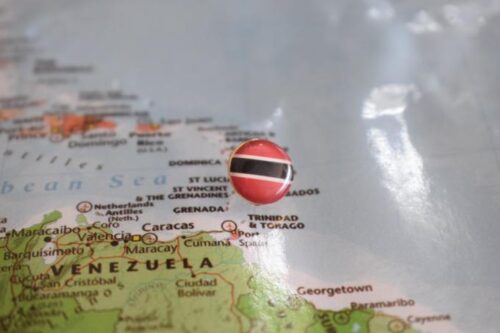 The original intention of the Spanish colonisers was to reduce to slavery most of the Amerindian inhabitants of the island and take them to work in the new Spanish colonies of South America. Since Spain was much more interested in the race for gold, it paid little attention to the economic potential of Trinidad which had few precious minerals. It was only in the centuries following its discovery that the colonisers began to devote themselves to the cultivation of tobacco and cacao, using indigenous labour. This activity was pursued until 1720 when there was a fall in the production of cacao and a subsequent crisis in the industry. During those years, the Spanish encouraged the migration of Catholic workers living on the other Caribbean islands, with the promise of great rewards. Many slaves were brought to Trinidad from the African continent to be put to work on the cotton and sugar plantations. In 1802, Trinidad was ceded to the British, and after the abolition of slavery, began in 1845 to import thousands of ‘indentured labourers’ mostly from India, who began to work on the sugar and cotton plantations at the service of the colonisers. During those years, in addition, immigration of workers coming from various continents besides from the Caribbean islands under British rule, developed. In particular, these workers were Chinese, Syrian, Lebanese, British and Madeirans, transforming Trinidad into one of the most heterogeneous islands in all of the Caribbean. 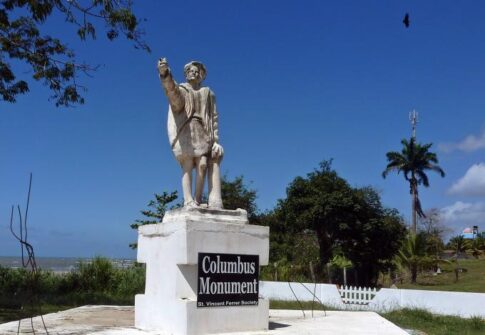 Christopher Columbus monument. Columbus landed here on his third voyage in 1498. This is on the southern coast of the island of Trinidad, West Indies. CC-BY-SA-4.0/ Kalamazadkhan.

Tobago, sighted by Columbus, was originally designated as a Spanish possession. In the XVII century, it passed more than once into the hands of the British, French, Dutch, and even Courlanders. In 1704, it was declared a neutral territory. In 1763, it again came under the rule of the British who set up a colonial administration and worked for the development of sugar and cotton production, importing about ten thousand African slaves in a matter of twenty years.
However, in the years following, the island again passed on different occasions from British to French dominion and, in 1814, definitively came under British rule. The abolition of slavery dealt a severe blow to the economy of the island and created a deep economic crisis though this did not end the production of sugar and rum, which continued until 1884 when the London-based company which controlled the market went bankrupt. In 1889, following the crisis that struck sugar production, at the desire of the British, Tobago became the protector of nearby Trinidad while maintaining separate legislative and taxation systems. From the point of view of institutional politics, during the British colonial period, Trinidad and Tobago followed a two-house system with an elected assembly to which, in 1925, following constitutional reforms, seven new members were added. The desire for greater autonomy grew ever stronger among the islanders and exploded in a series of strikes and disturbances which marked the thirties and gave rise to the birth of an important trade union movement and the 1945 reform which granted universal voting rights. It was these processes that laid the foundation for unprecedented change in the political field represented, in 1956, by the triumph of the PNM (People’s National Movement). Independence was achieved in 1962 when Trinidad and Tobago became a republic. 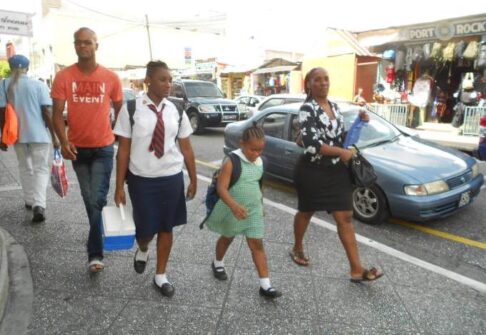 The heterogeneous nature of the peoples present in Trinidad and Tobago forged a tradition of cultural and religious pluralism which saw Christians, Muslims, and Hindus living peacefully together for around two hundred years. However, this equilibrium was lost at the end of the sixties by student protests which, unlike those in the rest of the west and in Latin America, took on an ethnic character. The protesters were members of the African-Caribbean minority who saw themselves as excluded from society and the demonstrators aimed at the overthrow of the ruling, white-centred cultural power. The Black Power Revolution assumed a violent character and created deep ethnic divisions. The government only superficially managed to control the situation and suppress the revolution. This apparent success was due to the discovery of large oil deposits in the seventies and the economic boom that followed. Despite the apparent calm and the economic resources derived from the oil industry, unrest continued to smoulder beneath the ashes and the ideas relative to Black separatism gave way to or were integrated with African-Islamist separatism. This situation led to the rapid diffusion on the islands of the teachings of some African-American Black Panther and Nation of Islam (NoI) radicals which served to prepare the ground for the attempted coup on 27 July 1990 by members of the minority Muslim group called Jamaat al Muslimeen (JaM). 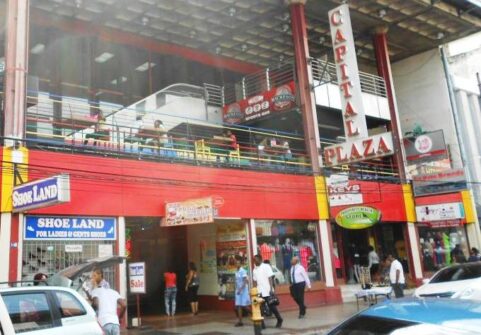 During those days, there were serious disturbances in the capital Port of Spain resulting in 24 deaths and 231 wounded. The local commissariat was attacked and the national television station, together with the parliament, was occupied. The situation returned to normal after four days of negotiations which marked a turning point for the country since the Jamaat al Muslimeen (JaM) emerged significantly strengthened and recognised as a de facto force present in the country; this allowed it to take root in the ghettos of Trinidad and Tobago which it transformed into a recruiting area for international Jihadism in the Americas. (F.R.)