Mexican people and other cultures have been a corn-based diet culture since ancient times. Mexican creativity has no limits on corn. Proof of this are the multiple ways in which this grain is integrated into our table: tortillas, quesadillas, chilaquiles, chalupas, tamales. But also as a drink. Let’s discover the great richness of Mexican cuisine.

When torn into four perfect triangles with a curved base, how perfectly it responds to the pressure of our fingers, folding just enough to wrap, capture and enhance the flavor of a mouthful of beef, or stewed pork rinds, or beans, or rice, leaving the last triangle to collect the final vestiges of salsa and then disappear into our joyful mouths!
But if we can’t or don’t want to sit at a table, taking hot tortillas one by one from the basket where they have been placed after being swathed in an embroidered napkin, that means it’s time to go for tacos: with one tortilla or two, overlapping them until they’re as long as the rolled tacos called flautas. We wrap them around whatever is at hand: guacamole or carnitas, chicharron or barbacoa, just salsa if necessary or, as a last resort, just salt. Certain heretics have tried to imitate our tacos using crepes, but they’ve got nothing on the tortilla.
Rolled like a cigarette against the palm of the obliging left hand, the tortilla awaits the generosity of the other, curling up in expectation of its surrender to the right hand which will carry it to the avid mouth where it will die by dismemberment, dripping just enough salsa to warrant licking one’s fingers. (Pipian is a famous dish; the flavour alone will make you want to eat your hands.) 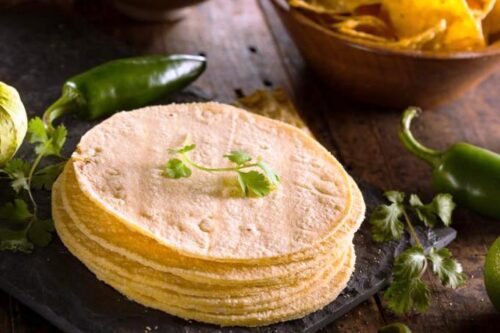 Besides the taco, the tortilla has other incarnations that can and should be enjoyed at the table. There are the enchiladas: green or red; with or without cream, cheese and onions; either stuffed with chicken or not. The enchilada represents the wandering taco’s reinstatement at the civilized table – the return of the prodigal son, now grown, experienced and sophisticated. And what about quesadillas? Filled with potatoes, cheese, squash flowers or brains, and always with a slice of chili.
The tortilla makes yet another appearance as the tostada, which can be spread with refried beans and then topped with shredded chicken, avocado, perhaps a chipotle chili or tomato salsa, a spray of chopped onion or aged cheese. Or it can simply be a totopoxtle – a large tortilla, toasted until golden – brown and crunchy. Or we can cut the tortilla into triangles and fry them for use as croutons in certain Mexican soups such as Sonora-style cheese soup or black bean soup.
Then there are the tortillas left over from the day before: sliced and bathed in the appropriate salsa, then sprinkled with cheese, they become chilaquiles just when we crave them most.
Mexican ingenuity knows no bounds when it comes to corn and corn dough: our flesh and our sustenance. There are also the peneques, thick potato-and-cheese gordos swimming in tomato salsa; or the chalupas, tortilla boats dripping green salsa; or the garnachas, spilling over with charred rubies of chorizo sausage crumbled onto a bed of ground beans and topped by a few shreds of fresh lettuce. 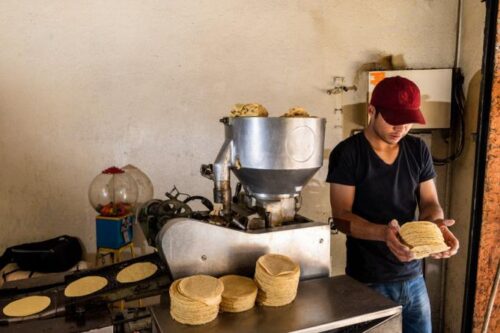 And then we come to the tamales: the classic ones which can be spicy, sweet or rich. The dough, expertly beaten until it foams, is then spread sparingly onto cornhusks which have been dried and then soaked. Each tamale is endowed with whatever filling it is meant to hold – pork, chicken, raisins, almonds – and then placed in the pot for slow steam-cooking.Some tamales are cooked in banana leaves, whether costeňos or oaxaquerios. The triangular michoacanos are cooked in green cornhusks. There are also tamales cooked in clay pots, which come in endless varieties: from the nalga gorda of Zacatecas, to those of Yucatan, which include pibiles and mucbi-pollos, whose main ingredient is the sacred corn. This state is also home to a dish called huevos motuletios, which consists of fried eggs served between tortillas dressed with refried beans and a vinegary salsa.
Finally, we drink corn: in white atoles or chocolate cham-purrados, or strawberry atole (also a popular flavor of tamale); or in chilatole, like in Sahagiln’s time. Also in sende or tzen-decho, which is a fermented corn drink; and tlazcalate (flax-calatl) from Oaxaca; and in tesguino, with which the Tarahu-mara Indians get sacramentally drunk.
To thicken their sauces quickly without spending money on extra egg yolks, sly cooks and thrifty housewives use another product of this plant: cornstarch. Corn syrup is a frequent ingredient in desserts. The corn flakes that Americans love to eat for breakfast are simply tiny, thin tortilla chips. Polenta and borona, served in many regions of South America and Europe, are also made of corn. 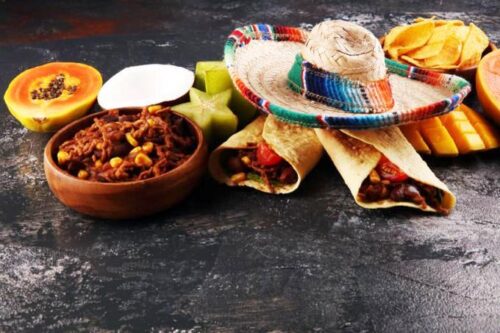 And so, every part of an ear of corn is used: we eat the kernels and use the husks to make tamales. What’s more, I have a sneaking suspicion that since the fabrication of tortillas and corn dough became government regulated, the tortillas produced have been tougher, owing to the fact that even the cobs are ground and mixed into the dough. That is pure speculation. I am not making any accusations. But if you truly want to eat good tortillas, you need to make them at home, even making the nixtamal, which is simply corn cooked with quicklime.
Even the corn silk can be used: there is no better diuretic than water in which the silk has been boiled. Scientists have studied the nutritional properties of corn and discovered that it contains inositol, a B-complex vitamin which helps lower cholesterol levels in the blood and unblock the arteries. Animal testing has shown that when deprived of this element in isolation, they lose their hair, but that it grows back when they begin ingesting it again.If all this is true, then it explains a lot about the Mexican people and other cultures that have had a corn-based diet since ancient times. In indigenous communities, for example, indigenous men do not go bald. And finally, many indigenous people boast a full set of healthy, white teeth until a very old age, having used only ground burnt tortillas to clean them.