Pope Francis has approved a decree on the heroic virtues of the Little Sister Magdeleine of Jesus, who – inspired by the spirituality of St Charles de Foucauld – founded the Little Sisters of Jesus. She used to say: “I am never so close to God as when I am travelling”.

Magdeleine Hutin (Little Sister Magdeleine of Jesus) was born in Paris in 1898, into a family from eastern France. Her infancy was sadly marked by the First World War: her family was decimated and her village destroyed. From childhood, she wanted to give her life totally to God while from her father she learned how to love the Arabic peoples.
In 1921, she was struck by her discovery of the figure of Charles de Foucauld, reading his famous biography by the writer René Bazin. She too wanted to live a life centred upon Jesus among the Moslems and witness by her life, like Jesus of Nazareth, the love of God for humankind.However, she suffered from polio and this seemed an insurmountable obstacle to her plans until –  to her great surprise –  she was advised by a doctor that the only cure was to go to a country where it never rains. Consequently, in 1936 she travelled to Algeria together with her companion Anne Cadoret. 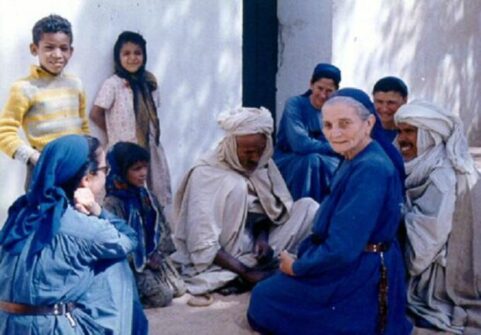 In 1939, she reached Touggourt in the heart of the Sahara, among the Tuaregs and gave her life to the Fraternity of the Little Sisters of Jesus. During her time there she wrote:  “I have realised that loving friendship can co-exist with racial, cultural and social differences. They have treated me with such goodness and moving gentleness”.
Gradually, Little Sister Magdeleine understood that the vocation of this sign of the Spirit is not only to the Sahara and its nomadic populations. As a result, in 1946 the Fraternity opened up to the whole world, with a particular desire: to be present especially in places marked by hatred among nations. The Little Sisters then began to go beyond frontiers then believed impossible to cross. For example, beginning in 1956, Magdeleine succeeded in organising very discreet visits to Eastern Europe, beyond the Iron Curtain. Her mode of transport was a small van nicknamed the Shooting Star. Her aim was to comfort persecuted Christians and establish ties of friendship with all she met, of all faiths and none. In Russia, she joined in the prayers of the Orthodox Christians and many members of that Church became her close friends. 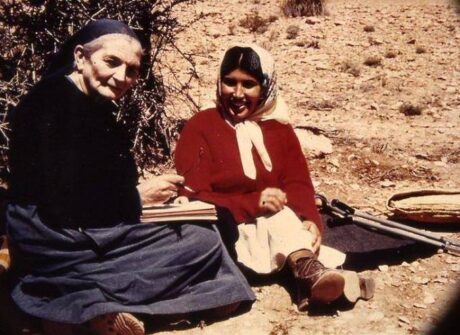 During that same period, she reached Kabul where the Little Sisters would live for sixty years (until 2017) serving in the hospitals and being “Afghans among the Afghans”. Later, when Jerusalem was divided in two by the 1948 borders and she was offered a house at the church of Saint Veronica at the VI station of the Via Dolorosa, she was extremely happy. Nevertheless, after establishing this foundation in the Arabic sector of Jerusalem, she felt the need to found a community in the Jewish sector as well, among the people on the other side of the barricade.
Eventually, she herself, together with some companion Sisters, passed through the Mandelbaum Gate, the only crossing-point in the armistice line which, until 1967, physically divided the Holy City into two rigidly separate parts. That small community opened in the heart of modern Israel would later play an important role in the life of the Vicariate of St James, the tiny Hebrew-speaking church that was reopened in Jerusalem.
Little Sister Magdeleine was a woman from all the peripheries of the world. She would say: “I am never so close to God as when I am travelling”.To her fellow Sisters she said:  “All I ask of you is that you be the smile on the face of this world: if you do just this and nothing else, you will be like a small ray of sunshine entering a cold and dark room to light it up and warm it and this will be enough”. 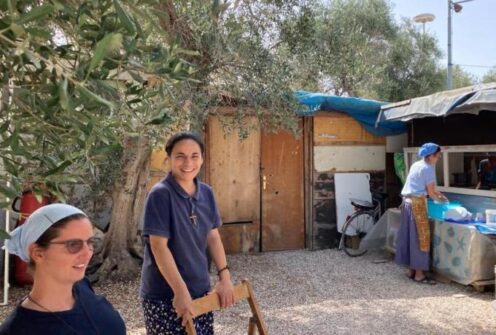 On 8 September 1989, the Sisterhood celebrated its fiftieth year since its foundation. A short time earlier, Sister Magdeleine, now over ninety, suffered a fall. Her worn-out body never recovered fully. Her longing for Heaven was about to be granted. Her last words were: “I can wait no longer” as she departed this life on 6 November 1989.
On the day of Sister Magdeleine’s funeral, the large number of people from many different countries, of different religions and denominations, clearly showed the greatness of this woman who appeared so fragile. 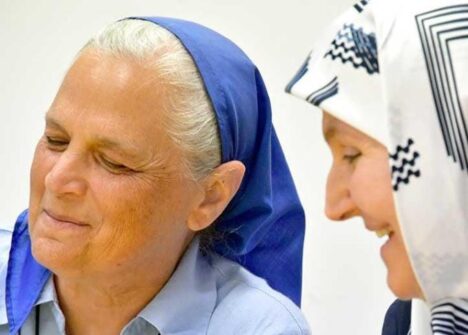 To her fellow Sisters she said: “All I ask of you is that you be the smile on the face of this world”

Though Little Sister Magdeleine was always aware of her defects and her limits, repeating often throughout her life that she was just ‘a crooked tool’ in the hand of the One who led her by the hand, after her death, many people testified that they found her to be ”a friend of God’, a companion in their spiritual lives and one whose intercession they invoked in their prayers. For this reason, at the request of many friends, the Cause of her beatification was opened in 1997.
On 13 October 2021, Pope Francis authorised the Congregation for the Causes of the Saints to promulgate the decree of the venerability of Little Sister Magdeleine of Jesus. It was acknowledged that she had lived, to a heroic degree, the Christian virtues. Her message lived with simplicity and love, consisting in respect for the least, the acceptance of others with their unique differences of faith, temperament or culture, is very relevant in the world of today. (G.B.)

Agroforestry. Life back to the land.

Two projects, systems of agroforestry, are helping bring life back to the land  in Central America Rainforests are the most productive ecosystems on the planet, and…

Why Zebras have Striped Skins.

Long ago before people started taking any other animal apart from the dog, it was said that donkeys could also be tamed. This rumour was told…

October Is Missionary Month. Three Young Comboni Missionaries Share their Vocation Journey My name is Brother Alberto Lamana. I was born in 1971 in Zaragoza, Spain.  I…