Located in the rim around the Pacific Ocean dubbed “The Ring of Fire,” the Philippines is one of the most disaster-prone countries on earth. It is hard hit all year round by earthquakes, volcanic eruptions, floods, tropical cyclones and landslides.

“The Ring of Fire” – that is how scientists call that thin region of dynamic volcanic and seismic activities around the rim of the Pacific Ocean.  “The activity is the result of the movement of the tectonic plates, the surface crust on which our world is formed, which slowly grow and butt against one another causing cracks that allow deeper molten rock to rise to the surface through what we call volcanoes.  Any movement of the plates creates seismic activity we know as earthquakes,” wrote Lindsay Bennet in her travel book entitled Philippines. 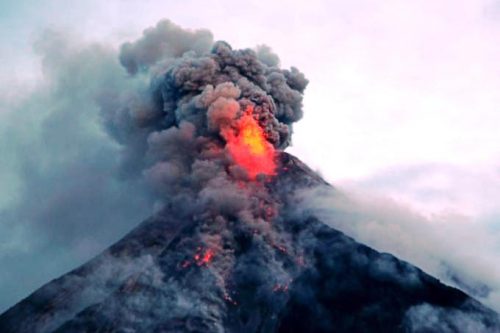 Unfortunately, the Philippines  – a country with more than 7,600 islands – is located in this rim of what is sometimes called the circum-Pacific seismic belt.  Disasters are not waiting to happen; they happen every now and then.  As Kathleen Tierney, director of the Natural Hazards Centre at the University of Colorado, puts it: “The Philippines is one of the most disaster-prone places on Earth.  They’ve got it all. They’ve got earthquakes, volcanic eruptions, floods, tropical cyclones, landslides.”

Volcanoes
According to scientists, the Ring of Fire has 452 volcanoes and is home to over 75% of the world’s active and dormant volcanoes. The Philippines, for instance, has around 200 volcanoes scattered all over the archipelago. Fortunately, only 21 are considered active.
A volcano is considered active if it has erupted sometime within the last 600 years.  If a volcano has not erupted in 600 years, it is regarded as inactive (dormant).  There are also volcanoes which are considered extinct.The active volcanoes in the country, according to Philippine Institute of Volcanology and Seismology (PHIVOLCS), are Pinatubo in Zambales; Mayon in Legazpi City; Taal in Talisay, Batangas; Canlaon in Negros Oriental; Bulusan in Sorsogon; Smith, Didicas, Babuyan Claro and Camiguin de Babuyanes, all in Babuyan Island Group; Cagua in Cagayan; Banahaw in Laguna/Quezon; Iriga in Camarines Sur; Biliran in Biliran;
and Iraya in Batanes. 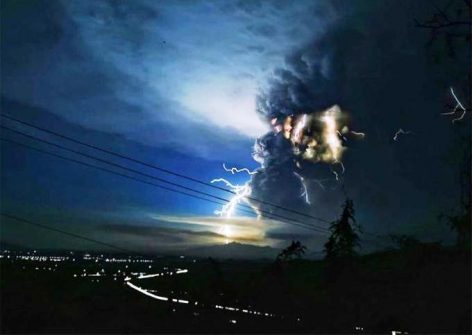 In Mindanao, the active volcanoes are: Ragang and Matutum, both in Cotabato; Hibok-Hibok in Mambajao, Camiguin; Calayo in Valencia, Bukidnon; Bud Dajo on Jolo Island; Musuan in Bukidnon; and Makaturing in Lanao.“Like ghosts and monsters, volcanoes can be scary when they erupt. They rumble, shake and spit out fire, steam, ashes, and rocks. But unlike ghosts and monsters, volcanoes are of this world. As such, they can be studied and understood,” commented the late Raymundo S. Punongbayan, who was heading Philippine Institute of Volcanology and Seismology (PHIVOLCS) when he said those words. 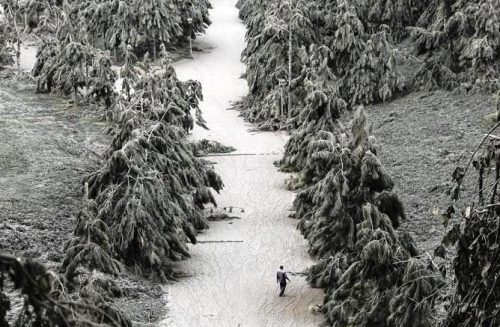 One of the most famous volcanic eruptions happened in 1991 when Mount Pinatubo woke up from its deep slumber.  “Small explosions began the process on April 2 when a fissure broke at the summit and rumbling earthquakes were felt around the lower slopes,” Bennet wrote.  “On June 7, a dome was noted in the crater.”
“The first eruption started on June 12 but the volcano blew its cork, literally, on June 14, with two days of violent explosions that flung debris high into the atmosphere,” Bennet continued.  “The mountain lost 300 meters in height.”

Earthquakes
About 90% of the world’s earthquakes and 81% of the world’s largest earthquakes occur along the Ring of Fire. “The Philippines suffers around 20 earthquakes a day but most are too weak to be felt,” Bennet wrote.
The Philippine Archipelago lies between two major tectonic plates: the Philippine Sea Plate and the Eurasian Plate, PHIVOLCS says. “Philippine Sea Plate is moving towards the Philippine Archipelago at the rate of about 7 centimetres every year,” they explain.  “The Eurasian Plate is being subducted along western side of Luzon and Mindoro at the rate of 3 centimetres per year except in Mindoro and northwest of Zamboanga where collision is taking place.” 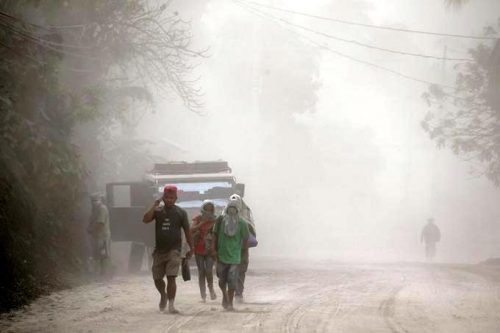 At the intersection of the two aforementioned plates is the Philippine Fault Zone, “which decouples the north-westward motion of the Pacific with the south-westward motion of the Eurasian Plate.”  Movements along other active faults are reportedly responsible for the present-day high seismicity of the Philippine archipelago.
The worst earthquake to hit the country happened on July 16, 1990.  A 7.8-magnitude earthquake struck the densely populated island of Luzon, which killed an estimated 1,621 people with most of the fatalities from Central Luzon and the Cordillera region.
Baguio City, one of the country’s most popular tourist destinations, was among the hardest hit areas.  It caused 28 buildings to collapse, including hotels, factories, government and university buildings, as well as many private homes and establishments.  Kennon Road, the main vehicular route to Baguio, as well as other access routes to the mountain city were shut down due to landslides. It took three days before enough landslide debris was cleared to allow access by road to the stricken city.

Typhoons
“The Philippines is considered to be one of the most storm-exposed countries on Earth,” said the website of the US Embassy in Manila.  “On average, 18-20 tropical storms enter Philippine waters each year, with 8 or 9 of those storms making landfall.”
The Philippines is located in the region which, according to the US National Hurricane Centre, is referred to as the northwest Pacific basin. Wikipedia shares this bit of information: “The majority of storms form between June and November whilst tropical cyclone formation is at a minimum between December and May. On average, the north-western Pacific features the most numerous and intense tropical cyclones globally. The Philippines receive a brunt of the landfalls, with China and Japan being impacted slightly less.” 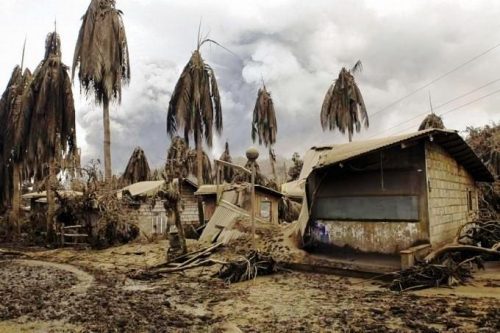 The deadliest typhoon on record happened in 1881, when Haiphong hit the country killing about 20,000 people.  Yolanda (international name: Haiyan) left 6,241 people dead.  Uring (Thelma) in 1991 killed 5,956 people while Pablo (Bopha) snatched 1,901 people.
There is no month in the country that is free from typhoons. “About 95 percent of the tropical cyclones affecting the Philippines originate in the Pacific Ocean while the rest come from the South China Sea,” says the state-owned Philippine Atmospheric, Geophysical and Astronomical Services Administration (PAGASA).A government report said that from 2010 to 2012, “the Philippines faced 46 typhoons and 1,019 non-typhoon-related disasters that affected more than 5.6 million families and caused around P93.13 billion in damages.”

Mitigating Natural Disasters
Despite being known as a disaster-prone country, most Filipino households are not prepared for such calamities and natural hazards.  That was the findings of a survey conducted by Harvard Humanitarian Initiative Disaster Net.
“Only 36% of respondents felt fully prepared in the face of disasters, while 33% reported that they were somewhat prepared when calamities strike,” wrote Inquirer reporter Jhesset O. Enano.  “The remaining third claimed that they were only slightly or not at all ready for natural hazards.”Disaster often recur in the same place – annually or with a gap of some years, according to Bob Hansford, disaster risk management advisor at Tearfund, a Christian relief and development agency. 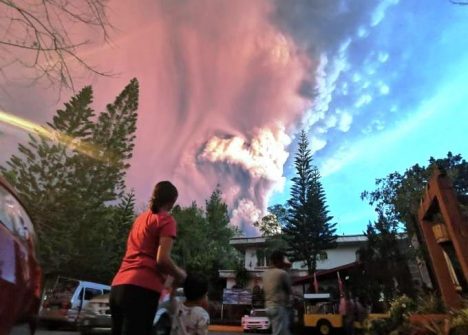 In his article, “Managing disaster and building safer communities,” Hansford talk about the four things that happen when a disaster strikes: emergency response, rehabilitation, mitigation, and preparation.
“In the first few days and weeks after a disaster, there is a need for search and rescue, medical care, food, water, sanitation and shelter, as well as emotional support,” explains Hansford on what an emergency response is.Rehabilitation comes next.  “As the weeks pass, houses need to be repaired, water supplies restored, and livelihoods re-instated,” Hansford says.  “Rehabilitation is often called recovery.”Mitigation is closely linked to rehabilitation.
Examples include: stronger or raised houses, water pumps on raised platforms, alternative crops to cope better with flood or drought.  “Mitigation activities help to ‘build back better,’ making the community more resistant to future hazards,” he says.
Preparation is getting ready for the next disaster that comes.
For a storm or flood, it means establishing a warning system, setting aside food or water stocks, making ready an evacuation center or training volunteers.