As the Ba’ath increasingly dominated the State, the Communists faced greater restrictions on their activities. By the early 1980’s they had been virtually silenced. Indeed, the Ba’ath Party suppressed all secular opposition. The effect was that all political grievances were increasingly channelled through the Shiite Islamic movement.

The Shi’a were poor, but well represented politically during the monarchy; four of eight prime ministers from 1947 to 1958 had been Shi’a. However, there were few Shi’a in the armed forces reducing their upward mobility after the Ba’athists took over. From a practical perspective, this meant that the Shi’a clergy wielded marginal influence to the rank soldiers, as the Revolutionary Command Council – RCC – had not one single Shi’a member from 1968 to 1977.
Even at the regional command level, the Ba’ath was almost entirely dominated by the Tikriti clan (to which belonged Saddam Hussein and his predecessor Ahmad Hassan al-Bakr). 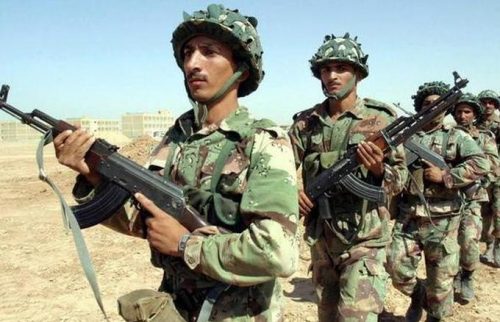 Many such Tikriti officials occupied important posts, even when they lacked the proper education and preparation for office – some were promoted to technically demanding posts as directors of industrial corporations. In contrast, the Shiites resented the absence of meritocratic standards. Interestingly, records of Shiite activists, who died in jail in the early 80’s show that many were very educated. The Ashura processions held on the 10th of Muharram (the first month of the Islamic Calendar) served as the platform for anti-government protest. In 1977 thousands were arrested and many killed as the army tried to quell demonstrations, which began at such commemorations. The fierce reaction to these revolts indicated the regime’s assessment of the potential strength of the Islamic movement.
Indeed, Saddam began to adopt a carrot and stick policy of co-optation in the late 70’s which would mark much of his dealings with the Shi’ites until his demise in 2003. 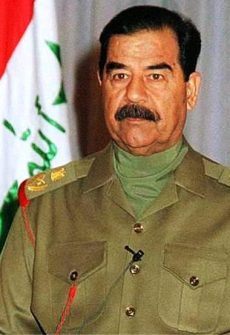 While his forces repressed revolts, the government of Saddam Hussein increased religious endowments and gifts to the Shiite Ulama and declared the birthday of the Imam Ali, a key figure in the Shi’ism practiced in Iraq, Lebanon and Iran, a national holiday. During the Gulf War of 1990-91 Saddam Hussein even altered the Iraqi flag by adding the holy words “Allahu- Akbar” (more or less “God is Great”). This is very significant, as the Ba’ath frowned on religious expression. Nevertheless, membership in the Al-Dawa party was punishable by death. Ultimately, the politicization of the Iraqi Shi’a began as a reaction to the secular policies adopted by the post monarchical governments in Iraq since 1958. The demise of the Iraqi Communist Party under Ba’ath rule and the tribal – Takriti- basis of advancement within the political hierarchy left the Islamic party and Shi’ism as the only vehicle of opposition – its operations facilitated by the religious infrastructure of mosques and religious institutions, which, although financially weaker, had never been illegal. Admittedly, the Iraqi Shiite movement did get a boost after the 1979 Islamic Revolution in Iran. It adopted a militant strategy, which carried out acts of defiance and guerrilla actions against key government targets. Famously, there was an assassination attempt on Saddam Hussein in August 1979 and Tariq Aziz, deputy minister, April 1980. 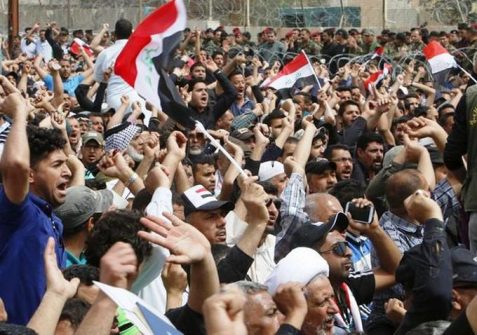 The government responded with increased repression and started to expel large numbers of Shi’a – over 53,000 between 1980 and 1982 alone- into the Bakhtiar region of Iran. Al-Da’wa members were persecuted and many voluntarily left Iraq. The Da’wa leadership settled in Teheran. Saddam Hussein also offered his usual carrot. Many Shi’a were offered access to good government posts as well as the Party structure itself. By 1987 over 33% of the Ba’ath leadership was Shi’a. The principal areas of Shiite revolt such as Najaf, Karbala and Saddam City (now Sadr City) were the object of renovations and infrastructural improvements in the form of greater access to running water, electricity and paved roads for their population. Yet, during the nineties, the Da’wa was most certainly the only party, which officially mounted any opposition to Saddam Hussein. The party advocated armed resistance to the regime and spawned the notorious Sadr Brigades, who in 1996 almost killed Saddam Hussein’s son Udai leaving him permanently crippled. The Sadr Brigades are also sometimes known as the Iraqi Hizbollah. In the 80’s there was also cooperation among secular minded and Shiite opposition groups in resisting the rule of Saddam Hussein, but the latter’s repressive tactics strongly reduced their effectiveness. Since Saddam Hussein was toppled, the Shi’a seemed to be divided among those who supported Ayatollah Ali Sistani, perhaps the highest living Shi’i authority and the young Moqtada al-Sadr.
An examination of the process of Shiite politicization is essential for rebuilding Iraq.  As many scholars indicated prior to the war in 2003, you cannot even begin to discuss democratization without considering the Islamic political reality that much of the Middle East and North Africa have to face. Because of decades of repression of secular opposition forces, and through a variety of social mechanisms the region is now left to contend with a well-organized and rooted Islamic political reality. Any government, whether dominated by Shiites, or Sunnis, whether or not subservient to the United States, will have to contend with the potential for radicalization on religious lines. 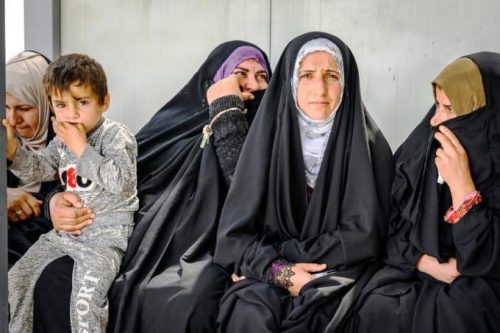 It should be noted that Iraqi society is in fact not as easily classified into the neat Shiite, Sunni and Kurdish regions as Western powers have stressed in the aftermath of the first Gulf War with the clear divisions marked by the ‘no-fly’ zones. Certainly, the Shiite majority has neither insisted on dividing Iraq along confessional lines or, for that matter, professed hostility toward the Sunni majority. The Shi’ites since the period of the monarchy have organized politically in order to improve their socio-economic conditions within a unified Iraqi State. As noted, many Shi’a actively engaged in the Communist party and even the Ba’ath party. The religious aspect was less a conscious choice than it was one resulting form a process of exclusion. As secular opposition groups were decimated, the Da’wa party united all opposition forces under its patronage. Nevertheless, the Sunnis of the Central and Northern areas of Iraq have failed to accept the rule of Shi’a clerical authorities – in fact how many secularized Shiites would? Iraq is not Iran. It is, unfortunately, easier to conceive an Iraqi future unraveling along a Lebanese scenario for Iraq, with a government split proportionally among the various confessional and ethnic lines as proffered by the Ta’if accords of 1989, rather than one characterized by political parties that cut along confessional lines.

…And Ethnic/National Ones; The Kurds

The Kurds in Iraq represent between 15-20% of the population. In Iraq, the Kurds had more rights right from the start, but suffered violent repression. They formed Democratic Party of Kurdistan (KDP) which under the leadership of Mustafa Barzani began to claim greater autonomy. In 1961, they engaged in armed struggle. 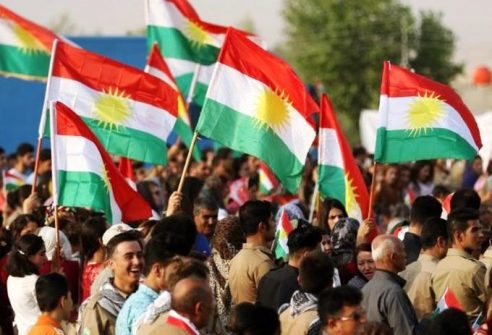 But, by the mid-1970s, divisions emerged within the KDP that spawned the Patriotic Union of Kurdistan (PUK) led by Jalal Talabani, who became Iraqi President from 2005 to 2014. After Saddam Hussein was toppled in 2003, the Kurds have enjoyed growing rights and today have a Kurdistan regional government, which administers the three provinces of Dohuk, Irbil and Sulaimaniya.

What Happens After ISIS?

The defeat of ISIS in Syria and Iraq has allowed Shiite, and Kurdish, militias from Lebanon to Iraq to gain prestige and tactical expertise. It has also allowed Iran to deepen its influence, extending its area of influence from Tehran to Damascus via Baghdad. An Iranian dominated Shiite crescent is now all but reality. That will attract more Israeli attention. Indeed, reports suggest Israel has been attacking Iraqi military bases, alleged to host Iranian military advisers as well as Iranian missiles. The latest such attacks occurred on July 30, 2019. 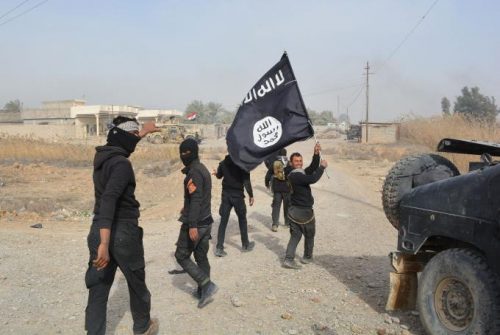 President Trump’s attitude toward Iran, particularly in the form of additional sanctions and the repeal of the 5+1 nuclear deal, has not helped President Rohani. But, it has given a stronger hand to hardliners, who want to restart the nuclear weapons program. The hardliners, presumably, would also encourage its regional clients (Iraq, Hezbollah) to take a stronger stance against Israel. The Iraqi government, therefore, will have to endure more pressure. But, there’s another issue that will place massive obstacles ahead of a full-on Iraqi social and economic reconstruction. (A.B.)