Bonga is one of the capitals of Ethiopian coffee. At the corner of every alleyway, one of those tiny coffee shops known as ‘buna bets’ is inevitably found. We start our journey to the deep heart of Ethiopia from this small town.

It may be a small, plain, rural sort of town but Bonga has a spirit of its own. It soon become obvious what it is all about: coffee. In Bonga, coffee, or buna, as it is called in Amharic, is everywhere. At the corner of every alleyway, one of those tiny coffee shops known as ‘buna bets’, is inevitably found. They are run by women and every day, until late in the afternoon, their terracotta coffee pots are on the boil.
In the centre of the town there is a monument to a grain of coffee: it stands in the courtyard of the coffee museum (still to be opened) in celebration of what, for the entire population, is a symbol of hope and the promise of possible riches. 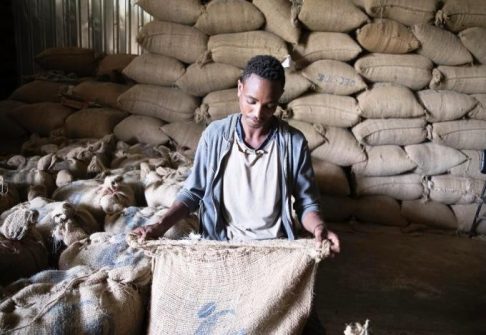 Kafa is one of the areas of Ethiopia richest in coffee and Ethiopia is the largest producer of coffee in all of Africa. The local economy, based on micro-agriculture, is mainly based on coffee. Even the name of the region, Kafa, is connected to that of coffee. The Arabica coffee plant has always grown wild here in the undergrowth.
It was from here that the shrub was transplanted in the Arabian Peninsula, where, according to historical accounts, in the twelfth century, it began to be cultivated regularly. From there it was spread throughout the world by Arabic civilisation.
The best place to learn about the local coffee economy is at the Kafa Forest Coffee Farmers’ Cooperative Union. Founded in 2004 at the instigation of the government, the Union has grown year on year. Today it has 42 cooperatives scattered throughout the ten districts around the town of Bonga and is the reference point for 14,000 small and very small growers, for small producers with allotments of one hectare as well as for men and women who collect the beans from the wild trees that flourish in the forest undergrowth. 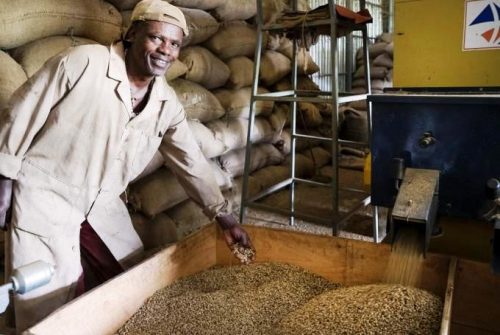 In the forecourt of Kafa Forest Coffee Farmers’ Cooperative Union, women are hard at work. Even late in the afternoon, in the shade of tin-roofed porticos, they bend over the coffee beans to sort out the bad grains from the good. Inside the barn the machinery is in constant use, bagging the beans in sacks of 60 kg. Lorries parked along the road nearby wait for their loads of coffee to take to Addis Ababa.
It is at the capital, a night’s journey distant, that the price of coffee is worked out at the stock exchange and placed on the market.
From there, the coffee for export is taken to the port of Djibouti and from there to the markets of the world.
The coffee business in Ethiopia is governed by rather centralised rules. The farmers must bring their produce to territorial collection points or to commercial agents authorised by the government. There the grains of coffee are bought at the price decided by the Ethiopian Commodity Exchange (ECX), the Ethiopian stock exchange that has regulated the coffee market since 2008. The beans are then processed in barns like that of the Kafa Forest Coffee Farmers’ Cooperative Union. Two sorts of coffee are produced. The first is sundried coffee with the beans being dried in the sun. The process is less intensive and this coffee is for the local market. Then there is the washed coffee which is considered better. It is obtained by soaking the cherries in water and then shelling them. This is more profitable coffee and is for export. It has been promoted by the government for at least fifteen years with production incentives. 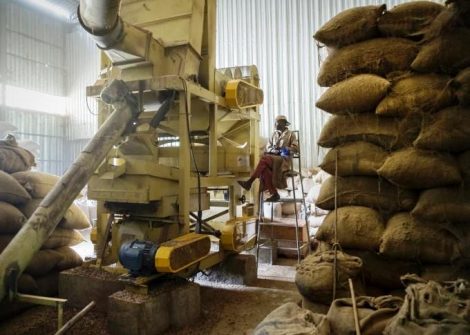 For at least ten years, the coffee market has been growing in Ethiopia, the main producer of coffee grains in Africa with 40% of the continental harvest, the sixth largest in the world. According to estimates, this year 426,000 tons will be placed on the market, equivalent to 7.1 million sacks of coffee beans. The export of this product plays a key role in the economy: 232,000 tons per year pass through the port of Djibouti,  22% of the total exports of the country and 3% of the world coffee market. In fifteen years, the volume of export business has risen by 113%, also due to the rising price of coffee beans. According to the USDA (United States department of agriculture), the business is worth 897 million dollars. Ethiopian coffee is sold in Germany, Saudi Arabia, Jan and the US.
In Ethiopia, the cradle of Coffea Arabica, there are four million coffee growers. In total, the sector employs 15 million people, 15% of the population.At least 95% of production comes from small or very small holdings scattered especially throughout the region to the south-west.  They are family-managed and coffee is one of the crops that make up the domestic economy.

Give in order to live

The coffee plantations are to be found all around Bonga. Near the village of Dukra Woshi, in the shade of the rainforest, there is a private plantation of some hectares. It is surrounded by a fence. The owners were not there so the workers showed us the coffee trees. By the side of the rough road leading to Bushasa town, a man emerges from a clearing and takes us to see the small coffee trees that he has assiduously grown around his hut. He is helped by his young sons. He smiles as he strokes the bunches of beans hanging from the branches. Here the coffee trees are life itself and every village has a sacred tree to which small offerings of milk and butter are brought. This custom belongs to the traditional religion and has stood the test of time, despite the fact that the majority of the people are Orthodox Christians. 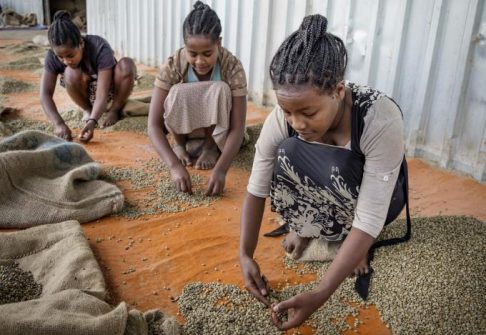 In the village of Aby we come across a market held under an enormous tree. Women and children sell coffee beans piled up in heaps on coloured cloths alongside tubers, cereals and seeds. They too proudly show us their buna. The country is simple, the people go barefoot and transport is by mule. Nevertheless, despite the poverty, one gets the impression that people are living a dignified life. With its gifts, nature guarantees subsistence but it can also bring rescue and hope.
An Ethiopian of the Menja ethnic group whom we met in the administrative area of Gina spoke to us. Historically, the Menjas were marginalised. The live isolated in small villages, hidden in the depths of the forest. Theirs is a life of poverty among the poor lived under the stigma of social prejudice that keeps them outside of and excluded from community life. They have no access to schools and their main source of income is collecting and selling firewood. 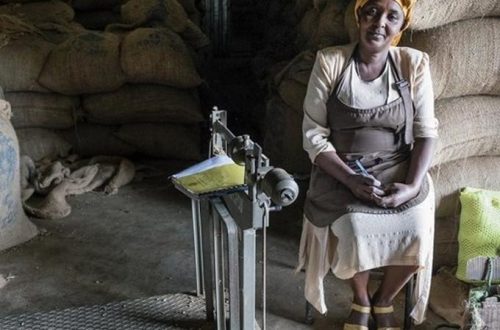 The Menja man we met is called Asfaw and says he is 55 years old. One of his hands was crippled by fire. He tells us he has eight children. Like all the Menja he lives isolated in the middle of a clearing. He continually repeats: «I would love to send my children to school ». «I would like to save up some money from what I earn from selling honey. And I would like to have my own buna cooperative. But I am a Menjan so I cannot do these things. Nobody listens to me and nobody gives me anything. If I could, I would grow coffee. Yes, this is my dream, to have a small plantation all of my own to provide a future for my children », he tells us, standing in the shade of those tall, majestic forest trees as his children listen in silence.