It is one of the most popular herbal plants and has been used as a raw plant material for drugs that have become more widely available commercially. In particular, it is used for treating human herpes and inflammatory skin diseases

Talinum paniculatum is known by various common names including Ginseng Java, waterleaf (Limon), cariri, Philippine spinach, potherb fame flower, sweetheart, Jewels of Opar, and Som Java. It is a low-growing herb and, for that, it is usually grown for food, its health benefits, and as an ornament. It can grow under harsh conditions and favors a hot climate. Botanically, Talinum paniculatum is a fleshy, erect herb, growing to 50 cm in height. Its leaves are in whorls, obovate-lanceolate, flat, glossy and bright green. Its flowers are in terminal panicles, small and pink colored and are borne in lax, many-flowered branched inflorescences, bright pink, and up to about 1.2 cm in diameter. The individual flowers, on hairy stalks, are small, but are nicely massed together, especially with the red bead-like buds and fruits.
The fruit is a glossy dark red capsule, 3-5 mm in diameter. Jewels of Opar is native to Africa. 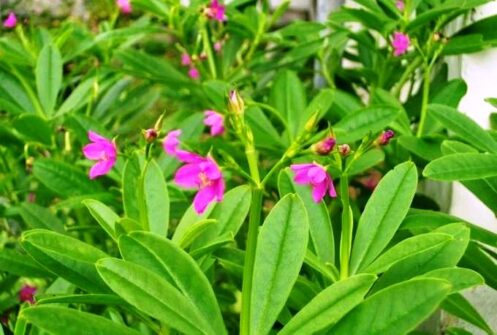 Talinum paniculatum is useful in treatment of a number of diseases and conditions including diarrhea, enuresis (bed-wetting), irregular menses and to boost energy and clear the lungs. In fact, its best known for its effectiveness in treating lung diseases. In addition, it can also be used as a medicinal herb in the treatment of skin infections, cancer, liver, reproductive disorders, as well as increasing resistance to stress and fatigue. This sweet, calming plant is used to tone the digestion, moisten the lungs, and to promote breast milk.The plant is useful for treating headaches, pneumonia, a surplus of urine, irregular menstruation, and vaginal discharge. The juice from the leaves is used to treat ulcers, and increase appetite. 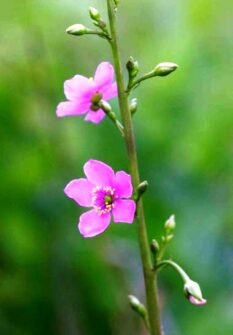 For its health benefits, Talinum paniculatum can induce sweating and also finds use as an enema for hemorrhoids. This vital plant is also used to treat liver and kidney problems. Some studies have shown that supplement extracted from the roots of Talinum paniculatum, has been found to be useful as an antiviral for treating human herpes and inflammatory skin diseases. It is used to treat gastrointestinal disorders, and general debility. Its leaves can be used topically in the treatment of edemas, minor skin scratches, cuts, and scrapes. Decoction of roots is used to treat scurvy, arthritis, stomach inflammation, and pneumonia. Talinum paniculatum is popular in herbal recipes for enhancing vitality, treating diabetes, inflammatory skin problems, gastrointestinal disorders, general weakness, bloating, constipation and nausea. The plant is also used to induce lactation and restore uterine functions postpartum.
The roots of Talinum  paniculatum can be administered to boost energy after sickness, treat coughs, regulate menses, and urine flow. The leaves can also be used to reduce body swellings such as boils where the leaves pounded into a poultice are applied to relieve it. The medicinal potential of Talinum  paniculatum may be due to the high level of antioxidants and compounds such as the ginsenosides, phenol acids, flavonoids, saponins and tannins present in it. It is also rich in vitamins and minerals such as vitamin C, iron, manganese, and zinc which could act as exogenous antioxidants obtained from the plant diet and hence may play an important role in reducing oxidative stress and cell damage. 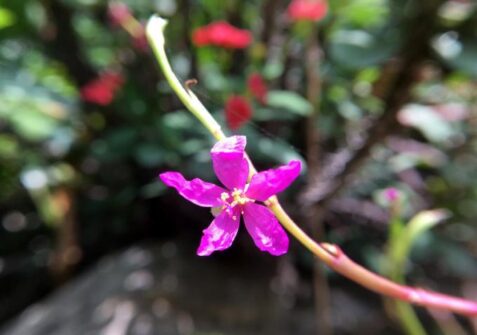 As food, nearly all parts of Talinum paniculatum are useable as vegetable but the roots and leaves are most preferred. The leaves are succulent and make an excellent addition to sandwiches. They are especially valuable since they are available in hot dry weather when other salad greens are difficult to come by. The seeds are tiny but nutritious, and a good source of Omega3 oils. Talinum paniculatum is packed with Vitamins A and C and is high in calcium. The leaves are cooked in a similar manner to spinach. Older leaves are tangier imparting a sour flavor to the dishes. It can be eaten raw as a salad or cooked as an ingredient of soups and stews. In the absence of spinach, Talinum paniculatum is a good alternative. In some countries, the plant is used to spice dishes. The leaves are blanched and used in green salads or cooked in soups and stews. The whole plant of ginseng java can also be used as an ornamental plant.