A poor woman takes a foreign mother into her house and looks after her sick daughter. She goes to the church and asks the missionary to pray that the child gets well.

In the eyes of many, Nyamuone is a woman of little account. Her husband abandoned her because, in his opinion, she was unable to manage the household the way he wanted. Now she has no home and she is always someone else’s guest. Even without a husband she has not stopped having children. At daybreak each day she sets out for the forest to gather firewood. She collects a bundle as big as she can carry on her head and carries it to the market to sell to the women cooking food, to get a little money to buy enough food to feed herself and her children that day. She spends the rest of the day doing odd jobs and can be seen in the streets, never idle. If needs be, she is not afraid to ask help from anyone she meets. 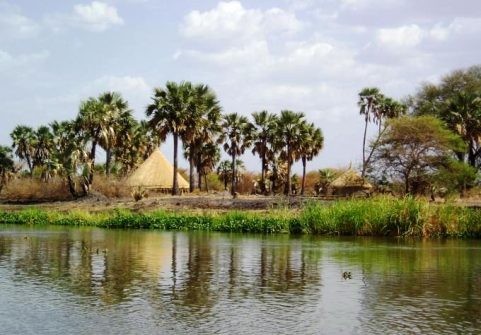 One morning I saw her in church, a place she was not familiar with. She approached me timidly and, almost prostrated herself before me. ‘Who knows what she wants’, I thought.  “My daughter is sick, she whispered, come and send away the evil spirit that is in her”. In the Nuer language, any incurable sickness is called a jock, an evil spirit in witchcraft.
At that time I was busy with catechism for the children so I encouraged her to go home and come back in the afternoon. She came back with three daughters: one was about four and the others twins about a year old. One of the twins was sick.  A closer look showed the healthy child in the arms of the four year-old with a nice, dark round face. The sick child in Nyamuone’s arms was light-skinned with straighter hair and a long nose. She looks slender and shows signs of malnutrition. I said: “Tell me the truth. These babies are not twins, are they?”. She nodded in agreement. “And are the other two yours?”. She nodded again. 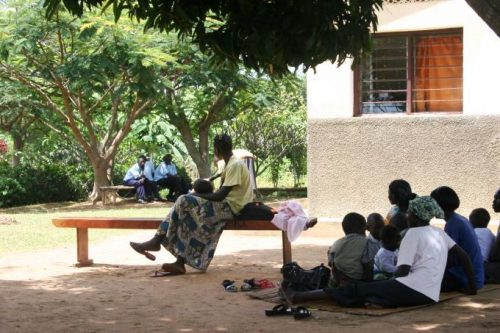 I then asked her to tell me her story. Following the armed conflict at Malakal, an Ethiopian woman came to Phom. Nyamuone saw her alone at the port and took her to where she herself lived. Nyamuone spoke only Nuer while the other woman had only a smattering of Arabic. Nevertheless, they understood each other quite well. Both were pregnant and, only a few weeks later, they each had a baby girl. The Ethiopian woman, however, was not well: she was weak and was visibly losing weight. Nyamuone looked after her as best she could and started nursing her new-born baby. 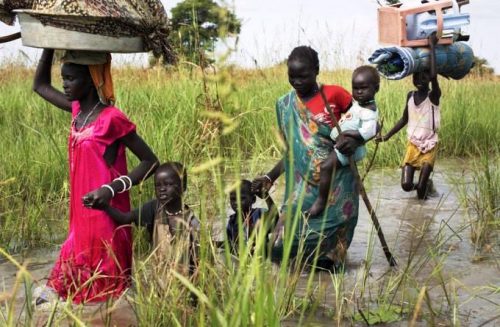 When Phom was attacked by the soldiers, they fled to the forest together with others forced from their homes. They had to stay there for about ten days with absolutely nothing. The Ethiopian woman’s condition worsened and she died.
“That is how the little girl became my daughter. Even though she was Ethiopian, she was no stranger to me. We know that the food of the children is always shared. We are all siblings and no one is left out”, Nyamuone explained. “It is also true that the mother will always pay more attention to her weakest child”. 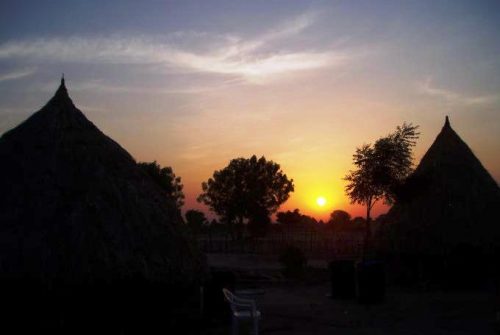 Seeing that the baby was not putting on weight as it should have, she brought it to the hospital at Fangak where the child was found to have tuberculosis. She was admitted and kept in isolation with other children to prevent her infecting others. The treatment would take quite some time. Nyamuone would have to work very hard every day to provide the daily needs.She ended her story asking for the prayers for which she came. We prayed together and she went away in peace, certain that the evil spirit had been driven out. The child could now get well without any further trouble.As I watched that woman slowly leaving the church, I began to see her in a different light. Nyamuone has great faith and I can only admire her great compassion and the help she is giving that child.
Fr. Christian Carlassare