Love for the people and the youth of ethnic minorities has borne fruit in the form of Caffè Bruno, a new brand of coffee now well known and available throughout Thailand.

Chae Hom is a plateau surrounded by mountains and is located in the province of Lampang in the north of the country. Agriculture is the main industry. Maize is grown on the former woodland slopes while tea and opium are grown on the higher ground. The latter has been replaced for some time now, at the request of the sovereign, by coffee plantations.
Father Bruno Rossi, an Italian missionary, who has spent more than twenty years working in the Land of Smiles, says: “It all began with a simple remark. The farmers were following the correct process: cleaning the harvested coffee beans and preparing them according to the washed Arabic process”. They would sell the coffee beans still in their external skin. With the help of some friends we managed to get a rudimentary coffee roasting machine. Unfortunately, we didn’t know how to use it properly and often burned the coffee beans. I well remember the horrible smell. We then looked for a better machine and eventually found a second-hand roasting machine. Using a demonstration video, we learned how to roast the beans without burning them”.
This was how Caffè Bruno came into existence in 2013. Bruno is a common word among the local people for whom it means ‘colour’ in the Thai language.  “We began to buy coffee, paying the producers well and adding no pesticides”, the priest continued.  “A young man has been trained to roast the coffee and four employees work in the office and in the packing department; once prepared, the coffee is sold”. 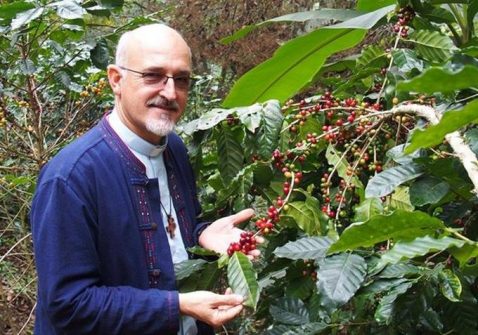 At first things were difficult: the new coffee brand was as yet unknown and the first customers were the priests themselves, their friends and the Catholic schools. There were times when the coffee would just accumulate in the store. This state of affairs went on until, in 2014, the high quality of the coffee was confirmed by the International Institute of Coffee Tasters which awarded it first prize.
«Today we sell seven, eight or nine hundred kilos a month – Father Bruno Rossi explains – and what is special about it? Its single origin and organic cultivation. We roast it to two grades: ‘Espresso’, which is best drunk hot, and then the “Dark” roast, best drunk cold. Here in Thailand, 98 per cent of coffee is drunk cold”.
“The business as such is not our priority – the missionary emphasises – This is a quality product and it improves the quality of life”. The slogan chosen for Café Bruno is ‘The Taste of Life’.  Last year we bought 130 tons of unshelled coffee beans, providing a number of people with work; we use the profits to finance scholarships for students”. 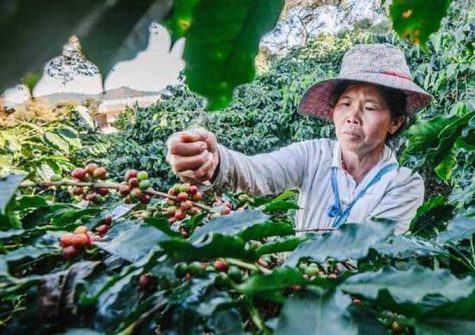 Faith is manifested and transmitted by example and the project at Chae Hom has become both testimony and ferment. “Meeting with oriental culture, people of other religions and non-believers, has led me to reflect on my own journey of faith, to question myself deeply on what we normally take for granted, to renew my motivation and confirm me in my vocation », the missionary says. More than four hundred children of the “mountain tribes” will now receive special help for their schooling thanks to the mission of Chae Hom and around half of these board full time at the hostels built and run by the missionaries themselves together with their local collaborators. All of this has been possible due only to the generosity of many people but, for the past four years, the project has been self-sustaining, thanks to the sale and diffusion of “Caffè Bruno”. 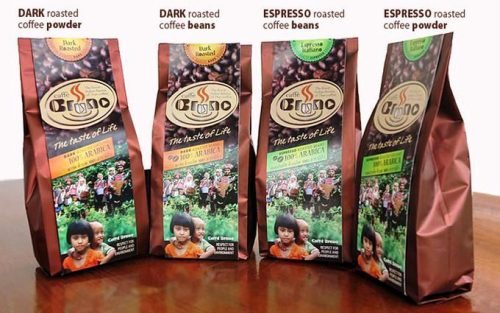 There has been a hostel at Chae Hom for some years now, for boys and girls, so that they can stay there during the week and attend secondary school. It would be impossible for them to attend school during the rainy season. There are now 65 students belonging to six different tribes, the majority of whom are Buddhists or Animists; some of the students, while living in the hostel, show interest in the Catholic faith.
There is also a day centre for the disabled, run by the Sisters of Charity of Saint Giovanna Antida Thouret.
On the road opposite the Centre there is a small coffee shop where people like to come and taste the new quality coffee. 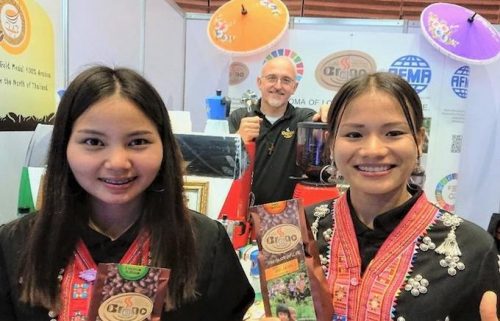 The first of two Caffè Bruno coffee shops, Caffè Duomo, was opened three years ago close to the cathedral of Chiang Mai and belongs to the diocese. Other products are also sold there. Profits are used for evangelisation and those of the coffee shop at the Bangkok Sacred Heart Institute are used for education grants.
The great demand for Caffè Bruno has caused it to become a powerful and unforeseen means to make the mission known and, through it, the Gospel. “In recent years, contacts have multiplied – Father Bruno concludes -.  Many have shown interest in our methods of organic cultivation and we have an ongoing project in collaboration with the University of Lampang”. (P.L.)