Seventeen abandoned children have been rescued from wandering around the streets and started ‘the trip of their lives’. They are part of a long-awaited educational project, which hopefully will take them, and many others like them, into a different future.

Juba, the capital of the South Sudan, lays on the left bank of the White Nile, about a hundred kilometres from the Ugandan border. The city has been, since the eighteen hundreds, the principal city in the South of Sudan, a vast region of 619,745 square km. With a population of around 500,000. On 9 July, 2011 when South Sudan officially became the 54th African state and the 193rd state in the world, Juba became the newest capital in the world. 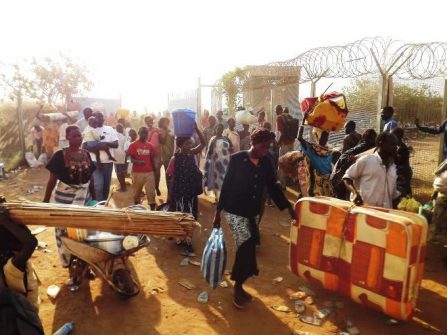 In December 2013, some Dinka militias loyal to President Salva Kiir began to clash with Nuer army soldiers, accusing them of planning a coup. The Nuer soldiers were led by Vice President Riek Machar who had been dismissed by Kiir a few days previously. The city became a battleground. Thousands of people took refuge in United Nations areas. Dead bodies lay in the streets. After talks and various negotiations, between President Salva Kiir and Riek Machar, a peace agreement was signed last July. Through the years, because of the war, many people had come to settle down in Juba. Many are children without parents. In the capital Juba, up to 3,000 children live on the street, and that number is increasing daily, said the Mind and Soul Institute, a local charity that works with street children. According to Bester Mulauzi, country director of programme development for Save the Children: “Children living on the streets face unimaginable dangers. They risk being forcibly recruited by armed groups and are more likely to be abused and exploited”.

Wearing the blue colours of London Chelsea soccer team, Johnson and his companion are sitting at the back of an open four-wheel-drive vehicle parked in one of Juba’s  main streets.  Anyone who sees these children dressed in blue has to pay attention to them. It is a weird sight in a country that has been ravaged by civil war and stricken by poverty for many years now. In fact, soon some people come near, “are you a school football team? Which school do you belong to? Have you come to challenge the team of a neighbouring school?” The answers to the questions are not simple, and go beyond the appearances. Fr Paolino tells the curious ones a very sad story: a story of abandonment, drug abuse, juvenile crime, poverty and a chain of unending sufferings. 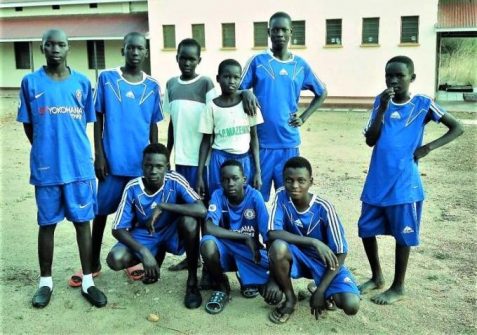 It all started when Paolino Tipo Deng, a South Sudanese Comboni missionary priest, bumped into those children, who were living in appalling conditions. No sooner seen than done! He took upon himself the task of doing something to change their situation, and prayed that God could help him in his purpose. Today he oversees an educational project which, hopefully, will take at least a hundred children out of the streets of the capital and give back to them an opportunity to study and enjoy their childhood for the first time in their lives. 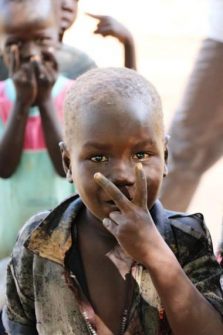 The building in which Fr Paulino had found the children was in a shambles. “An authentic rat’s nest, – remembers the father – it’s an old religious formation house, abandoned many years ago. You can imagine what it may look like now, after many years of war and strife. Everything is in ruins. It lacks even the most basic services. And yet, it was – and still is – the refuge of about one hundred street boys. That hovel was the only home they knew. They were sheltered by night, and also fed during the day. Somebody had carried out some works of maintenance, and so they could enjoy one decent shower cubicle”.One day with another two Comboni missionaries Fr Paulino went to see the place. They were struck by the look of it. They found the children kicking around a deflated soccer ball. When the children saw them, they all ran to greet the visitors. “What are you doing here?”, one of the fathers asked them. “Nothing”, was the answer of one of them, with a big smile on his face. An explanation followed: “This is the orphanage of the zone!”

One of the two missionaries who had visited the ‘orphanage’ wanted to accompany Fr Paulino in his trip to take the first group of those street children to their new destination. After a 40-minute drive, including a short stop to refresh the passengers with some soft drinks, the group arrived at the Good Shepherd Peace Centre in Kit Kolye village, south of Juba town. It is a beautiful centre for human, pastoral and spiritual formation, the first of its kind in the whole of South Sudan, opened in October 2016, furnished with a chapel, a refectory and accommodation for up to 35 retreatants, and cared for by a religious community under the umbrella of ‘Solidarity with South Sudan’, an inter-congregational initiative to foster peace and justice in the country. 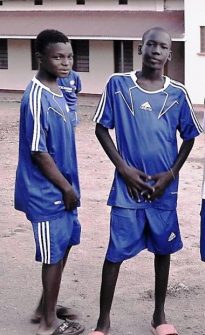 No doubt, the children were impressed by the beauty of the compound. As they jumped off the pickup, one of the missionaries asked them: “Well, boys! What do you think?”, waiting for the reply. No one said a word: all were busy taking in through their eyes that new fantastic world they were in. Only one, the youngest, after a while, cried out: “This is our new home!”: “Not really, replied the father, yours is somewhere else, but not less beautiful”: The little boy looked at him, smiled, took his sunduk (a metal trunk) from the back of the car, and, like the others, received from Fr Paulino a padlock and a key: “You will keep your belongings in this metal box. From now on, you are responsible for all the toiletries and educational materials you will be given during the whole year. And do not lose the key”. I wish I was there to see their faces. Before this, they did not have anything; now all their hopes were kept and locked in that trunk.They spent some nights at the Centre. Then they were carried to their true ‘home’; at least for a year: ‘Brother Augusto Memorial’ Primary School, an educational boarding facility run by the Saint Martin de Porres Brothers, a local congregation founded by two Comboni Missionaries, Bishop Sixto Mazzoldi and Fr. Giovanni Marengoni. There, in few days, the brothers had prepared brand new huts for the 17 children just next to the school. 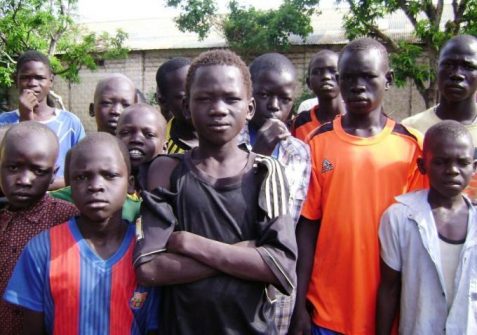 Fr Paolino gathered the children and said: “Listen carefully to me, and keep my words in your minds and hearts. Do not throw away this chance. Be brave. The road ahead will be challenging and difficult. Never get discouraged. Always keep up hope. And know that the success of this project we launch today is in your hands”.He paused for a moment, then added: “Among you I can see the new president of South Sudan and the future ministers of our country. Do not disappoint the great expectations we have put on you all”. He looked at them and studied their faces intently for long moments. He was absolutely sure that they had listened with much attention, and he could see their faces alight with great ideals, immense hope and a clear determination.

Fr. Paolino talking with another missionary said. “When I first saw these children, forsaken and roaming around the streets of Juba town, I knew I could not witness their situation and do nothing about it. I am thinking about the rest of them still living in that hell-like ‘orphanage’: I want to do something also for the other orphans who do not have even that rat’s nest to spend the night and get some food. I want to work out some plans for all the street children and for all the many youngsters that still roam around the town”.He continued: “I know what I have to do. First, I will restore radically the orphanage and also I will build proper boarding accommodation for at least 100 children next to the Brother Augusto Memorial Primary School. I will need many resources, not only to put up structures, but also to run them. Gosh, without realising it, I have become their foster parent”. Actually, he is more than a foster parent. He is the true father for these children.