Right in the middle of Eurasia, in that mass of land known as ‘The Heart of the World’, we find Kazakhstan, impervious, legendary, and fascinating – the land of fiery bloody sunsets that bewitched the passage of many merchants en route to China by way of the silk road.

Its natural beauty, together with its varied landscapes, number Kazakhstan among the most seductive countries of Central Asia and make it the most flourishing country of the entire region.
The territory, so vast that it covers three different time zones, has an area of 370,373 Km2, sharing 1,500 Km of border with China to the east, with Russia to the west and north and with Kyrgyzstan, Uzbekistan, and Turkmenistan to the south.
To the north, where it joins Siberia, the border is not well defined, while to the east it is watered by the Caspian Sea.
Although its political confines make Kazakhstan an Asian state, its geographical peculiarity makes it transcontinental since it lies astride two continents: ‘Geographical Europe’, whose border is marked by the Ural River, and Asia. 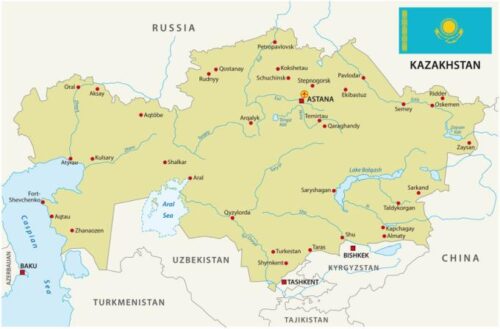 The marvels of its territory, its hostility, and the variety of forms it presents, are profoundly intertwined with the history, mythology, and culture of the Proto-Turkish and Proto-Mongol populations who, in the second millennium BC, began to settle in those places which, until then, were considered ‘no man’s land’, giving existence to the ‘Empires of the Steppes’. In 1919, the territory definitively became part of the Kazak Soviet Socialist Republic and an integral part of the future Soviet Union. This change was such that it led to a process of industrialisation, urbanisation and the sedentarisation of the Kazaks. The Soviet regime isolated the elite of traditional society and tried to introduce egalitarian and socialist principles which were completely at odds with the hierarchical and traditional principles followed until then.
Moscow immediately set about making the country into a laboratory for social, cultural, agricultural, industrial, and nuclear experimentation with an impact that turned out to be negative both in social and environmental terms. There were several motives for the Soviets deciding to move in this direction, one of which was the geographical position of the country far from the lines of confrontation with the West. Because of this they made Kazakhstan the main centre of war materiel and experimentation of the Soviet Union. Besides the strategic motivations, others were purely economic and dictated by the desire to promote the development of the mining industry and heavy industry close to coal and oil deposits and to place virgin lands under cultivation. 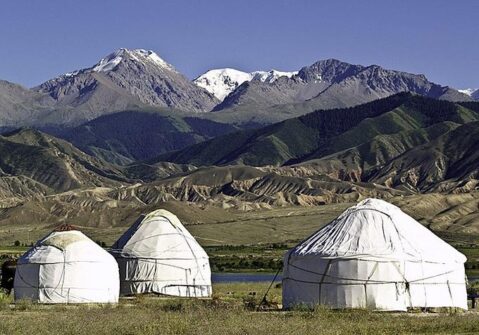 The process of industrial development generated considerable migration flows which helped to implement that process of demographic metamorphosis, thus transforming the region into a social laboratory within which the ethnic cultural and religious cross-breeding would produce the new man, Homo Sovieticus.
These transformations underwent a process of intensification during the period of the war to increase the workforce in the factories. This brought about the transfer of many Slavic and German workers’ families from the Volga. These were forced towards the north and northeast of Kazakhstan for fear they would collaborate with the enemy.
Then it was the turn of the Tatars of Crimea, the Georgians (after the revolution, they had set up an independent state and had fought against the Red Army), and the Muslims from the region of the north of the Caucasus Mountains. The Koreans received similar treatment between 1945 and the death of Stalin. 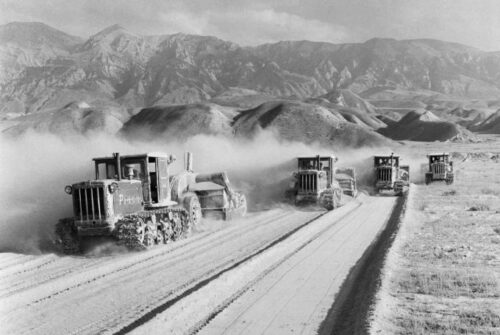 The Virgin Lands campaign was designed to utilize new land for agricultural production was launched in 1954.

The campaign launched by Nikita Khrushchev for the cultivation of the ‘virgin lands’ led to a further wave of colonists. The proportions increased in the seventies with the arrival of Ukrainians and Russians, motivated by the incentives offered by the government of Moscow to promote the plan to bring heavy industry closer to the deposits of coal, gas, and oil of Central Asia. These migratory policies made Kazakhstan the only Soviet republic where the people of the nationality after whom the country was called were a minority in their own country.
As regards agricultural experimentation, in 1917, the government of Moscow had already implemented a campaign of incentives to promote the cultivation of cotton, offering nomads and peasants apparently advantageous conditions. The situation began to worsen in the sixties at the time when the Soviet leadership made self-sufficiency its goal, making Central Asia the major supplier of the entire Soviet Union. To this end, the dissolution of the grasslands for the cultivation of cereals and wheat went ahead. 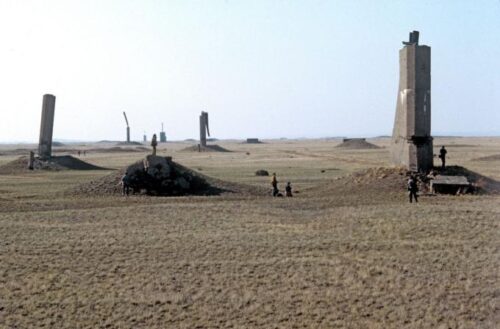 Semipalatinsk Nuclear Test Site was the anvil on which the Soviet Union forged its nuclear arsenal.

To increase the area under cultivation, mastodontic irrigation projects were carried out, changing the course of the Amu Darya and Syr Darya rivers bringing water down from the eternal Himalayan glaciers and emptying into Lake Aral. Water drawn from the rivers to supply dams and irrigation canals excessively reduced their flow. This phenomenon, besides failing to sufficiently increase the waters of the lake caused, over a period of time, the drying of the river deltas, leaving behind stagnant wells and desert. The environmental impact of this project was sufficient to cause a 75% reduction in the surface area of the lake, the extinction of most of the ichthyofauna and serious harm to the ecosystem of the area that previously contained a high degree of biodiversity.
Kazakhstan was also the centre for the main nuclear experimentation laboratories of the Soviet Union, as well as the most important nuclear and missile firing ranges, for bombing exercises, for test-firing ballistic missiles and air defence systems. In addition, Kazakhstan houses the Baikonur space centre, a most important Soviet technological-military installation and, up to 1994, the base for launching all military, spy, and communications satellites. (F.R.)
Open photo. Credit © Can Stock Photo / Cobalt70